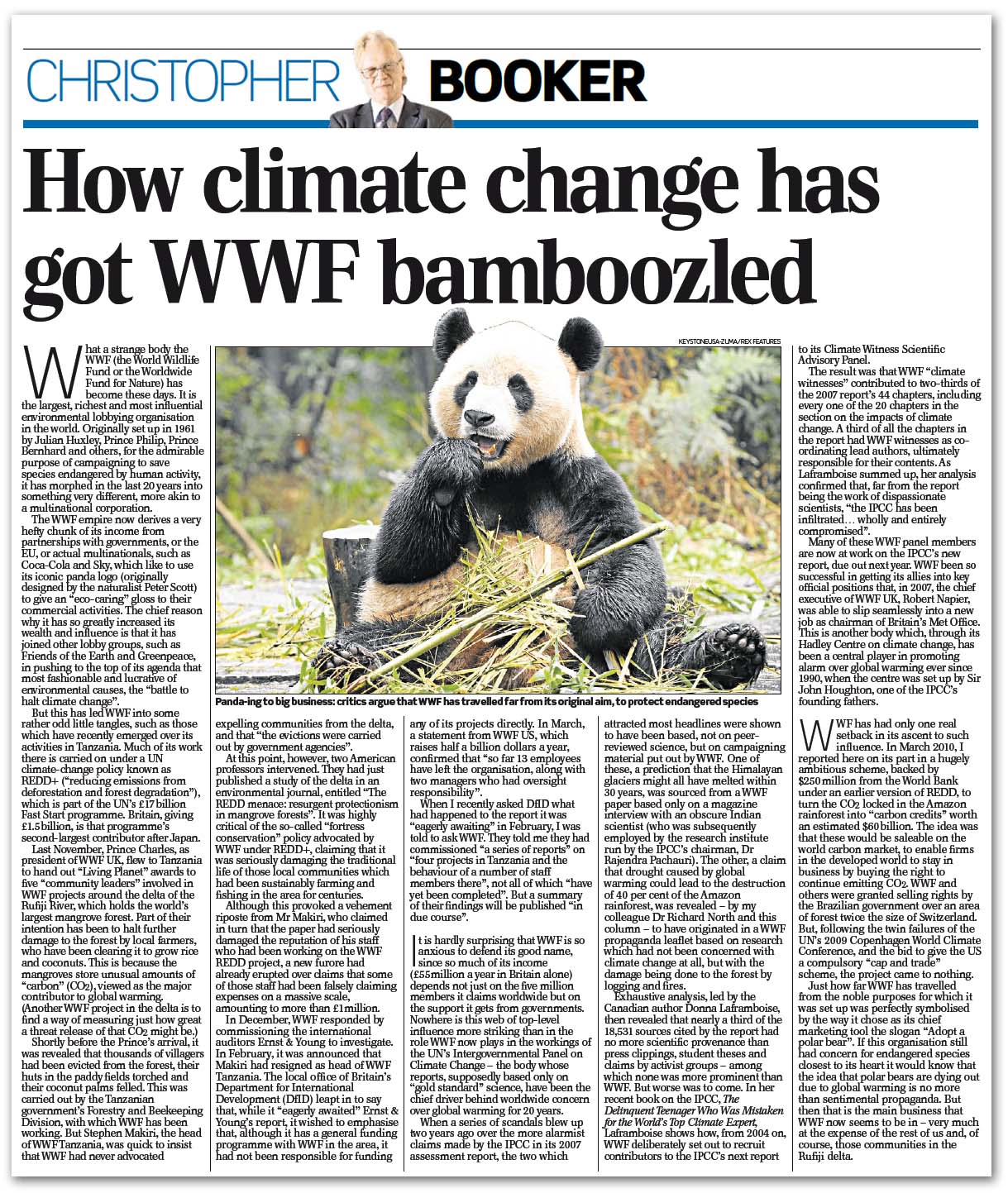 Booker today takes his microscope (or periscope if you prefer) to that strange body the WWF. Ostensibly an environmental charity, this is actually the largest, richest and most influential environmental lobbying organisation in the world.

Originally set up in 1961 by Julian Huxley, Prince Philip, Prince Bernhard and others, for the admirable purpose of campaigning to save species endangered by human activity, Booker tells us it has morphed in the last 20 years into something very different, more akin to a multinational corporation.

The WWF empire now derives a very hefty chunk of its income from partnerships with governments, or the EU, or actual multinationals, such as Coca-Cola and Sky, which like to use its iconic panda logo (originally designed by the naturalist Peter Scott) to give an "eco-caring" gloss to their commercial activities.

And, of course, no good multinational corporation these days is worth its salt unless it has bought into the crise du jour, the "battle to halt climate change". This is the chief reason why WWF has so greatly increased its wealth and influence, having aligned itself with other lobby groups, such as Friends of the Earth and Greenpeace.

But, pushing to the top of its agenda that most fashionable and lucrative of environmental causes has led WWF into some rather odd little tangles, such as those which have recently emerged over its activities in Tanzania.

The work in this quaintly termed "less developed country" is a vast ponzi scheme devised under the aegis of the UN known as REDD+ ("reducing emissions from deforestation and forest degradation"). Currently, it is financed by the UN's Ł17 billion Fast Start programme. Britain, being so flush with funds that it can't get rid of our money fast enough, is pouring Ł1.5 billion down that particular drain, second only to Japan in a prolonged attempt at ritual suicide.

Supporting the programme is the world leader in hypocrisy, no less than Prince Charles, who has found his true role in life as president of WWF UK. Last November, he flew out to Tanzania on a PR mission for his greenie mates, handing out "Living Planet" awards to five "community leaders" involved in WWF projects around the Rufiji River delta.

This area holds the world's largest mangrove forest and part of the WWF scheme is to halt what they call "damage" to this pestilent swamp, stopping local farmers from clearing it in order to grow life-sustaining rice and coconuts.

The justification for what is known as "eco-imperialism" is that these swamps are supposed to store unusual amounts of "carbon" (CO2), which means that, to make it look good, the farmers had to go.

Thus, shortly before Charlie Boy's carefully orchestrated arrival, it emerged that thousands of villagers had been evicted from the forest, their huts in the paddy fields torched and their coconut palms felled.

To allow for plausibly deniability, this was carried out by the Tanzanian government's Forestry and Beekeeping Division, with which WWF has been working. But Stephen Makiri, then head of WWF Tanzania, was quick to insist that WWF had never advocated expelling communities from the delta, and that "the evictions were carried out by government agencies".

Booker kindly informs us that, at this point, two American professors intervened. They had just published a study of the delta in an environmental journal entitled, "The REDD menace: resurgent protectionism in mangrove forests".

Being an honest production, it was highly critical of the so-called "fortress conservation" policy advocated by WWF under REDD+, interfering with natives who had been farming and fishing in the area for centuries. The claim was that this slow-motion genocide (for that, in effect, is what it is) was seriously damaging the traditional life of those local communities – which is what slow-motion genocide tends to do.

Predictably, this provoked a vehement riposte from Mr Makiri, who claimed in turn that the paper had seriously damaged the reputation of his staff who had been working on the REDD project.

By then, however, these saintly examples of the human race had been involved in a furore over false expenses claims on a massive scale, amounting to more than Ł1 million. One can only presume that they had been watching rather too closely British parliamentary practice.

It was pretty obvious that this needed to be kicked into the long grass – the longer the better – so in December, WWF responded in time-honoured fashion. It expended untold thousands of donors' money by hiring one of the most expensive international auditors in the business, Ernst & Young, who could be relied up to investigate the thefts in the right way.

Unfortunately for Mr Makiri, that meant he had to go and, in February, his resignation as head of WWF Tanzania was announced. This gave sufficient distance for the local office of Britain's Department for International Development (DfID) to leap in to say "nothing to do with us guv". It only gives the money to WWF in the UK and lets it decide how it gets stolen.

Officially, that meant that, while it "eagerly awaited" Ernst & Young's report, DifiD wished to emphasise that, although it has a general funding programme with WWF in the area, it had not been responsible for funding any of its projects directly.

Aware of the possible international implications of the theft, that left WWF US to pitch in with a statement, seeking to protect its half-billion dollar annual revenue stream. In March, it thus told us that, "so far 13 employees have left the organisation, along with two managers who had oversight responsibility".

Booker has tried to get more detail from DfID, but they passed him on to WWF, which is doing everything it can to burying this. The report, which was due out in February is not yet available and has become a "series of reports" not all of which "have yet been completed". But a summary of their findings will be published "in due course".

And this is only about half of the Booker article which also takes in how the WWF has hijacked the IPCC, and the exhaustive analysis by Canadian Donna Laframboise, which led to her recent book on the IPCC, The Delinquent Teenager Who Was Mistaken for the World's Top Climate Expert.
Booker also deals with our earlier work on REDD, a scheme so mired in corruption that it is ready-made for the likes of WWF, to which dissimulation comes as second nature.

At the conclusion of his report, Booker notes that an indication of how far WWF has travelled from the noble purposes for which it was set up was perfectly symbolised by the way it chose as its chief marketing tool the slogan "Adopt a polar bear".

If the WWF still had concern for endangered species closest to its heart, he writes, it would know that the idea that polar bears are dying out due to global warming is no more than sentimental propaganda. But then that is the main business that WWF now seems to be in – very much at the expense of the rest of us and, of course, those communities in the Rufiji delta.