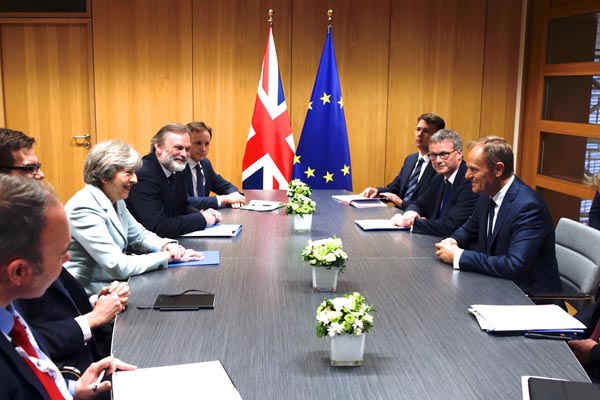 Mrs May has been in Brussels, having lunch with Angela Merkel and communing with European Council President, Donald Tusk. The hour-long meeting with Tusk, we are told, included a "frank discussion" about the extremely tight timeline that the UK now faces and the clock counts down to December.
Tusk, it appears, set the 4 December – ten days - as the "absolute deadline for the UK to make additional efforts" that would clear the way for Michel Barnier to advise the European Council that "sufficient progress" had been made in the three "phase one" issues.

That is the day Mrs May is set to dine with Jean-Claude Juncker, leaving the Prime Minister to depart empty-handed. Had she been a lesser person, she might have worn a teeshirt bearing the legend: "I went all the way to Brussels and all I got was a lousy tweet" – as well as a nice snapshot (above).

Picture aside, all she did get for her trouble was a tweet, with Tusk saying: "Sufficient progress in Brexit talks at December European Council is possible, but still a huge challenge. We need to see progress from UK within ten days on all issues, including on Ireland".

Here we go again, the same old, same old. Nothing has changed and, of course, nothing will change until all three of the "phase one" issues have been settled. And perhaps that simple fact is percolating into the dim consciousness of Mrs May who, according to Downing Street has conceded that Northern Ireland's membership of the EU customs union after Brexit is "a matter for negotiations".

According to RTÉ, Leo Varadkar has previously suggested adopting "bespoke" arrangement similar to that operated on the Isle of Man. This would have Northern Ireland, or even the whole of the UK, continuing to observe the rules of the single market and customs union without necessarily remaining a member of either.

Predictably, though, DUP leader Arlene Foster warns against any divergence between the regulatory framework of Northern Ireland and the British mainland.

"What we don't want to see is any perception that Northern Ireland is in any way different from the rest of the UK", she says, "because that will cause us great difficulties in relation to trade. The single market that really matters to us is the single market of the United Kingdom".

That leaves the Downing Street spokesman offering platitudes about the need to continue to negotiate "to find an innovative way forward". But that means dealing with Foreign Affairs Minister Simon Coveney who insists, as always, that EU leaders would not give the green light for the phase two negotiations at the December council unless there was progress on the border issue.

In a nicely caustic comment, he dismisses British assurances as "aspirational". The had to be, he says, a "credible roadmap" from the UK setting out how they would ensure there was no return to a hard border. "We can't move to phase two on the basis of aspiration", Coveney remarks.

The thing is though, the Irishman isn't really very much clearer about what he wants than the UK Prime Minister. He talks of "regulatory divergence between the two jurisdictions on the island of Ireland", whence he says, "it is very hard to see in that scenario how you avoid hard border checks". Mr Coveney thus wants progress "in the context of the regulatory divergence issues".

This is almost a bad as the idiot David Davis who also sees issues in terms of regulatory convergence. Neither he nor, it seems, Coveney, understand that the absence of a border requires far more than this. One wonders where this is going, if neither party is addressing the practical realities of border relations.

Nonetheless, there is no hint that Coveney is going to give in easily – whatever it is that he actually wants. His deadline remains December so that we can all move on. "If we can't", he says, "then I think there is going to be a difficulty coming up".

One difficulty that no one anticipated was the collapse of the Irish government, which is a distinct possibility after the opposition tabled a no-confidence vote.

Come what may, though, there is still going to be a "difficulty" – even if the Irish question is settled. That much we're getting from Sir Ivan Rogers who is also using the "a" word, telling us that Theresa May can hope for no more than an "aspirational" and "purely political" agreement on free trade before Britain leaves the EU.

Sir Ivan was delivering a lecture on EU-UK relations at Oxford University's Weston Library, stating that, like David Cameron before her, Mrs May would run up against the EU's attachment to "legal form and processes". She will find that "at very best", the EU would agree to a "political agreement" about future trade, not a legal agreement.

It was also "obvious", Sir Ivan said, that the EU would offer "far less on market access" than the UK currently enjoys, and that its negotiators would be unlikely to take seriously any British threat to walk away.

"The threat to walk out to go to WTO-only terms with the EU", he added, "must totally contradict the UK's own sober assessment of its best interests post Brexit". It can thus "safely be assumed that the UK government sees huge economic value in not going there".

Yet, precisely where the government is going no one can begin to work out – least of all Mrs May herself who, to judge from her comments after the Tusk meeting, still seems to think that her Florence speech carries weight. And this is the speech where she thinks we will conclude a free trade deal with the EU and be looking to a two-year implementation period.

Simon Jenkins, on the other hand, refers back to the Irish border problem and argues that the UK government must announce it will remain in a customs union with Dublin.

So here we have yet another epic example of issue-illiteracy, another pundit proposing something which simply cannot happen. Yet, despite that, such nostrums suddenly become fashionable and, for a brief period, they will be seen as the only solution in town.

Small wonder, with nothing credible on the table, a "no deal" outcome to the Brexit talks is regarded as the most likely result of the talks.

This is the finding of a recent poll which had 13 percent of respondents expecting continued membership of the Single Market, 15 percent expecting a limited trade deal, 16 percent anticipating a comprehensive trade deal and 17 percent the "no deal" outcome.

If more had been acquainted with Sir Ivan's views – and the impossibility of concluding any trade deal with the EU, prior to Brexit, became better known, the scoring of the "no deal" option would, most likely, have been considerably higher.

Nevertheless, despite the expectations, a "no deal" result is not the most favoured option. Continued membership of the Single Market is the most popular option, with 24 percent backing this outcome, against 17 percent for a comprehensive trade deal, 14 percent backing a limited trade deal and 11 percent "no deal".

For once, it would seem, this blog's sentiments reflect the mainstream – with the so-called "mainstream media" trailing behind. In fact, the legacy media has always been behind the curve, alongside the most politicians who simply don't have a clue.

But, since everybody seems to be into "aspirations" for the moment, a means must be sought of bringing public expectations into line with their aspirations. Not only is continued membership of the Single Market the most popular public choice, it is the most sensible. That the public expects it to be the least likely says a great deal about the state of British politics.