2016-06-23 03:02:37
One of the compulsory course reading books student public health inspectors were presented in my time (and probably still are, as they go to university to take their environmental sciences degrees) was a manual on communicable diseases.
We had to be familiar with the terrors of smallpox, cholera, typhoid and even green monkey disease (which was then emerging as yet another threat – to say nothing of pneumonic plague).

Each disease was summarised in standard format in two pages, with the last category always being the treatment. And as a rule of thumb, the longer the list of cures, the less effective any of them were likely to be. The entries on diseases for which there were certain and effective treatments were usually a model of brevity.

So it is with reasons for leaving the European Union. The longer the list, the less convincing it is – and the easier it is to find excuses for disagreement. But then, we only need one reason to leave. That is good enough – so powerful that it transcends all others.

Essentially, today is our opportunity to correct an historic mistake. Politicians and others in the 1960s and early 70s, looking at the apparent success of Continental economies, and mistakenly believing this to be a function of the then Common Market, made the further mistake of believing that joining this construct would help cure Britain's post-war economic ailments.

Others who were fully aware of the integrationalist agenda, such as Ted Heath, had different ideas. But the fact is most people thought we were joining an economic union.

So prevalent is this myth that, to this day, many Conservative MPs still believe that we joined a Common Market that somehow lost its way – round about Maastricht – and started down the path to becoming a European "superstate".

Myth or not, it is fair to say that there is no popular mandate for joining of putative United States of Europe. And then, on the other hand, there is nothing that could be achieved by way of economic and other forms of neighbourly cooperation that could not have been achieved by other means.

To sum it up in a nutshell, in 1973 we joined a supranational construct, ostensibly devoted to securing economic cooperation, when the same end could have been achieved by intergovernmental means - a looser and healthier form of association.

To have joined a supranational body was a mistake then and - as the Communities have grown to embrace 28 members – that mistake has become even more apparent. And, as we see the march of globalisation, while we are chained to "little Europe" in what is becoming a global backwater, the mistake has assumed colossal proportions.

Thus, today, 23 June 2016, the hundredth anniversary of the battle of Verdun from which came the intellectual driver of the European Union construct, we have the opportunity to correct an error.

In so doing, we are not leaving "Europe" – nor even travelling in a markedly different direction. The image of the signpost (above) sends the wrong signal, which has us going in almost opposite directions.

A better image would be the one below, with multiple trains travelling on roughly parallel tracks. Each is free to travel at its own speed and to stop at stations of their choice. Some may share the same destination, others may not. Still more may share part of the journey, diverging only as they travel on to reach their final destinations. 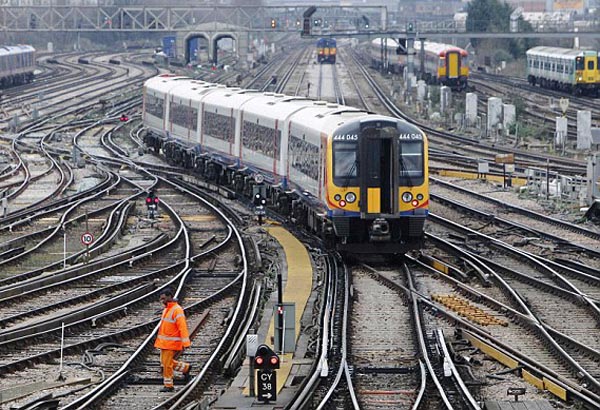 In fact, there is no destination. The affairs of a nation are a journey. We the people are passengers in a journey through time. We depart and others climb on, then to depart in a never-ending progression. We can decide on the speed and direction – to a certain extent, but never the ultimate destination. That is unknowable.

But if today we decide that it is necessary to travel in a different direction, uncoupling ourselves from the EU train, we should not be concerned with the immediate consequences. Undoubtedly there will be a cost, but it is likely to be minimal and, as we point out in Flexcit, there is no need whatsoever for leaving the EU to be a leap in the dark.

Neither should we have any false or exaggerated expectations of the outcomes of our choice. Many will argue, for instance, that leaving offers us a chance to restore our democracy, except that this is a country which has barely if at all experience democracy and, with the current London-centric political classes in place, we are hardly ever likely to.

In fact leaving, in itself, achieves nothing and gives us nothing. It is not an end but a means to an end – a change in our status which enables us to make better and different decisions if we choose to do so. It does not guarantee that we will make those decisions or, necessarily, secure us better outcomes.

To leave, therefore, is to open us new opportunities for ourselves as a nation – it is an investment in a future, a better future than can be achieved as members of the European Union. It is an expression of faith and confidence in ourselves.

As such, no one should let themselves be influenced by the official referendum campaigns. Both have been inept neither have even begun to address the issue – the real issue – as to why we should leave. From the mouths of none of the campaigners do I recall having heard the words "supranational" and "intergovernmental".

Yet if we go back to the Parliamentary debates of the 1950s through to the 70s, when we actually joined the EEC, these two terms were part of the common currency of discourse, with MPs from both sides – and their Lordships – completely familiar with them, their respective meanings and the implications of choosing either.

In that broad historical context, the "remains" are quick to assert that Winston Churchill would have supported our membership of the EU, citing his 1946 Zurich speech. But here we have Churchill speaking in a 1950 debate in the House of Commons, on the Schuman Plan.

This is an occasion when MPs are talking about specifics, and the supranational nature of the proposed construct is well recognised – as is its role as a precursor to a "Federal Union of Europe" (to use Churchill's own words). And in that debate, he asked: "what association should Britain have with if such a thing should come to pass in the course of time?"He then answered in these terms:

It has not got to be decided today, but I shall give, with all humility, a plain answer. I cannot conceive that Britain would be an ordinary member of a Federal Union limited to Europe in any period which can at present be foreseen.

Churchill was very much in favour of helping developments on the Continent. We should, he said, "help, sponsor and aid in every possible way the movement towards European unity. We should seek steadfastly for means to become intimately associated with it". But, he said:

We must find our path to world unity through the United Nations organisation, which I hope will be re-founded one day upon three or four regional groups, of which a united Europe should certainly be one. By our unique position in the world, Great Britain has an opportunity, if she is worthy of it, to play an important and possibly a decisive part in all the three larger groupings of the Western democracies. Let us make sure that we are worthy of it.

This was exactly a reflection of his Hague speech in 1948, where he argued for the United Nations to be the "paramount authority" in world affairs, but with regional bodies as part of the structure. They would be "august but subordinate", becoming "the massive pillars upon which the world organisation would be founded in majesty and calm".

Effectively, a New World Order would comprise a hierarchy of three tiers – national, regional and global. In the European context, this would include all the nations in continental Europe.

While was clearly Mr Churchill's ambition for that moment, what has actually emerged is not a dominant regional but a sub-regional entity. This is the European Union, which has assumed the role and many of the powers of a regional entity, without actually being one.

But, as we point out in Flexcit, that true European regional body does exist in the United Nations Economic Commission Europe (UNECE). Established in 1947, it has as interesting history, initially under its first executive secretary, Gunnar Myrdal. In the organisation of UNECE, we now have the a body which could manage a genuine Europe-wide single market, outside the grip of Brussels, run on a truly intergovernmental basis.

That is one of the many options open to us should be choose today to correct that historic mistake. And, to that effect, we need no other reason to cast our vote to "leave". Membership of the European Union is not for us. Joining the EEC in 1973 was a mistake. We would be perpetuating that mistake if we did not vote to leave now.