EU Referendum: of no greater authority

2016-06-11 20:07:54
Much has been made in the legacy media today of the intervention in the referendum debate by German finance minister Wolfgang Schäuble in a special edition of Spiegel magazine (paywall).
Although the edition is addressed to the British people with the legend "please don't go" and 23 extra pages in English, the publishers are evidently not that concerned about their message reaching us, as they have neither waived the 3.99 cover-charge, nor revised the tortuous signing-up procedure, which is available only in German.

That sort of sends its own message: we want you to stay, but only if you give us your money and speak to us in German. And, incidentally, the United Kingdom doesn't exist. To the concerned Germans, we are "Great Britain". Northern Ireland can go hang itself.

Anyhow, cutting to the chase, for our money we are treated to a ponderous, 2,500-word interview with Schäuble, who openly admits to being the "only top German politician who has travelled to Britain to campaign for the country to remain in the EU".

This he justifies on the basis of having George Osborne allay his fears about the utility of his interfering, whence he decided to explain to the British public why he believes that "it is better for the EU and Britain if voters decide against Brexit".

With it firmly fixed that here is a politician actively campaigning to keep the UK in the EU, we then get to the "money quote" which has been picked up by so many of the UK newspapers.

Asked by the magazine why it is better for the British to remain in the EU, Schäuble argues that "Britain is economically very closely integrated with its European partner countries". If ties were to be cut, he says, "it would be a huge step backwards for the country and would weaken it considerably". In the era of globalisation, he adds, "splendid isolation" is not a smart option.

The magazine counters with the suggestion that "Britain could continue to enjoy the benefits of the single market without being an EU member, in the same way that Switzerland and Norway do". To this, we get the "killer" response from Schäuble:

That won't work. It would require the country to abide by the rules of a club from which it currently wants to withdraw. If the majority in Britain opts for Brexit, that would be a decision against the single market. In is in. Out is out. One has to respect the sovereignty of the British people.

Some claim that this represents Schäuble attempting to block the UK's post-exit membership of the EU, but textual analysis alone clearly rules this out. The man thinks the Efta/EEA (interim) option wouldn't work. And that is on the basis of his interpretation that a vote for Brexit by the British people necessarily means a rejection of participation in the Single Market. 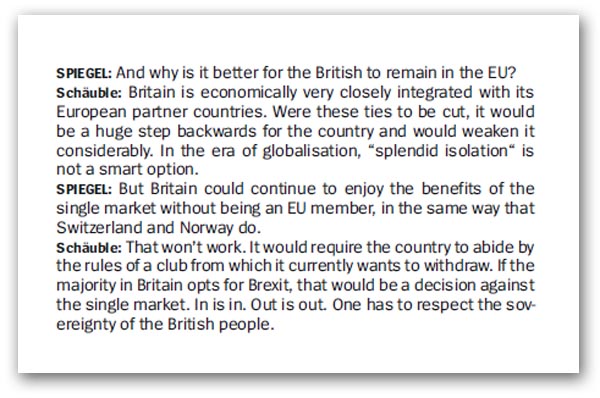 What we have therefore, is an opinion based on an assumption, and nothing more than that  from a politician who is not a head of government, and who may not even be in office by the time Article 50 negotiations start in earnest.

Denis Staunton of the Irish Times puts it in perspective: his statement "carries no greater authority than any other speculative intervention". And indeed it doesn't. The finance minister is just another noisemaker in a debate polluted by noise.

Furthermore, if we go deeper into the text of the interview, we see Schäuble admitting that a withdrawal of the magnitude of Brexit "does not take place overnight". It would, he says, "be preceded by lengthy negotiations".

The very idea of "lengthy negotiations" necessarily requires an exchange of ideas, discussion and  most often - a degree of compromise. Therefore, the position held by Schäuble as part of a self-declared attempt to influence the EU referendum can hardly be taken as a definitive statement of what his post-referendum negotiating position would be.

Nevertheless, we still get the likes of The Times, claiming that Schäuble has "warned that it will shut Britain out of the single market if voters opt for Brexit in the European Union referendum". This plainly is not true and is an obtuse, if not malicious misrepresentation.

The same lie is perpetrated by the Guardian claims that Schäuble "has slammed the door on Britain retaining access to the single market if it votes to the leave the European Union".

As for the Telegraph, it simply pronounces, without any further explanation, that Schäuble "has ruled out Britain joining the single market if the country votes to leave the EU".

The Independent on the other hand has managed to combine distortion with embellishment, writing that Schäuble, "has ruled out Britain having access to the European single market in the event of Brexit, directly contradicting the reassurances of Boris Johnson and the Leave campaign".

This Johnsonian attachment to truth and accuracy simply points up once again the almost complete unreliability of the British legacy media, which can't even be trusted to report correctly on an interview of a foreign politician, even after it has been translated and handed on a plate to them.

What the interview does highlight, however, is the need for the post-referendum settlement to be part of the current debate. If we are saying right now that voters accept the possibility of remaining in the Single Market, then it cuts the ground from under the likes of Schäuble  who could no longer argue that a Brexit vote represents a desire to leave the EEA.

Hence the very welcome intervention of Denis Staunton who argues that there are: "Plenty of options for UK if Brexit proceeds", naming Flexcit as one.

Staunton also happens to mention my view of Mr Johnson  a "flatulent man-child". As one of the prominent figures in Vote Leave, this serial liar, currently touring the UK in his "blunder bus" emblazoned with another lie, is definitely not wanted on passage if he continues to speak out against our participation in the Single Market.

With eleven days to go, it is all the more vital that we get through to the British public that staying in the Single Market is an option. If that means ditching the flatulent Johnson and putting the feline Schäuble in his place, so be it.