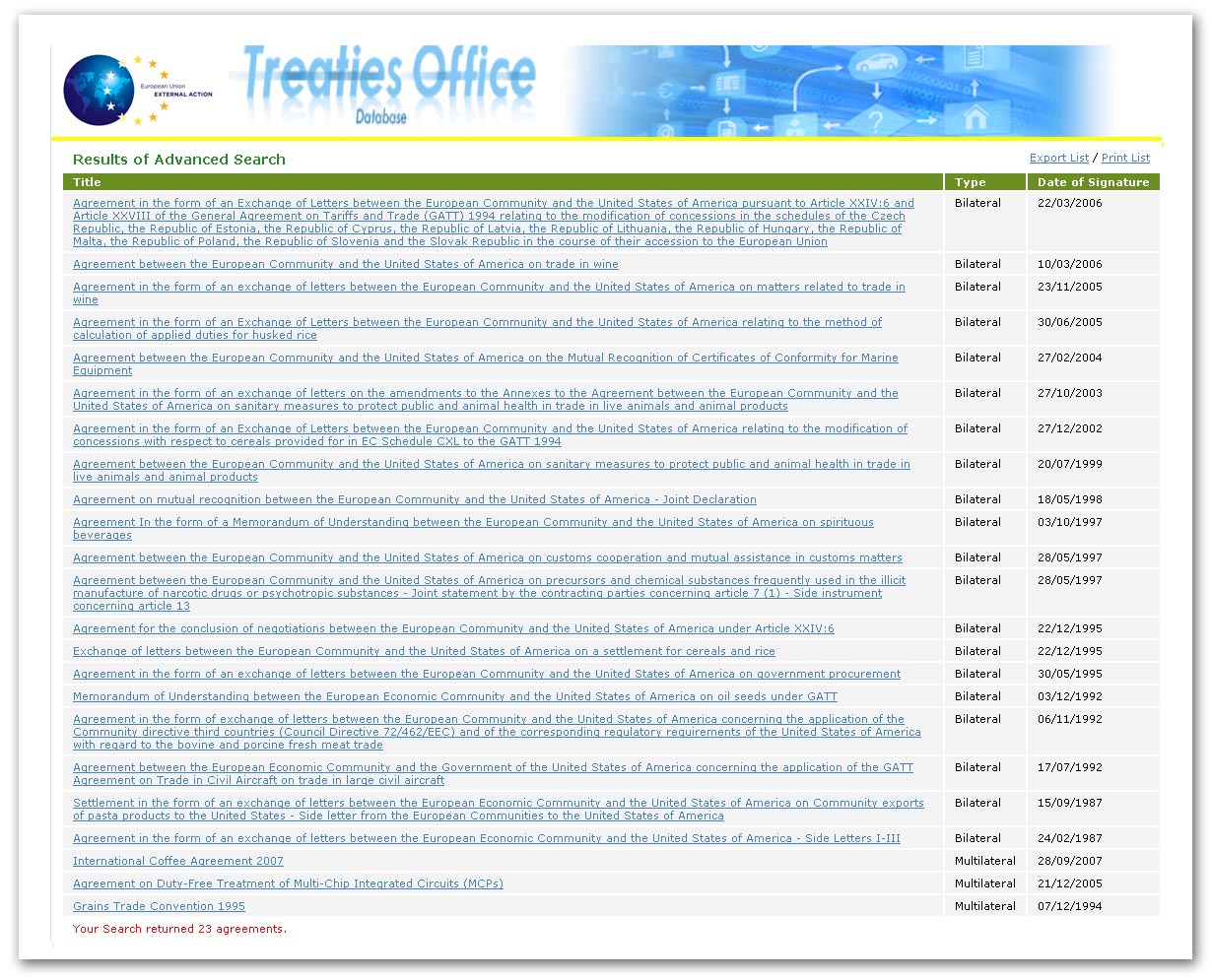 "The EU has never yet, in its history, had a trade deal with America", wrote Charles Moore in the Telegraph this weekend.

A more cautious person might, before writing such an unequivocal statement, have consulted the Europa website to check its veracity. And there is the Treaties Office Database which boasts an advanced search facility. If you search by "country" (United States of America) and "nature of agreement" (trade agreement), the database will list 23 agreements (screen grab above- click to enlarge).

If you do a new search, this time on the separate category of "Agreement for trade and cooperation", you will come up with a further eight agreements. In particular, you will find the 1976 Framework Agreement for commercial and economic cooperation between the European Communities and Canada.

This is described as a "non-preferential agreement" and was the very first formal agreement of its kind between the EEC and an industrialised third country, under which the parties committed "to develop and diversify their reciprocal commercial exchanges and to foster economic co-operation".

Now continue your search, this time under the category "Agreement on Customs Matters", an issue which is intimately trade-related, and you will find another four agreements. And there is also the vital "parallel agreement" concerning "the establishing of global technical regulations for wheeled vehicles, equipment and parts which can be fitted and/or be used on wheeled vehicles". This is the one brokered through UNECE WP.29.

Then we also see three agreements under the category "Agreement on internal market matters". These are the massively important WIPO Treaties (2) and the Trademark Law Treaty.

By my reckoning, that makes 38 EU-US "trade deals", of which at least 20 are bilateral. Others may get different results. The database at the time of writing was undergoing "enhancements and updates”, with a warning to expect "discrepancies in the site's behaviour". I will revisit the site when it is back fully functional.

If you are of a mind, however, you can visit the equivalent US sites which – to me, don't seem as well organised – where the relationships will be confirmed. One for instance notes, through the fog of misinformation, that the State Department claims "significant trade and investment relations" (below). 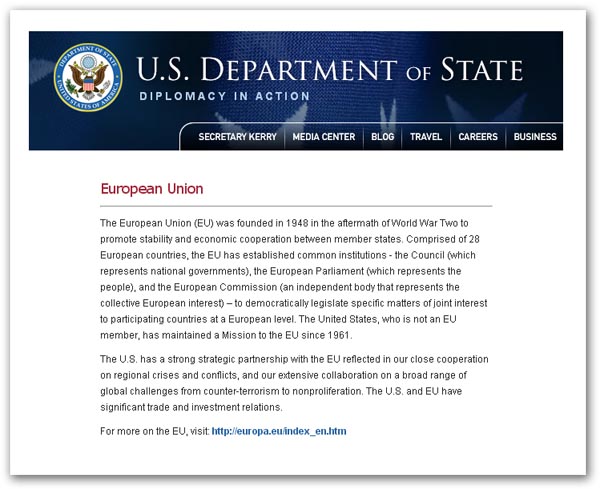 Then, just looking through the list of trade deals in for on 2013, one sees no less than 22 agreements on trade and commerce, including the 1996 Agreement "for the conclusion of negotiations between the European Community and the United States under Article XXIV:6, with annexes and exchanges of letters".

Currently, of great interest is the 2015 Cooperation Agreement between the United States Department of Commerce and The European Commission Directorate-General for Internal Market, Industry, Entrepreneurship and SMEs on Clusters, which goes alongside the Cooperation Arrangement on Small and Medium-Sized Enterprises.

All these data are more than adequate to demonstrate that Mr Moore's assertion about the EU not having a trade deal with America is not rooted in fact. The reality is that the two blocs are bound by an intricate network of bilateral and multilateral deals, all of which are administered jointly by The Transatlantic Council, described as the "primary plenary forum for economic dialogue between the United States and the European Union".

As a result of this, the transatlantic economy supports an estimated 15 million jobs. The EU and the United States are each other's leading partners by trade volume (imports plus exports). Every day, the EU and the US trade goods and services worth $2.7 billion. In 2012, bilateral trade in goods alone was worth $650 billion.

It thus ill-behoves the likes of Moore – and the many in the "leave" camp – to parade that myth that EU and the US, and British trade with America has effectively grown organically with "no trade deal". Simply to walk away from the EU without replicating the network of agreements with the US would cause significant perturbation to trade flows.

However, where multilateral agreements pertain, we are parties to them in our own name and can rely on continuity with little more than the formal diplomatic mechanism of an "exchange of letters". Similarly, with the agreement of the United States, we can rely on the presumption of continuity for the carry-over of bilateral deals.

What we should not do is adopt the head-in-the-sand attitude, fuelled by the profound level of ignorance that we are seeing – and pretend that trade with the US will continue unchanged after Brexit, unless we take active steps to make it happen.

But, from recognising that there are trade deals already in place also stems the longer-term solution to US-UK trade relations. The arrangement of most interest is the US participation in UNECE, especially in WP.29 on motor vehicle standards.

This covers not only vehicles themselves by their components and, in 2012 we saw a Global Technical Regulation (GTR) on passenger vehicle tyres. Harmonisation of standards on this single product was estimated to boost global trade by $40 billion, providing a mechanism for trade liberalisation that has eluded US-EU negotiators engaged in TTIP negotiations.

Although in 2014 the US abstained from the vote to adopt the standard, work is in progress to modify the standard to make it more US-friendly, thus demonstrating that UNECE is a realistic forum for ongoing trade negotiations.

Arguably, sector-specific – i.e., "unbundled" - agreements have far more chance of success than the "big bang" TTIP-style negotiations. Global agreement on just Regulation 0 has the potential to save billions, even though most people have never heard of it. And in that case, the UK – as a full member of UNECE – can be part of ongoing trade dialogue with the US, even (or especially) when it is outside the EU framework.

Being at the back of the queue – as Mr Obama would have it – when there is no bus scheduled is no different to any other position. No one is going anywhere. To be a full member of UNECE, with the possibility of expanding its role into other sectors, is far more promising. And that facility for expansion already exists through WP.6, in which the US takes an active part.

In short, therefore, we need to recognise that there is already a significant network of trade deals between the EU and the US. In that network also lies the answer to ongoing US-UK relations, which would make TTIP redundant and afford better chances of successful trade.

Thus, since Mr Obama's queue is going nowhere, we're better off making our own arrangements outside the EU.