EU Referendum: the limits to tolerance

2016-04-11 03:41:51
Of all the people in the world that the Marr Show could have picked to represent the leave campaign this week, the BBC chose Nigel Lawson, the geriatric former Conservative chancellor who nearly wrecked the British economy by shadowing Deutschmark without Thatcher's approval.

Not content with the economy, he is now set on wrecking the leave campaign, telling Andrew Marr that the Single Market is "not important". The EU's Common External Tariff, averaging out at 3-4 percent is "trivia", he grandly declares, and as a result is "not an issue".

The whole point about the tariff structure, though, is that different products attract different rates. Many are zero-rated but agricultural products carry a 32 percent penalty under certain circumstances, and many individual items carry even more.

The detail, to a wide range of economic enterprises, therefore, is very far from "trivial". Attacking (or neglecting) the Single Market is the Eurosceptic equivalent of invading Russia in winter. Collectively, enough interests would be damaged by Lawson's ideas to make a difference. They could make a serious dent in support for leaving the EU. Unsurprisingly, therefore, Stronger In thinks Christmas has come early.

For the "leave" campaign in general, this is a massively important own goal. Not at any price can we afford to put the Single Market at risk, especially – as we have always argued – the Government is relying on the status quo effect to carry the day.

Time and time and time again, we have argued that unless the "leave" campaign can provide reassurance that Brexit is both practicable and safe, we will not break the fear barrier.

Yet here we have Lawson handing the game to the Government on a platter, going out of his way to dismiss legitimate fears in that cavalier, offhand way that only Tory grandees seem to have perfected. But what sort of response does the "leave" campaign think it is going to evoke when voters have their fears dismissed as "not important" and "trivial"?

But then, this should have been expected this. We have in Lawson a man who completely messed up the IEA "Brexit competition" and who now thinks a trading relationship based on WTO rules would be "far from disaster". The man who didn't realise that the ERM was a precursor to the euro hasn't even begun to think about non-tariff barriers. 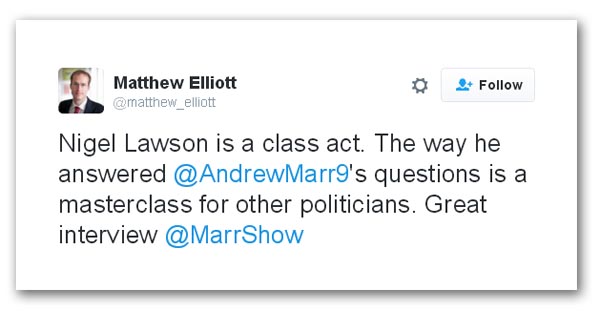 Bizarrely, though – even as Vote Leave spokesman declared that, "People need to be reassured that by voting to leave, their job is not being put at risk" - we had Matthew Elliott, CEO of Vote Leave, rush to twitter to gush like a teenager that Nigel Lawson was "a class act". Trilled Elliott: "The way he answered Andrew Marr's questions is a master class for other politicians. Great interview".

This is crass beyond crass – and especially so when the arrogant, malign fool that is Lawson had not even finished in his attempt to destroy the campaign. Asked about border controls in Ireland, the idiot told Marr that border checks would have to be resumed.

If there could possibly be a more sensitive subject, I would like to know what it is. In one fell swoop, Lawson has just wiped out the Northern Ireland "leave" vote. And what is especially galling on this is that I personally have spent several weeks researching this issue and crafting a sensible "line to take", culminating in this piece, with another yet to come.

Recently, Owen Paterson and others toured Nothern Ireland to re-assure the voters there that there would be no resumption of border controls, an activity that entirely reflected Vote Leave policy. Yet, here we have this man, in a matter of seconds, destroy hundreds of hours of work, setting back carefully crafted arguments and possibly wiping out the entire Northern Ireland vote. And Elliott applauds him.
Thus, while we see on this blog many comments from readers complaining about our criticisms of the "leave" campaign, here we have exactly an example of what I've been complaining about.

From a personal perspective, I simply cannot be expected to work hour after hour, week after week – as I have done for years – only to have my efforts destroyed in seconds by idiots such as Lawson, and stay mute.
That is the point which so many of my critics seem to miss. Some expect (and even demand) that I should confine myself to value-free technical analyses. I am not allowed to refer to the continued damage caused by the incompetence of the leave campaigns. Even though they at times seem intent on sabotage, I am supposed to say nothing.
There are even those who complain vociferously about my attacks on Alexander (aka Boris) Johnson – from those who seem to think that his popularity in a two-way fight with David Cameron would make up for his incompetence and the minor fact that he – by his own admission – is not a "leaver".

And only this weekend to we see reports in the Guardian and the Mail that Johnson might be offered a Cabinet post after the referendum. Yet some readers still want me to refrain from criticising a serial liar who can be no more trusted than fly.

That is not going to happen. Had the media not been so obsessed with Mr Cameron's tax affairs, this Sunday could well have marked the day when we lost the referendum. It was always going to be difficult to win, and Lawson (once again) has made it that bit harder.

We, of course, exist to pick up the pieces and it would be a breach of faith to all our readers and donors to give up, as long as there remains the possibility that we can win. If we don't keep trying, that miracle cannot happen. Thus, the meeting on 23 April will go ahead and we'll continue campaigning with a vengeance.

But there are limits to tolerance. I am not going to ignore the "leave" campaign's attempts to sabotage the entire referendum. It is necessary and entirely justified to deal with the enemies in our midst, as well as those without. In many ways, the enemies within are more dangerous.

I will do my best to change minds about the direction of the campaign. Should I fail, I'll be there for the reckoning afterwards. We are not going to sit idly by while people's dreams are destroyed by the crass individuals running the campaigns.

As one of my readers so rightly says, right now if you're not angry you're either asleep or a sheep. Be assured, I will not be alone in my anger.