David Cameron coming back from Brussels with empty hands should have destroyed the case for remaining in the EU. Yet, according to YouGove, the "deal" is gaining a certain amount of traction – much more than it should do, given how fundamentally dishonest it is.

Thus says the polling company, as David Cameron closed the deal on 19 February, the race was nearly neck and neck: "leave" had 38 percent of the vote and "remain" had 37 percent.

In the ten days since then YouGov has been conducting regular polls to gauge the relative success of the campaigns in their infancy. "Remain" has had four consecutive leads, averaging 40 percent since 25 February, while "leave" has averaged 37 percent. 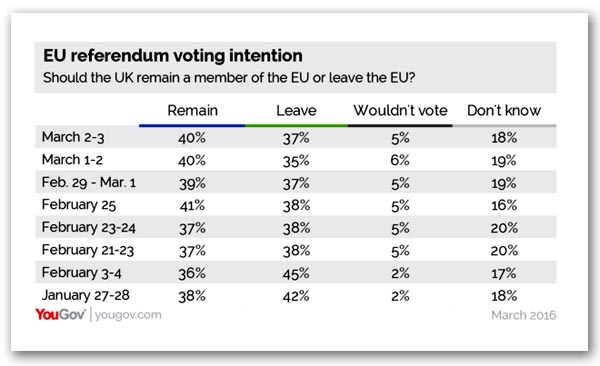 The movement, we are told, has not obviously come from any one demographic group. Furthermore, there is no sign as yet that undecideds are beginning to make up their minds. But "don't knows" are more or less constant, accounting for 18 percent on average.

This is extremely dangerous. Not only should Mr Cameron have taken a hit, a "dodgy deal", recognised as such should have given the leavers a significant boost. Clearly, we haven't done as much damage as we should have done. And while Mr Cameron hasn't achieved a runaway victory, he's not only still in the game, he's edging ahead. If we had discredited the deal, the "remains" would be behind.

In my view, therefore, we need to be redoubling our efforts to lodge the emptiness of Dave's deal. If it gets accepted as a done deal, he will have got away with his "special status" myth and will be free to define his own agenda.

That leaves us with our "open DOR" agenda: Debunk the deal; Offer an alternative; and Reassure voters that it's achievable and safe. If we can’t even handle this first hurdle, then Mr YouGov is going to have even less good news for us the next time he reports.