EU Referendum: there are no negotiations 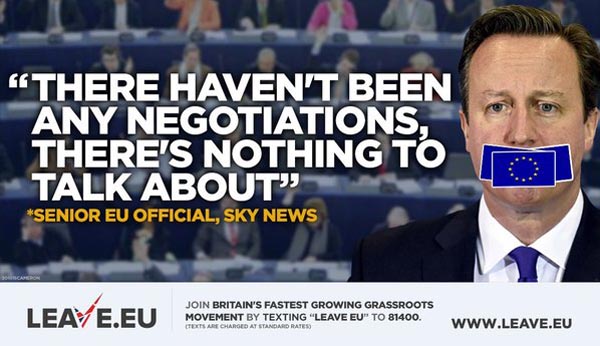 This cannot be repeated enough times: there are no negotiations. Mr Cameron is perpetrating a charade, an outrageous pretence, going through the motions in order to convince a gullible media and an unknowing electorate that he is striving to deliver a new relationship with the EU.

This has been obvious for well over a year, and increasingly so as time has passed. And now we have confirmation from a "a senior source in Berlin", who said of the European Council meeting last week, that there was nothing to talk about since, he said, "there haven't been any negotiations".

The reasons why there haven't been any negotiations are three-fold. Firstly, some (but not all) of the headline changes Mr Cameron wants will require treaty change, and the "colleagues" are not disposed to open up treaty talks just for the benefit of a British prime minister.

Secondly, there is nothing to negotiate about, since the "colleagues" are not interested in the ideas Mr Cameron has put forward. They are not even prepared to discuss them. To have a negotiation, people must be sitting on both sides of the table  it takes two to tango. There are no "colleagues" at the table.

Thirdly, and most importantly, there is no need for negotiations. The outcome of what has now become a charade (not that it was ever much different) has already been decided. The result is pre-ordained.

What this amounts to is that the "colleagues" are prepared to agree a special status for the UK. This they are provisionally calling "associate membership", but it may acquire another label. Mr Cameron will go through the pretence of demanding this, and the "colleagues" will pretend to agree to his "demands", which will be locked into a new treaty, with the process to start in 2018.

Mr Cameron will then come back from Brussels, waving his "piece of paper", but then to reassure the doubters, he will promise another referendum on the outcome of the new treaty.

He will thus ask the people to trust him in this referendum, which will be treated as giving a (Conservative) government a mandate to negotiated the finer details of this "new relationship", which may include the promise of reduced contributions, repatriation of powers and many of the other goodies he has already promised.

On this basis, the coming referendum is not going to be about the EU. When it comes to airing the downside of EU membership, we will find Mr Cameron agreeing with us. He will "share our pain", and claim that his shiny new "relationship" will cure all our evils.

This, of course, makes all the current opinion polls valueless. They are asking the wrong question, of a scenario that won't even exist by the time we go to the polls. And what we do know of voter behaviour tells us that an ostensibly credible outcome to Mr Cameron's "negotiations" is worth 20-30 points in the poll, giving the "remains" a clear victory.

The game is on, therefore, to keep up the pretence that there are ongoing negotiations, with the Prime Minister  aided and abetted by the "colleagues"  perpetrating an ever-more elaborate charade, all intended to give the impression of a plucky Prime Minister courageously extracting concessions from a grudging European Union.

The timing will be fine-tuned, to engineer a triumphant return from Brussels at the very last minute, snatching a victory from the jaws of defeat, calculated to inspire a grateful and admiring population to rush to the polls and tick their "remain" boxes.

Perpetrating the charade, we have the Europhiles such as the Centre for European Reform and the likes of Open Europe laboriously pontificating on the faux negotiations. Likely as not, we can also expect the gullible media to fall for it, hook, line and sinker.

For the rest of us, the task is to expose this charade for what it is. The "associate membership" is a second-class option  the worst of all possible worlds, which keeps us locked in embrace of a supranational entity, unable to take our proper place in world affairs.

And, unlike 1975, we have this internet "thingy" to spread our message. When it comes down to it, Mr Cameron has a very weak hand, and will be relying on deception, timing and showmanship to make his case. We can beat this, and if we don't, it'll be our own damn fault.