EU Referendum: a parade of ignorance 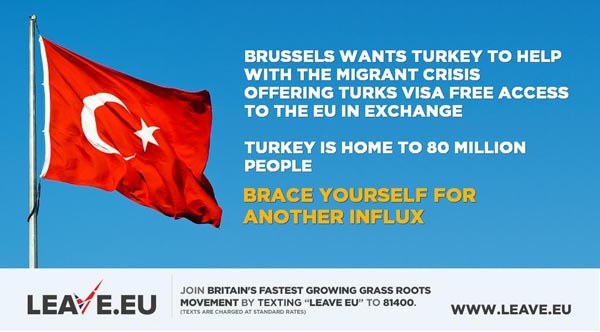 Ten days ago, I was writing about the EU's draft action plan on migration and the continued negotiations with Turkey on the "EU-Turkey readmission agreement".

On the whole, this action is both benign and necessary, if we are going to get a handle on the Middle East migration crisis. Without the active involvement of Turkey, which currently houses over two million refugees, there is going to be no long-term resolution to the crisis.

In return for relatively modest cash payments (detailed in my previous post), and carefully controlled visa liberalisation, Turkey is to agree to take back irregular migrants from Europe, who have come to region via Turkish territory.

The EU (and EFTA states) stand to be considerable beneficiaries of this programme, which is by no means generous. It has provoked a less than enthusiastic response from the Ankara government, which feels that its contribution to holding back the flow of refugees has been overlooked.

However, the plan has now been endorsed by the European Council and, in the Council conclusions, from this week's meeting, there is also reference to the need to "re-energize" the accession process, something of a ritual that is unlikely to go anywhere – other than an offer, in due course, of associate membership.

Predictably, this has evoked a terse response from Turkey's president, Recep Tayyip Erdogan, who has dismissed talk of EU membership as "insincere" – which indeed it is. Erdogan is caustic about EU Member State efforts. "They announce they’ll take in 30,000 to 40,000 refugees and then they are nominated for the Nobel for that", ha says. "We are hosting two and a half million refugees but nobody cares".

This gets closer to the reality. The Independent takes the view that, "in the absence of a serious commitment to staunch the migrant flow, the draft agreement with Turkey is simply more Euro moonshine, wishful thinking on both sides, offering Ankara concessions Europe has no wish to make in return for actions Turkey has no intention of taking".

Nevertheless, despite the tentative nature of the EU's proposals in what is a "draft" plan, and the lack of any settled detail or commitment to it, some "leavers" (illustrated top) are leaping prematurely into the breach, to spread their own brand of ignorance. In so doing, they have completely misread the situation.

"Informed" by Nigel Farage, we are supposed to believe this deal "borders on insanity". Yet, if it works (and it is a long way from that), it is the shortest and best route to the outcome Mr Farage himself wants. No one with the slightest understanding of events is under any illusion that little is going to be resolved without the active participation of Turkey.

But such is Farage's quite astounding ignorance that, despite this stemming from an initiative in 2002, initialled in 2012 and signed in 2013, the Ukip leader believes this has come "quite out of the blue, without any rumours or warning".

When the "leave" campaign is plagued with this level of ignorance, it is time to be seriously alarmed. No campaign so seriously lacking in its knowledge base can ever be successful. We cannot continue in this way - it is embarrassing even to be associated with such malign amateurism.