EU Referendum: when "no" means "yes" 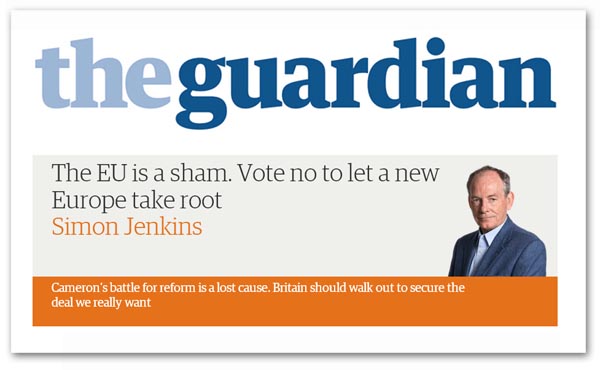 Daniel Hannan is the "brilliant" analyst who was convinced, not so long ago, that Greece would drop out of the euro. This man was also quite happy to run with the idea of an early referendum and, in May 2015 was welcoming the idea of "associate membership". His complaint was that Mr Cameron wasn't asking for it.

Now, he joins the ranks of other geniuses like Tim Montgomerie in being convinced that "no serious analyst" thinks Mr Cameron's recent list of negotiation demands "amount to anything".

Hannan believes that David Cameron is deliberately lowering expectations "so that even the paltriest change can be sold as an unexpected triumph". For this, he relies on the "unintentional leak" from Andrew Lansley, who predicted "a bogus row with France after the February summit".

It remains to be seen, says Hannan, whether there will be a sham fight, but this "ludicrous downplaying of expectations" is already taking place. He then guesses that the "meagre expectations" will be exceeded by going ahead with fiscal and political integration, with non-participating countries afforded a different status which "they might even try to get away with calling it associate membership".

What the "brilliant" Hannan doesn't seem to have realised, however, is that Cameron's "four key demands" fit neatly with the building of a launch platform which will take us towards this "associate membership". In that context, far from failing to "amount to anything", they are a vital piece of evidence in establishing a direction of travel.

Thus, Hannan ends up making the mistake of thinking that associate membership is not on the table. However, if it was, he suggests that "most Eurosceptics would settle for such an option". This would amount to "a broad European market, covering EFTA states and Turkey as well as EU members, within which the Eurozone countries could establish a political as well as a monetary union".

But then, tucked into this cosy little script is the "money quote". Given that Hannan's idea of "associate membership" becomes available (or some unspecified variation of it), he then argues, "Brexit will become unnecessary". Hence, one assumes that if Mr Cameron does offer it at the eleventh hour, Hannan and the rest of the soft Tory "eurosceptics" (including the "Vote ElliottŁ group) will support the "remain" option.

It seems hardly a coincidence, therefore, that James Kirkup should be writing in similar terms. He thinks Mr Cameron may be voting to end "Britain's 'current' EU membership". When a majority of voters agrees with him, "he will start negotiations not on exit but on a 'new' membership deal, which would be put to the people, eventually".

That new deal might look quite familiar, writes Kirkup. It will be "free trade in exchange for free movement of EU nationals, access to EU capital markets in exchange for EU financial regulation, and permanent exclusion from ever-closer union and the euro".

This is effectively the substance of Mr Cameron's "four demands". In Kirkup's scenario, though, we'd cease to be a "member" of the EU and become a "partner" or some such. Tellingly, he doesn't use the words "associate membership", but that's what he means.

On that basis, Kirkup sees the coming referendum as a choice not between in and out, but as between "in" and "half-in". We see this as the makings of a fudge that will blur the battle lines and confuse the voters, matching Hannan's equivocation.

Adding further to this confusion is Simon Jenkins writing in the Guardian. He decides that, when seen from Britain, "the EU has become a sham" (illustrated top). Thus, he declares, "Some version of a new single market must be found", adding that no such search will even begin if Britain votes to stay in the EU. "Only a vote to leave offers negotiators the leverage they now so clearly lack".

Nevertheless, anyone who thinks Jenkins has become a leaver should think again. The man would not have us leaving absolutely. Rather, he wants a "new relationship between the nations of Europe and their supranational governors".

What then Jenkins would have the government do is go to Brussels and then negotiate a new treaty "that meets, to some degree, Cameron's original negotiating demands". There then comes another referendum – to agree this new treaty. And by this means, a British vote to leave become "the precondition for a new Europe" - or which we are part.

If we now gather together these disparate threads, it is not clarity that emerges, but glorious obscurity. The water is being muddied. What was once a simple matter of "in" or "out", "remain" or "leave" now becomes a turgid mess of options.

The scene is being set for the "white knight" to emerge. Mr Cameron can leap into the breach and offer clarity, in the form of his version of associate membership. This he will promise in the forthcoming treaty process – after which we get our second referendum on the new treaty.

The confusion, meanwhile, is deliberate. As long as there is no clarity, there will be no clear choice for the voters and the siren voices of the status quo will reassert themselves. Cameron comes shining through the mist, a beacon of light and sanity, in a dark and turbulent world. Mixing metaphors outrageously, he attracts swing voters like moths to a flame and wins the game.

That is how this dirty battle is being fought, and this is how we could end up losing – not in straight fight but out-thought, out-manoeuvred and betrayed.