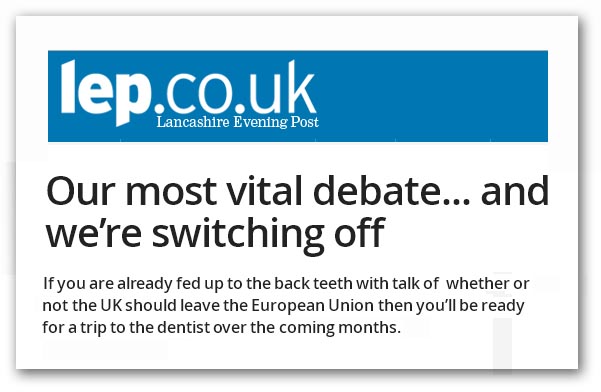 One is tempted to be a little more acerbic than usual in describing the activities of the two high-profile "leave" campaigns.

Both, in their own ways, but for different reasons and with different motives, are doing precisely the wrong things Ė a monumental waste of time and effort, detracting from rather than strengthening our position in what is increasingly certain to be a long campaign.

The latest nail in the coffin of an early referendum is reported in the Guardian, from where we learn that the European Council scheduled for today will not even discuss the UK referendum.

The "British question" has now been relegated to a one-sentence and final item on the draft communiquť, after senior officials who had been meeting to prepare the agenda said their British counterparts did not appear to have a mandate for negotiations.

That we are now into a long campaign, however, has evidently caught the "leave" campaigns by surprise. Both have misread the signs and have launched high intensity activities in the expectation of an early poll.

Predictably, we are now seeing a backlash. And a taste of what is likely to be a widening response comes in the Lancashire Evening Post. It remarks that, "if you are already fed up to the back teeth with talk of whether or not the UK should leave the European Union, then youíll be ready for a trip to the dentist over the coming months".

Bizarrely, the LEP doesn't seem to name its columnist, but he says that, "maybe once we have a date, I will feel differently, but it is hard to get excited when the arguments for and against don't seem to change".

And there, in one sentence, are two key points. Firstly, the public is not really going to engage with this campaign until Mr Cameron names the day. Secondly, we have the observation that the arguments "don't seem to change".

This is a point that leads to the conclusion that, with a deadline of 2017 for the referendum, the campaigns could run for another 26 months. This, observes our columnist, "could be a disaster for what is one of the most important decisions this nation of ours has had to make". "Be prepared", he says, "to be bored to death".

This should hardly come as a surprise. In July this year we were drawing attention to debates in 1968 that would not look out of place if they were held today on virtually identical terms, so little had the basic arguments changed. As I observed then: "We can do them all over again, spreading tedium throughout the land, or we can win the referendum. But it is unlikely that we can do both".

We get the clearest of confirmation of this from the Scotsman, the leader declaring: "We need proper EU debate not slanging match". "Slanging matches between the different sides", it says, "will illuminate nothing", arguing for the respective campaigns "to deal in facts, grown-up arguments and strong opinions from a range of people, not just the same old tired faces".

Nevertheless, the players indulge themselves and so the tedium plays out. Two well-funded "leave" campaigns are churning out the same dire, boring repetitive propaganda - self-indulgent, fratricidal nonsense that is of absolutely no value to the campaign as a whole.

Without strategic input, the only output is white noise, indicative of the inability of our side to focus on what it takes to win this fight. That we have the BSE "mad cow" unit as a patsy is neither here nor there. It is merely a distraction, drawing attention away from the real enemy, David Cameron.

Within the eurosceptic "community", though, there is that self-destructive tendency to "do something", irrespective of the strategic or even tactical gain, expending huge effort, just for the sake of expending huge effort. Not a nanosecond is given to the effect the activity might have.

Still, after all these years, there is this confusion between activity and output Ė this firm belief that it is better to do something than nothing. Any activity, as long as it is activity, is good.

But, most often, this is based on an incredibly narrow perspective of what counts as activity. We have long argued that intelligence gathering, analysis, training, strategic planning and many other activities are essential elements of an effective campaign, but the self-indulgent prattle continues.

Sometimes, it seems to me, there is an absolute determination to lose this referendum. Self-important, witless fools are promoting this stuff, wasting good money on activity that is worse than useless Ė activity that is totally counter-productive, which actually detracts from our efforts Ė and we are even supposed to applaud them.

All this reminds me the famous medical dictum that, "if one cannot do well, then one should at least do no harm". Referendum campaigners could do well to pay special attention to these wise words. Otherwise, the public truly will be "bored to death" and all our work will have been in vain.