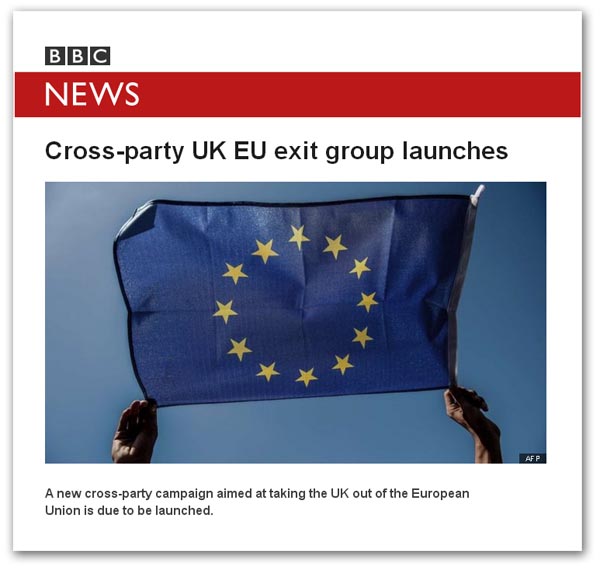 A new campaign group has broken cover, under the title "Vote to leave". Although the website calls for volunteers and applicants for paid positions to "join us", it is remarkably coy as to who "us" actually is.

While it is long on prestigious figures (always a bad sign), there are no details of the operational team – those who will be in charge of the day-to-day conduct of the campaign. For that, one has to go to the legacy media (and Breitbart), where one learns that the chief executive is Matthew Elliott and the campaign director the much over-rated Dominic Cummings.

In the build-up of this organisation, I have had several face-to-face meeting with Mr Cummings, and multiple contacts, and have delivered several detailed briefings – some of which have quite evidently taken root.

Throughout this period, it was understood that I would assist the organisation once it had launched, even though I have made it abundantly clear that there are no circumstances under which I will work for or with an organisation which had Mr Elliott as its chief executive. I do not trust him and have no confidence in his ability to run an effective campaign.

The response to this has been continued assurances from Mr Cummings that the head the organisation will not be Mr Elliott, on which understanding, I have been giving it my full support. Yet, as events turn out, this is not true and never was true. It has always been the case that Mr Elliott would take control. To that effect, Elliott and Cummings formed their own company, "Vote Leave Limited" on 18 September, with themselves as sole directors. The "Vote Leave" campaign is their private property.

However, there has been another issue relating to my association with this organisation. It seems that I am not allowed to criticise  the current Elliott operations, or express criticism of any of his supporters, such as Daniel Hannan. The writ is extensive, restraining me from offering critiques in any form, actual or implied - even when no names are mentioned. I am even required to censor my son, Peter, and ensure that he refrains from hostile comment.

Failure to comply has brought multiple and continued complaints, but not to me directly. That is not their style. Instead, the complaints are made to my sponsor, who has been under increasing pressure to cease funding me. It was made clear to me that unless I fully conform with unspecified conditions of censorship, and absent myself from a debate on strategy in which Cummings and others feel free to take an unrestrained part, my funding would be terminated.

Such has been the pressure that I have even had complaints about pieces I hadn't written, on blogs I do not control. Recently, faced with still more complaints, I decided to tell my sponsor to stop funding me, so that his support can no longer be used as leverage. This removes the restraints and allows me to return to writing freely on this blog and elsewhere.

Given these events, it should come as no surprise that my enthusiasm for Mr Elliott's enterprise is somewhat muted, and that I maintain my current stance of refusing to work with it. Nevertheless, insofar as it may contribute positively to the campaign, one should wish it well, even if the early signs are not promising. The launch video is - in my view - crass, and the emphasis on money-saving dangerously misplaced.

The lack of wisdom in such an approach is readily evident from this report, where the personality-obsessed Laura Kuenssberg, BBC political editor, tells us that "the arguments over whether we really gain or lose economically will be a central strand of the referendum debate".

What Kuenssberg thinks important signifies exactly the opposite. The very last thing we want is a campaign bogged down in "arguments over whether we really gain or lose economically" from leaving the EU. Yet this is exactly where Elliott and his idiot friends are taking us, with the all the strategic savvy of demented slugs.

Thank goodness, is all I can say, that it will be two years before we see a poll – enough time for these wunderkind to exhaust themselves and drive their supporters into tedium-induced comas, leaving the field for those with something interesting and relevant to say.

In the meantime, as befits a blog bearing the title EUReferendum.com, we will comment on the conduct of Mr Elliott's campaign as we see fit – reporting the good and the bad, as we do with other players. Freed from the insidious blackmail that has been going on behind the scenes, we will continue to stand by our view that, to succeed, we must be our own sternest critics.