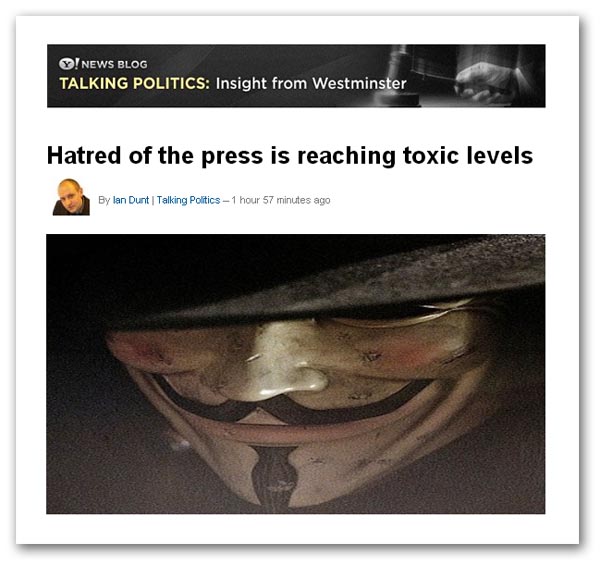 After physical attacks on journalists by protesters at the Conservative Party Conference, Ian Dunt, who calls himself a political journalist, writes for the Yahoo News blog in defence of the media. However, he does concede that people's anger about the press is not completely misguided. "Political journalism", he says, "is often a trivial failure".

The journalists "are far too often interested in tittle-tattle about leaders than they are the consequences of their policies", Dunt adds, also telling us that they also engage in political compromises of their own, in which they give average ministers good write-ups in expectation of stories in return.

But Dunt does not confine his criticisms to the media. "Those warped incentives", he says, "do not just lie with journalists, but with readers. The brutal truth is that stories about policy failure – the effect of welfare cuts, the reality of life in prison, the hardship faced by asylum seekers – does not get anything like the attention of a piece about the latest ministerial faux-pas or whether it's still OK to say 'first world problems'".

"The web", he reminds us, "offers editors unparalleled information about what people choose to read. If they read more investigative journalism – the kind which takes time and money – more of it would be written".
And there, whether you like it or not, the man has a point. Editors read the runes: if it's read, they publish more of the same, and if it doesn't sell, material like it rarely gets a showing.

Perhaps an example of this comes with yesterday's flood of fringe events devoted to the EU at the Conservative Party Conference. One struggles to find any detailed reports of proceedings, while the Telegraph gives space (quite a lot of it) to Anna Soubry, minister for small business, telling eurosceptics to "get a life".

Whatever else, this is certainly an example of the trivialisation of political journalism, and yet another example of why the media is totally untrustworthy. And that is before even it ceases to pretend euroscepticism, changes sides and supports Mr Cameron's negotiation package when he reveals it to an expectant nation.

Discussing this problem with several people yesterday, in a day which seems to have been spent mainly on the 'phone, all are concerned that, as a result of this, a successful referendum campaign is going to have to bypass the media and deliver its message to the people unaided.

The obvious answer here is to use the internet. Some 92 percent of all households in the UK have internet access, so this provides a cheap and effective means of reaching large numbers of people, very quickly.

However, there is also an obvious limitation in the use of the medium, in that we are seeking to do more than simply convey information. We want to change minds and thereby get people to vote in our favour in the referendum.

But if communicating information was sufficient to achieve this, Ukip would be in government. It is a mistake to believe that putting facts in front of people is sufficient to change their behaviour. Even targeting specific people, with messages tuned to their particular circumstances and expectations, is not enough. And this is why the wizz-kid data miners and processors are going to fail.

This is because the crucial element needed in the mix is prestige – about which we have written a great deal on this blog, over term. People judge the importance and veracity of the information they receive not by its accuracy or the quality and attractiveness of its presentation, but by the prestige of its source.

In this referendum campaign, our main protagonist – as we keep stating – is not going to be the "remain" campaign, with its tawdry cast of nonentities. It is going to be the Prime Minister. And in this conformist, obedient society of ours, holding this office confers a great deal of prestige – a huge hurdle for us to overcome.

As the great guru Lynton Crosby tells the Times today, "Voters will be heavily guided by David Cameron. If he comes back from the negotiations in Europe and tells voters he has achieved a certain outcome that people should support I think that will be highly influential".

Favouring us though is the fact that prestige exerts itself in different ways. High-prestige characters (like the Prime Minister) can influence people from a considerable distance. But those with low prestige, such as friends, relatives and workmates, can also exert influence. However, it tends to have most effect at shorter range, and usually works between small groups.

Between distance and height, though, there is a cross-over. At very close range, a low-prestige person can over-ride a more distant high prestige messenger (distant in time or place, or both). Thus, the closer we get to our recipients, the greater effect we can exert.

To do that, rather than employing the top-down, direct marketing techniques (whether physical or electronic), we are using what we call the cascade system, to get the message closer to the recipient before it is delivered.

The crucial element is this is the network of blogs we are building, each of which will carry the key messages through the campaign – and especially the response to anything the Prime Minister might communicate.

But the blog is much more than just a medium of communication. Through the comments sections and with the active participation of their authors, the aim is to build communities, with whom there should be a relationship of trust. The blog then becomes the lynch-pin of the community.

The next stage is for the readers themselves to form their own communities – through Twitter, Facebook, forums or YouTube, and through more conventional means, passing the messages onwards. That next layer then forms communities, and so on and so on.

In getting the message over, Crosby places great value on Facebook - but thinks Twitter is of little importance because it had little impact on ordinary voters. "Britain has the highest proportion of people on Facebook. We have targeted voters in marginal seats on Facebook", he says "Twitter is a different thing ... [it] does not influence ordinary voters. It's just the voice of the angry".

He's actually wrong, because he's in the top-down communications game. We see Twitter as an activists' tool, permitting "horizontal" communication, and a means by which we can all keep in touch.
And as a theoretical illustration of the potential power of the cascade process, we could assume a network of a 100 blogs, with an average readership of 1,000 (this blog already has 20,000, so we have a head start). That gives a potential "reach" of 100,000. And if each reader has 1,000 followers through Twitter, Facebook and various other means, that brings our total reach to 100 million – more than the entire population of the UK.
Of course things don't work that way, but smaller numbers and a larger number of layers can still reach huge numbers of people. What we need is the system in place, the focus and message discipline.

The beauty of the system though is that it starts with a mere hundred blogs. Archimedes once said, "Give me a fulcrum, and I shall move the world". In this campaign, give us 100 good bloggers, leading their own communities, and we will win the referendum. We've already made a good start.