EU Referendum: agreement on a plan 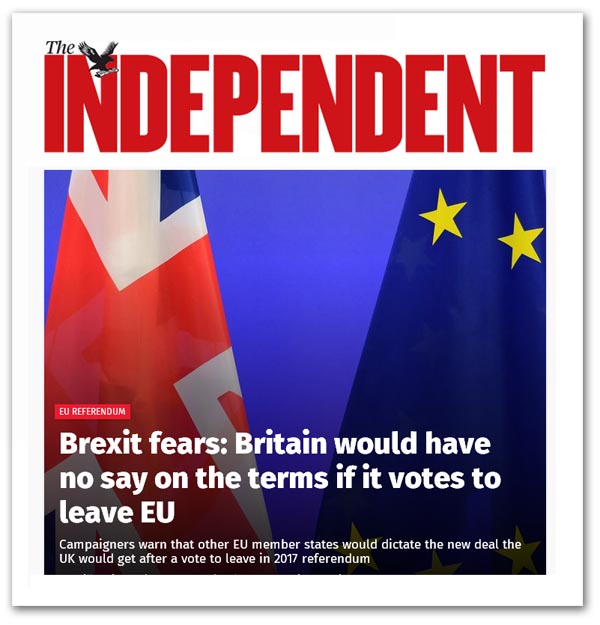 The extraordinarily simplistic article in the Independent on Sunday on leaving the EU doesn't really matter. It's in a newspaper that's dying on its feet, has very little credibility and speaks mainly to its own kind – fanatical Europhiles wedded to the cause.

In typical style of its kind of propaganda, it raises the FUD – telling us that "Fears grow that European Union will impose tough conditions on UK after 'Brexit'" – total hyperbole, then adding the formulaic and completely unsubstantiated assertion that: "The threat will fuel further tensions within the Conservative Party, which is divided on the EU".

This is such empty invention that it scarce deserves a reply, but it is interesting to observe the techniques used. Having raised the scare, the paper then brings on the straw men in legions, claiming:

Eurosceptics have argued that the UK would still enjoy favourable trading terms with the EU even if it left, often citing Norway, which is not a member but is still the fifth biggest exporter to the bloc. Lord Lawson, the new head of a Conservative Brexit campaign, said last week Britain could "negotiate a free trade deal with the rest of Europe", entailing "a more amicable and realistic relationship".

But this is more than just straw men – it is bias by omission. With just short of 30,000 downloads behind it and a short version in preparation, Flexcit is by any measure a significant contributor to the debate, offering a structured and complete demolition to the Independent fluff.

Not least, Flexcit sets out a six-stage exit plan, with multiple fall-back positions, sufficient to protect UK interests against any known contingency. It easily answers the "fears" that the likes of the Independent raise.

But the paper ignores Flexcit, as do most Europhile organs, inventing any number of excuses for doing so, when challenged. But they all amount to the same thing. They dare not acknowledge it because it so comprehensively demolishes their superficial and facile arguments.

But they are considerably assisted in their task by being able to rely on the indifference of a diminishing tranche the eurosceptic community, who either have their own axes to grind, or labour under the mistaken impression that an exit plan isn't necessary. Some even argue that any single plan is so divisive that we must do without one.

On the other hand, it was the brilliant Second Cummings who argued (behind the scenes) that that Flexcit, with its six-stage structure, was too complex for the tender flowers of Westminster, prompting this response and the observation that:

If you want to qualify to the highest level in music, through the examination board of the Royal Schools of Music, there are EIGHT stages. Yet, to undo 40 years of economic and political integration, some people think SIX stages are excessive.

Amusingly, I noted on my Twitter feed today the post illustrated below, promoting the "14 easy steps" needed to become a runner. And there I thought it was about putting one foot in front of another, quicker than normal. 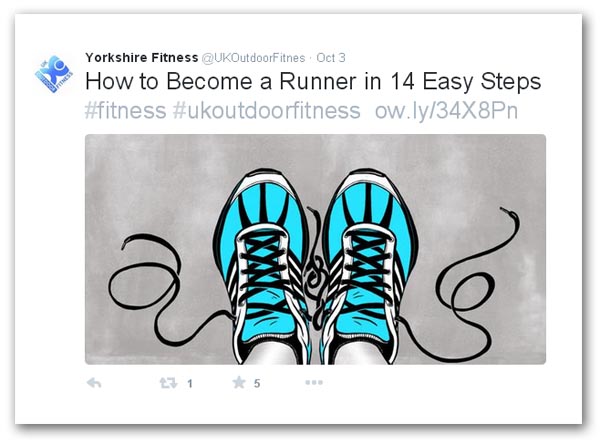 But as long as the eurosceptic aristocracy are determined to ignore Flexcit, that gives the europhiles a free pass to do the same thing. In this case, the IoS relies on the fatuous Lawson – who really should know better having stitched up the IEA Brexit competition – who is bleating that Britain could "negotiate a free trade deal with the rest of Europe".

If this doddering fool stopped to think for one moment, he would know that it could take years to come to an agreement – far more time than is politically acceptable – opening the way for the Independent in a separate piece to claim that this would be "a long and tortuous process that would take many years and create long-term uncertainty".

When, years down the line, we still have spokesman for the "leave" campaign being caught out on the basics, it is time for all of us to ask whether we can afford to have these people representing us, or whether they should be put out to grass. Clearly, Lawson has learned nothing at all from judging the IEA competition.

However, while we can afford to ignore the Independent - for the time being – its input gives us an inkling of how the Europhiles are going to play it. Picking on the lack of an agreed exit plan is easy meat for them, and they will continue to exploit this lack of agreement for as long as it gives results.

For over ten years, I and others have been arguing that the anti-EU movement must get behind an exit plan and, after all these years, we are not much further forward in gaining broad-spectrum agreement.

Flexcit, of course, remains on the table, as does the offer of looking at any amendments that might be submitted – the work already having accommodated the thinking and arguments of many readers (with a corrected and improves version out shortly).

Most of the detractors, however, far from seeking to make the work better, seem not even to have read it, while the Elliott faction went into competition, with an error-strewn, incoherent door stopper that has all but disappeared with trace, unread even by the friends of Elliott.

The only thing different between now and ten years ago is that we currently have a plan in place. But until enough people put their weight behind it, and force its adoption, the way will be open for the likes of the Independent to pretend we are without one, and make mischief for us.

There is no use waiting for the great and the good to get off their pedestals on this. We the people have to take our own decisions and make the running – unless, of course, you are content to have the mighty Lawson blather on your behalf.