EU Referendum: a question of genocide 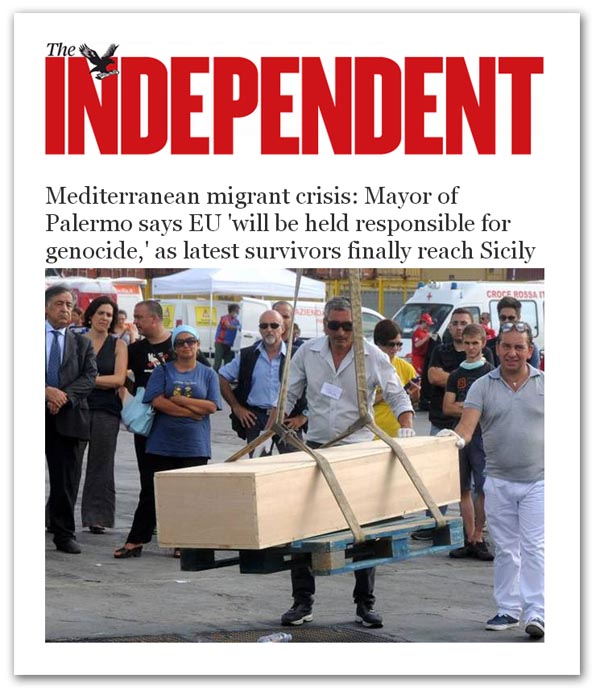 As bodies are shipped ashore from the latest drownings in the Mediterranean, we see an intervention by Leoluca Orlando, Mayor of Palermo. As reported by the Independent, by the Telegraph and others, he has watched thousands of migrants arrive in his city in the last year and fears that this will not be the last disaster he witnesses.

Unsurprisingly, he puts the blame for the tragedy and all others in the Mediterranean squarely on the shoulders of the European governments failing to provide safe passage for the people fleeing war and persecution to reach their shores.

"In the future", he says, "the European Union will be held responsible for this genocide, exactly like we held Nazi fascism responsible for genocide 70 years ago", speaking while the undertakers prepared to remove bodies from the ship bringing the latest bodies back from the sea.

"The problem", he adds, "is not just for British people. It's not possible to stop human mobility in the world and if you try to stop it with violence, we are responsible for genocide. Each form of prohibition produces violence and organised crime".

And in Orlandovs book, we do not escape responsibility. "I think Britain is as responsible as other European countries for this genocide and when history records it, I wish to be able to say I was not complicit".

The worst of this, of course, is that – hyperbole apart – the man has a point. Over a year ago, I was writing of a policy failure at all levels. We followed up with a Booker report saying much the same thing and then, more recently in my piece on fences, I explained part of the reasons why.

We need to get this straight. The people coming to us, in the main, are seeking international protection under the 1951 UN Convention on the treatment of refugees, and the 1967 Protocol which extended the Convention beyond Europe.

We and all the countries in the EU are parties to the Convention and Protocol, by which we effectively offer all those who reach our shores demanding protection an unequivocal guarantee that their cases will be considered and that we will not deport them or otherwise transfer them to another country.

Contrary to the ill-informed assertions of many pundits, there is no "first safe country" requirement in the Convention or Protocol. The text is here and anyone can do an internal search to confirm it for themselves. They will not find the word "safe" anywhere. The assertion that, under international law, asylum seekers are obliged to seek protection in the first "safe country" they reach is a myth. There is no such requirement under international law.

The concept of the "first safe country" is, however, recognised in EU law, currently in the Asylum Procedures Directive and associated Regulations, which seeks to impose by procedural means to stop what is technically called secondary movement, a prohibition which is not recognised by international law.

Therefore, all those fine, upstanding eurosceptics who assert that those irregular migrants currently in Calais cannot be "by any normal definition a refugee", because they are already in a safe country, are relying on the EU law which they so detest and would have us rid of.

Even then, the safe country provision is permissory, and creates no obligation on a receiving state to invoke the provision. And crucially, it creates no obligation, legal or otherwise, on the potential refugee to demand asylum in any particular country. The EU Charter of Fundamental Rights itself guarantees a right to asylum, with no expressed caveats.

Moreover, the legal definition of a refugee applies to any person who, by reasons of fear of persecution, "is outside the country of his nationality and is unable or, owing to such fear, is unwilling to avail himself of the protection of that country" and is "unable or unwilling to return to it".

In other words, refugee status is defined by a person being outside their country of origin and being unable to return to it. It applies for as long as those criteria prevail, unless a person is able to acquire new nationality from a receiver state. The status does not depend in any way the location of the person once they have left their country of origin, or on how many countries they have travelled through.

Thus, those who claim that the potential refugees in Calais have no right to seek asylum in the UK are simply wrong.  This is misinformation of the highest order

Nevertheless, under current national immigration rules, the UK reserves the right under the EU's Dublin regulations to return migrants to the EU Member State where they first arrived (see para 345). But, as we remarked in our earlier piece, this is so hedged with caveats that only just over a thousand Dublin requests are made in a typical year, while incoming requests in 2012 actually exceeded outgoing. In all cases, though the number of actual transfers is considerably less.

Nothing there or anywhere else in any way interferes with the right of someone seeking international protection to demand asylum in any country of their choosing - as long as they are actually on the territory of that country. No one in the process of so doing can be prosecuted for a breach of immigration rules in entering a country for that purpose. There cannot be, therefore, any such thing as an "illegal asylum seeker". By that measure, people seeking asylum are not illegal immigrants.
Should Dublin Regulations be invoked, not the least of the requirements to be satisfied in transferring an asylum seeker from one country to the other is the ability to guarantee "effective protection" in that country, a provision impinged upon also by the European Convention on Human Rights (which must be taken into account in implementing EU law).

This is explored here at length. From this emerges the "complicity principle", "which prevents any country sending any person to another country knowing that the latter will violate rights which the sending country is itself obligated to respect".

Given human rights rulings on France and Germany, this further complicates issues. The simplistic bleatings of the pundits are very far from describing the situation with any accuracy.

And, on that basis, Leoluca Orlando in Palermo has a point. As members of the EU, we are parties to the train-wreck asylum policy that fences off legitimate asylum seekers and forces them to make their perilous journeys across the Mediterranean.

There are those, as we have seen, who are advocating genocide, or would condone it. But, for the rest of us, "genocide by default" is a legitimate charge. We cannot walk away from this. As long as we remain in the EU, we are part of it.