EU Referendum: don't use these leaflets

If the EU referendum is not to be held until the end of 2017 (or close to it), then we have over two years before we go to the polls. And it remains my belief that it will be that long.
Even if the poll is brought forward, it is still premature to run with a public campaign. If we go too early, people will be bored and become unresponsive to the message. In my view, therefore, we need to husband our strength and concentrate the campaign into the last three months.

In the interim, we have more than enough to be doing with planning, organising and building, plus the necessary skirmishing to test the strength of the enemy and to get a sense of his tactics.

To start now, as Ukip intends to do, aiming in the next fortnight to distribute two million copies of two leaflets, is in my view premature. Not only that, given the nature of the leaflets, the activity could be positively harmful – detracting from the overall effort.

Taking the first of the two (illustrated top), this shows people "trying to board a freight lorry in Calais heading for the UK", telling us that, "as long as we remain in the EU, this will keep happening".

That we have Ukip focusing on migration itself is bad news. The very last thing we want is this campaign focused on that subject. Doubtless, that was what created the glass ceiling for Ukip in the general election, robbing of any chance of electoral success. And now, it is planning to repeat the same mistake.

Worst still, the leaflet is grossly inaccurate, perpetuating what amounts to a lie. What is being shown are potential asylum seekers, but whatever their status, their presence owes more to the 1951 Geneva Convention on Refugees (and the 1967 Protocol) than it does EU law.

In term of the message conveyed by the leaflet, the UK leaving the EU could hardly affect the flow of migrants across the Mediterranean or the draw that the UK represents.

As the law stands, if these migrants manage to hide themselves aboard a lorry (is there such a thing as a "freight" lorry?), or otherwise get to the UK, and then surrender themselves to the authorities, they will be invoking the 1951 Convention. Leaving the EU will not change this.

But what makes this leaflet especially inept is that it ignores the reality of the situation, and the role of France.

Specifically, with the 1951 Convention in place, any person reaching UK soil and demanding asylum has to be processed by the UK authorities and, if they qualify, they must be given protection. Most, for various reasons, manage to remain in the UK.

Thus, the main line control is to keep them from gaining access to UK territory. And this is achieved, in respect of France, by way of the Le Touquet Treaty signed in February 2003.

This permits the UK to station immigration officers in ports on French soil, where they process passengers before departure. Potential asylum seekers are denied permission to travel and referred back to the French authorities for processing. That way, the UK is not forced to give them residence permits or provide them with housing and benefits.

With additional measures, these so-called "juxtaposed controls" have undoubtedly substantially reduced the inflow of migrants across the channel, especially as the agreement was later extended to the Eurostar terminal in Brussels.

Without the active and continued cooperation of European authorities, therefore, the problems we have would be inestimably worse. If the French withdrew their support, and opened the port gates to asylum seekers, one ferry-load could exceed the entire annual total. And if the UK left the EU without a negotiated deal (as some in Ukip would have us do), why would any continental authority want to help us? 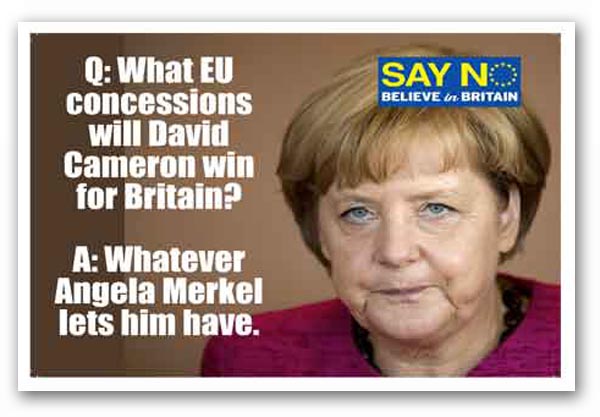 Therein lies the stupidity of the position, and it doesn't get much better with the second leaflet (above). The anti-German line may play well to some of the converted, but it's a cheap shot and simply reinforces the "Xenophobe" image, with which the opposition is so keen to tarnish us.

Also disturbing is that the front faces of these leaflets do not carry any Ukip identification. Instead, they bear the legend "Say NO – believe in Britain", thus purporting to represent the "no" campaign, which they do not. They do not speak in our name.

Thus, anyone who is tempted to comply with the Ukip request to distribute these leaflets really should think again. They do not convey a winning message and risk doing serious damage to the campaign. Furthermore, if you deliver them, you will be perpetrating a lie.

To Ukip generally, the message should be obvious, but it is not one to which they are disposed to listen. And this is why there are moves to exclude Ukip from the official campaign – if that is possible. And with this, the party seems to be intent on justifying those moves and making them even more necessary.