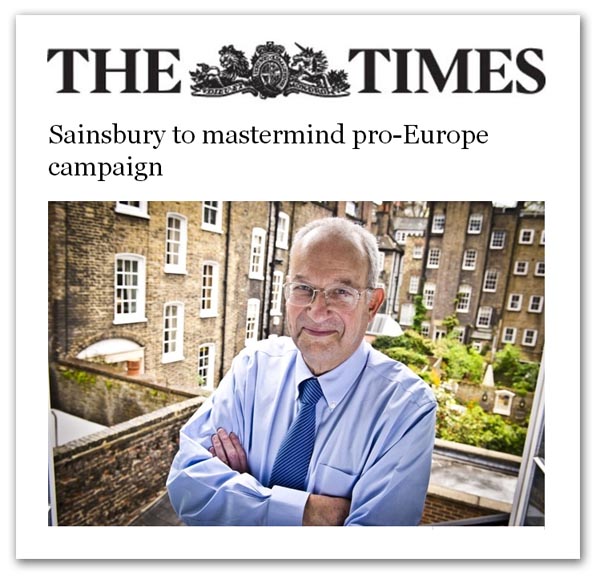 It makes a pleasant change to see reported trouble in the Europhile camp, with the Times telling us that Lord Sainsbury of Turville, the billionaire scion of the supermarket family, has begun work preparing for the launch of the "yes" campaign.

This is the business which, incidentally, recently posted news of falling sales for its fifth consecutive quarter. Once again, therefore, we have the boss of a failing business, which is not ill-disposed to a spot of mis-selling, seeking to tell us how we should be governed.

Nevertheless, despite the less than stellar performance of his business, Sainsbury has emerged as the driving force behind the campaign to keep Britain in the EU. The Labour peer is said to have a huge influence on the way the campaign will be conducted - even if he might be better employed minding his own business.

Sainsbury, whose own company has had its problems with corrupt staff, is now said to be "sharpening up" elements of the pro-EU organisation, and is considering who might run the overall "yes" campaign. That, though, is apparently not going to be Peter Wilding, founder and director of British Influence, whose organisation faces a funding cut by Sainsbury.

"It will be allowed to wither and quite possibly die", says a source close to the organisation. "It did not make the sort of impact it should have done. They were no good at public relations". It will get some funding from Lord Sainsbury, but "there will be a period of it going down".

Potentially forming the "yes" campaign are three organisation, including British Influence. The others are Business for New Europe (BNE), of "Lying Lucy" fame, overseen by Roland Rudd, the chairman of Finsbury PR, and the EU-funded European Movement, chaired by Laura Sandys, who stood down as a Tory MP in the general election.

Sandys and the BNE team are expected to play a significant role in the "yes" campaign, but it seems that the shape of the campaign remains unclear because no decisions have been taken about how Labour will organise its efforts during the campaign.

Some Labour figures, such as Andy Burnham, want to run a separate campaign organisation. However, some EU supporters fear the party may not give its full support for the EU if a leader such as Mr Burnham focuses excessively on winning back Ukip voters.

Here it starts to get even more interesting as Sainsbury is a Blairite, so there may be serious tensions in the camp  and even a split in campaigning objectives. The GMB union, for instance, may expect the "yes" campaign to push for strengthened enforcement of the minimum wage as the price of its support.

Perturbations in the "yes" camp, however, have implications for the "no" side, as the result may be a change in strategy. So far, we've seen the predictable but effective FUD campaign, and the negative "attack dog" ploy, picking up the inadequacies if the "no" side.

What we have barely seen is any attempt to see the "benefits" of EU involvement, or any intelligent focus on the inability of the "no" side to make an effective case for departure, or offer a credible exit plan.

For the Europhiles, though, and effective campaign is less important, as they main player on the pro-EU side is the Prime Minister, backed by the full resources of the Government. To a very great extent, that have as their ally the legacy media, which will happily bang the "reform" drum, confusing an already confused "no" campaign.

Nevertheless, on balance, to have a Labour billionaire businessman at the head of the Europhile effort is good for us. It serves to reinforce our message that the EU is a corporate ramp, loved by the fat-cats and the merchants who made "rip-off Britain" what it is.

If the "no" side have the sense to keep high-profile business figures out of sight, then we have clear blue water between the two campaigns, more so if the anti-EU fight is characterised as a people's campaign.

The very last thing we want to see is the overall campaign degenerate into a tedious squabble between rival business interests, over the economics of membership  making it playtime for the SW1 wonks, with ordinary people relegated to the status of bored spectators.