Booker and others: the referendum debate 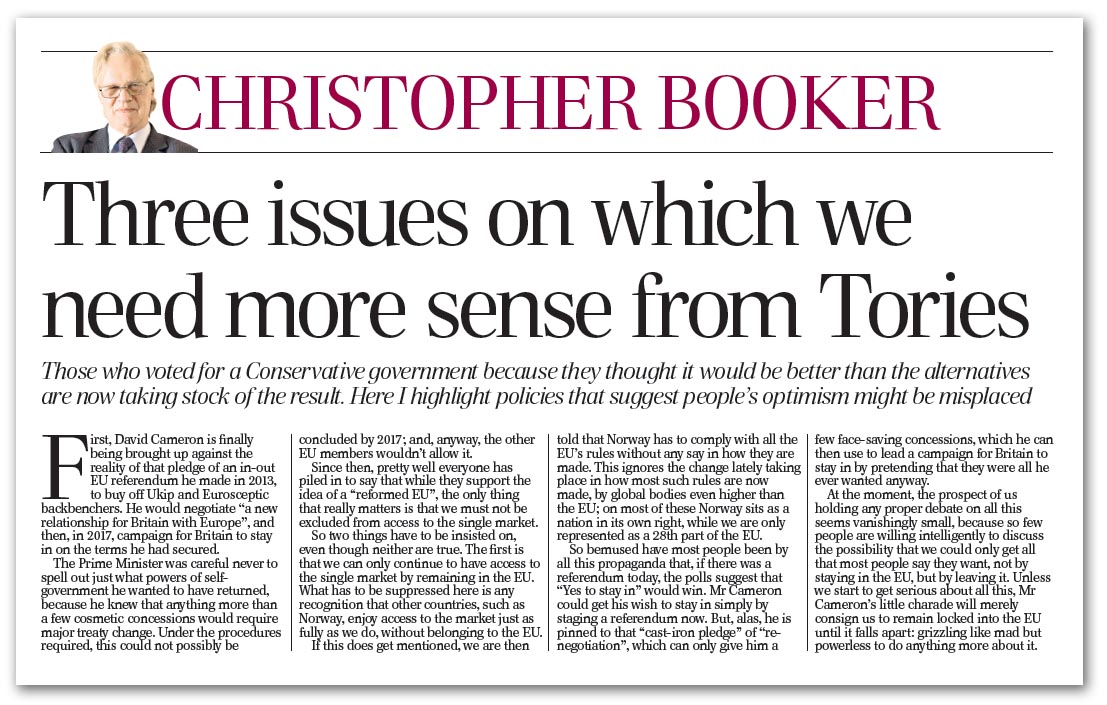 Booker writes some prophetic words this week, telling us that, at the moment, the prospect of us holding any proper debate on the EU referendum "seems vanishingly small".

"So few people", he says, "are willing intelligently to discuss the possibility that we could only get all that most people say they want, not by staying in the EU, but by leaving it". Unless we start to get serious about all this, Mr Cameron's little charade will merely consign us to remain locked into the EU until it falls apart: grizzling like mad but powerless to do anything more about it.

But then, as I was pointing out earlier, the politico-media nexus doesn't want an open debate. The denizens simply want to control it, in order to pursue their own agendas.

Add to that the antics of the Ukip leadership, which even the likes of Iain Martin have noticed: "are discrediting Euroscepticism and making a difficult-to-win referendum even more challenging for those who think Britain would be better off out of the EU", and we begin to have the makings of a very sick charade.

In this, though, the observations of Conservative election guru, Lynton Crosby – in yesterday's Telegraph - are also highly relevant. Referring to the treatment of the general election, he says that the political class badly misjudged the result. It was their "judgement day and they lost".

Political commentators - most of whom live inside the M25 - Crosby averred, just wanted "entertainment" from politics. The "last time they met a punter was when they picked up their dry cleaning", he says.

"It wasn't just Ed Miliband’s Labour Party that revealed itself as out of touch and remote from the people who are the backbone of Britain", he adds. "It was a failure for the Westminster-centric 'Eddie the Expert' and 'Clarrie the Commentator' who were tested and found wanting".

The trouble is that this very same claque of "Westminster village" commentators, who got it so egregiously wrong on the general election, are now focusing on the coming EU referendum. And having devoted nanoseconds to studying the problems, they are now set to instruct us mere provincial plebs on how the campaign should be run.

These are people who, at best, have a tenuous grasp of the workings of the EU, poor research skills and an endless propensity for getting it wrong.

By contrast, within our group that are currently working on the referendum, the very first thing we did was acquire multiple copies of the Butler & Kitzinger book on the 1975 referendum. All of us have read it several times, and I have acquired and read virtually every book written on the subject.

Recently, over the weeks, I have also being working through newspaper archives, reading up on the contemporary reports and analyses, all better to equip me to understand the issues and avoid making the same mistakes.

And while we, ourselves, actually called the general election right – and forecast the failure of Ukip - none of this cuts any ice with the Westminster Eddies and Clarries. Tapped into the village gossip, fortified by their nanoseconds of "research", they believe they know everything there is to know.

With their sublime certainties about their own superiority, they have sneered at and snubbed us for decades. And when we dare to return the contempt they show for us, they airily declare that they couldn't possibly work with us grubbly little oiks, because we are so howwid. Instead, we must subordinate ourselves to their greater wisdom, learn to be deferential as befits our standing, and remain totally invisible.

The irony is that these geniuses think it's sensible to snub the author and owner of the website named "EU Referendum", which will be first port of call in the coming campaign. Already, it is consistently number one in the Google rankings, taking 10,000 hits a day and rising steadily.

Contrary to claims made by some fragile little flowers who have had their egos bruised by our directness, we will (and do) work with anybody who regards themselves as a fellow toiler in the vineyard, on a cooperative basis. But we are not prepared to accept the assumptions of superiority from the Westminster claque and take directions from them simply because they assume they know better than everybody else.

If we are going to have the debate that Booker complains is missing, that is how it must be. And while the Westminster village may regard the referendum as another entertainment, Crosby has it banged to rights when he says it's not entertainment for us. It is a deadly serious issue, and I haven't spent the last twenty years working on this to have the Hooray Henries waltz in and treat the campaign as their personal plaything.

We've earned the right to be taken seriously - the right to be heard. And we are not in a mood to be messed about by people who were staring in the face of a Conservative election victory and didn't even see it coming.