EU referendum: the fallacy of the "big tent" 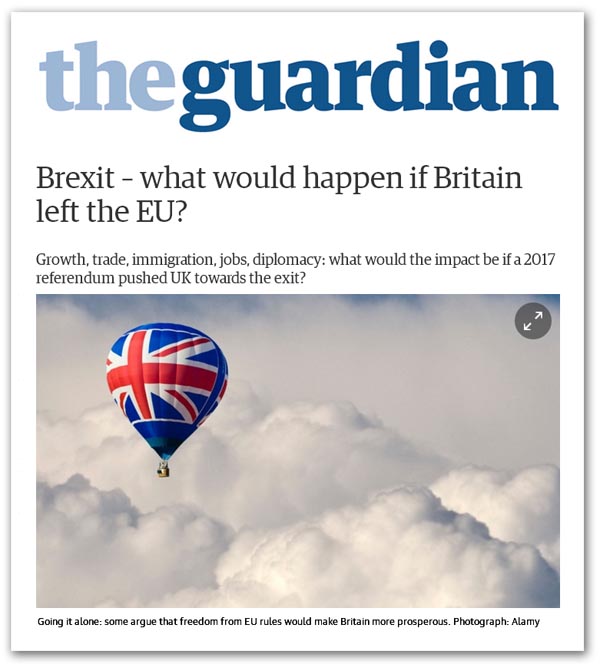 Yesterday, when the main focus was on Farage's Ukip train-wreck, the Guardian ran a long piece under the title: "Brexit – what would happen if Britain left the EU?"

The paper then goes on to tell us that its writers "have drawn on the best available expertise to assess what Brexit would mean for growth, jobs, trade, immigration and Britain's position in the world", setting out the case in those terms.

In this, though, there is a central and devastatingly effective lie – the paper's claim that it has drawn on "the best available expertise", a lie that then underpins the whole of its narrative.

What the paper has done, of course, is select those parts of the argument from the pro-EU side that best suits it case, and then contrast it with the weakest and least convincing elements of the eurosceptic case, drawing them together in the framework of what is presented as a neutral assessment.

This works in the context of defining the framework – or "framing the argument" as it is known, setting the parameters of the debate and rigorously excluding those issues which do not support the paper's narrative.

A singular feature of this particular piece, though, is the way it has exploited the disarray and lack of coherence in the putative "out" campaign, so obvious that even Matts Persson has noticed that it is "all over the place at the moment".

To that effect, Nigel Farage is freely quoted, as is the winning entry from the IEA's shambolic "Brexit" competition, together with Roger Bootle and Tim Congdon. Yet, the interesting thing is that, if one googles "EU referendum", the very first unsponsored entry is this blog – followed two entries later by the blogspot version – which we are reactivating.

No fair-minded person, looking for a balanced argument, could be unaware of the points such as we raise. The fact that they are omitted from the Guardian piece is because the newspaper doesn't want anything which will contradict it. It wants to frame the argument, and thereby distort it, in order to declare victory on its own terms.

To counter this, the "out" campaign needs to rally round a single message and impose rigorous message discipline. That way, when the campaign proper starts, and the likes of the Guardian play their baleful games - or there are interventions by any of the boundless egos who want to have their say - we have the option of declaring that their views do not represent the official "out" position.

In a campaign where we are challenging the status quo, the only chance of success rests with reassuring voters that withdrawal from the EU is a safe option. And that comes with a carefully thought-through and coherent exit plan.

But therein lies a dispute which is developing at the heart of the plans to set up the campaign. There are those who argue that we should not rally round a single plan, but instead should seek a "big tent" grouping.

The "big tent" advocates argue that we should form the group first, and then agree a common plan. In the event that there is no agreement on what the plan should be, each component group should be free to represent their own arguments as to why we should leave, and how we should go about leaving.

Such an inclusive campaign does, of course, bring in the maximum number of players. But, in my view, that way lies chaos and certain defeat. The chances of agreement on a common plan are, as we are finding, next to nil. Thus, the "big tenters" are setting us up to go into battle with each division working to its own plan - or none at all.

This is to abandon any chance of success. As we see with the Guardian, the opposition will simply cherry-pick the weakest arguments and the most divisive players, and highlight the inconsistencies and contradictions in the "out" positions. This will make it certain that we lose.

But then it seems to me that most of the players aren't even focused on winning, and what is needed to make that happen. For them, playing the game is all that matters. And to perpetuate their "big tent" fallacy, we are required to lose the referendum.