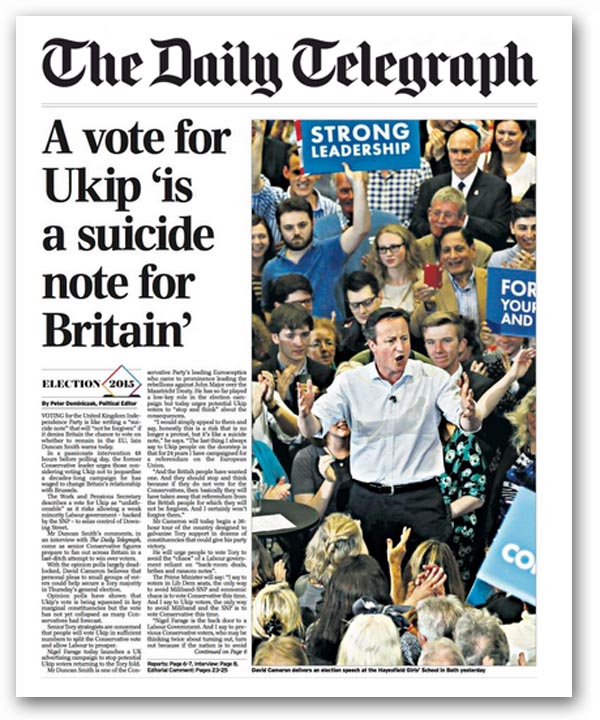 Considering how prominent Ukip has been in the run-up to this election, and its potentially pivotal role in determining which of the major parties takes office, I actually write relatively few pieces specifically about the party – and far less than the legacy media. Some newspapers run several Ukip-related stories each day.

Nevertheless, there is a tedious constancy about the occasional visitors to this site, who pop up whenever I do write a Ukip-related story, asserting that my hostile tone is motivated entirely by a "grudge" against Farage.

These are the sort of people who by their breadth of ignorance demonstrate that they rarely visit EU Referendum, yet seem to believe that by attacking me they can somehow exonerate their leader from his own incompetence, a man who still thinks we can have a referendum this year.

Farage has already tried that one and one might have supposed that he would have learned a lesson from the reactions. But that has never been his style – learning from experience. For Farage, Proverb 26-11 is an article of faith.

As to that grudge of mine, one should take it that Hamish Macdonell of The Times is similarly afflicted, having written of Ukip's Scottish launch on Monday, that:

One of Ukip's core arguments is that it is made up of real people, not the professional politicians who run the mainstream parties. That is certainly true: there was precious little professionalism on display in Falkirk. It was, quite frankly, one of the most botched and bungled events of recent political history …

At least the Times reporter found the event entertaining, but the entertainment value runs thin when one sees the studied incompetence of the party seriously threatening any progress towards a successful referendum campaign.

But then, when Iain Duncan-Smith writes that : "Voting for Ukip and Nigel Farage is like writing Britain's 'suicide note'", no doubt he is in the thrall of a grudge as well, as indeed must the Telegraph, for publishing his words on the front page (pictured top).

Nevertheless, the Work and Pensions Secretary says voting Ukip in the general election is "unfathomable" and people "will not be forgiven" for ruining the chances of holding an in-out referendum on Britain's membership of the EU.

And that latter part is true. One is reminded of Carswell, before he switched sides, telling us that that only the Conservative would guarantee us an "in-out" referendum, which would "only happen" if Mr Cameron was prime minister. No doubt, Mr Carswell had a grudge as well.

The fact is, though, that under the tenure of Mr Farage, the net effect of Mr Carswell's new party is to make an EU referendum less winnable, with YouGov now reporting a 12-point lead for the "inners", up two points since April.

No doubt, even to remark on that must be considered evidence of a grudge, because in Ukip-land, Farage still thinks he can take the country by storm in a 2015 referendum, and win the contest without even bothering to work up a credible exit plan.

Fortunately, the losers are losing, which means that, when this election is over, we can get back to addressing the problem of how to win a referendum without the distraction of Ukip and its train-wreck policies and its incompetence.

But once again, that has to be a grudge speaking. After all, if it wasn't for The Great Leader, we might already have a credible exit plan, Mr Cameron might be heading for an easier victory, and we might be ahead in the EU referendum polls. And that would never do.