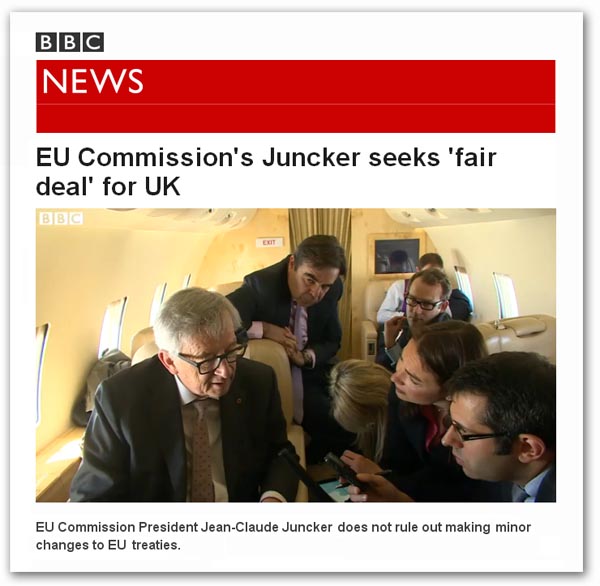 I wrote when it first appeared two weeks ago that The Times story was just so much empty fluff, doing nothing more than representing the inability of the legacy media reliably to report EU affairs.

My comment referred to the claim that Commission President Jean-Claude Juncker had "ruled out any treaty negotiations on Britain's relationship with Europe" until 2019, a fiction which – in typical lurid journalistic style - was said to "infuriate the prime minister".

The total lack of substance did not, of course, stop the story being copied out by the Telegraph in another typical example of media coprophagia – then faithfully replicated by a number of gullible readers. The Telegraph had already run a similar version of the story, back in February, making a habit of running unsubstantiated reports.
Ironically, it now takes the BBC's Katya Adler to interview Juncker, whence he puts the record straight. Sitting in the comfort of his private jet, he accused politicians and sections of the UK press of misreporting his position on treaty change. "I made it perfectly clear during the [European election] campaign that I want a fair deal with Britain", he says. "Unfortunately the British government and the British press are not listening and are blind when others are speaking so they did ignore that".

Juncker went on to complain directly about the Times report, which had quoted an "unnamed EU official". Said the Commission President, in an obvious rebuff to the newspaper: "I am the only EU official to be quoted when it comes to Britain".

Then confirming a refrain we on this blog have been pursing since November last year, Juncker says he does not rule out making minor changes to EU treaties. As one might expect, he is keeping his powder dry, saying it it was too early to decide what treaty changes might be necessary.

But, he says, "I do exclude major treaty changes as far as the freedom of movement is concerned - but other points can be mentioned," then adding: "I do think that we need a fair deal with Britain - but it's up to Britain to put forward their proposals, their requests, their ideas".

"It's up to them to take initiatives and then we'll take them under exam in a very polite, friendly, objective way", Juncker says, concluding with the obvious rider: "policy changes are [also] possible under the existing treaties". Thus does Juncker open the way for the Article 48 "simplified procedure" scenario that we have been tracking for all this time.

Without so much as a blush, though, the Telegraph picks up the story, and even the Wall Street Journal has a bite. The Express also covers the story, missing the point as always, reporting on "an apparent softening of his recent hostility" towards the referendum, despite Juncker affirming that his position has been constant since the European elections.

Inevitably, this is the sort of low grade reporting that we have become accustomed with the media. There can be no expectation of accurate reporting here. The media is simply not up to the task. It much prefers the simplistic biff-bam approach, which informs no-one and simply confuses the issues – something we should avoid.

However, for the intelligent analyst, the information is there – and we do seem to be still on track for Mr Cameron's treaty "victory" in time for a 2017 referendum. The media won't see it coming, of course, but at least we now have a clearer picture of their incompetence.