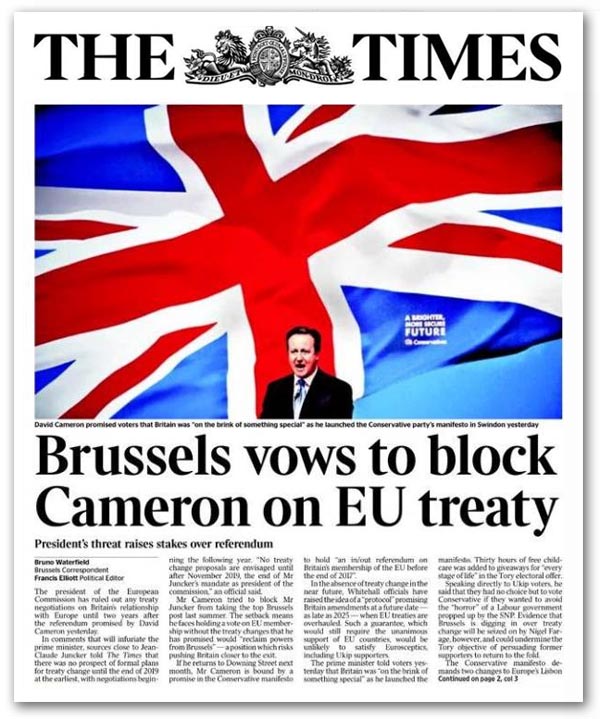 In a Times front page article today, that makes no sense at all, we are getting a typical dose of nonsense (to add to add to earlier nonsense) from a legacy media which has not yet learned the basics of the EU and its procedures.
The president of the European Commission, we are told, "has ruled out any treaty negotiations on Britain's relationship with Europe until two years after the referendum promised by David Cameron", all on the basis of anonymous "sources close to Jean-Claude Juncker".

This sort of low-grade journalism is bad enough, where the "sources" could be anything from the chauffeur pool to the office cleaners – totally beyond verification. But the ultimate trap into which The Times has fallen is to attribute this to the Commission President, who had no locus in the matter.

In terms of procedures, treaty change is one remaining area which is not in the gift of the Commission. It remains with the European Council and its President – currently Donald Tusk. The Commission does no have a say in the timing of treaty negotiations, and is not in a position to block member states if they decide upon a vote.

Thus, the slender claim from the newspaper – picked up by others - is meaningless. It is just so much empty fluff, which does nothing more than represent the inability of the legacy media reliably to report EU affairs.

Quite possibly, this is part of the theatricals, which the "colleagues" are so skilled in exploiting, all to magnify the obstacles Mr Cameron faces in seeking treaty change, then to create the semblance of a great victory when he finally "prevails" against the odds.

The only thing about which one can be certain though, with a media that still allows Mr Cameron to claim that he "vetoed" a treaty, is that it is unwise to rely on it for any sensible or accurate reporting on EU issues. Their ignorance is profound and their capacity to mislead is endless.