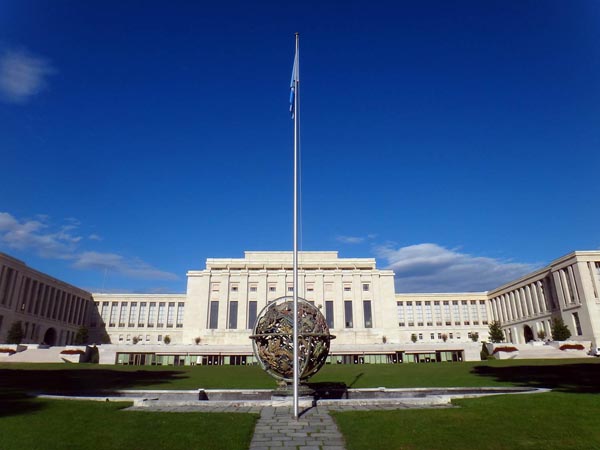 Following on from the latest Open Europe propaganda, we saw over the weekend in a repeat dose from their "senior political analyst", Christopher Howarth.

At least, in this instance, Howarth descended from his Olympian heights and attempted to argue his case in the comments, but thereby only managed to illustrate the thinness of their analysis. But Open Europe's problem, as we have earlier pointed out, is that they are in reality "little England" with no real idea of the way the world works.

Take for instance, the issue of packing cargo transport units (CTUs – or containers to you and I). Improved, common methodology is very much a practical requirement and, therefore, grist to the mill for international standards-setters, who have been on the case.

In this case, there have been three international organisations on the case, the IMO, the ILO and UNECE, working on a joint code of practice, the latest edition of which was finalised last year.

Alongside this, and entirely predictably, the EU has been producing its own road transport guidelines, which owe a great deal to the IMO/ILO/UNECE code, with all of them relying on specific EN standards, which are common to both texts.

We thus have a classic example of the international community getting together to solve a common problem, which – as the European Commission reminds us - is of some significance. Up to a quarter of truck accidents are linked to poorly secured loads.

However, the crucial rationale for the involvement of international bodies is that, without common rules, national authorities will make their own rules, making it hard for international transporters to know the minimum requirements for journeys covering several countries.

Some people argue for mutual recognition of standards, but pressure comes for common standards if accidents can be pinned on lower standards, especially if one country is seen to be gaining a commercial advantage from working to more relaxed codes. Domestic truck drivers are quick to complain (and rightly so) if foreign truck drivers are working to different standards.

And then, with a plethora of standards, enforcement becomes near-impossible, as vehicle inspectors are required to have a working familiarity with many different codes.

In this context, we are not dealing with mad regulators, creating rules for the sake of it. The rules save lives, reduce "red tape" and facilitate international trade. They are a hard-won asset and a properly constructed body of international law is something to be valued – not, as some would aver, to be removed as quickly as possible.

Therefore, few sensible people with dispute the need for international rules. And very often it makes no sense to have one set of rules for external trade and other for domestic application. Inevitably, there is a natural progression towards regulatory convergence over a wide range of non-contentious issues.

No one, for instance, is going to man the barricades because of an international requirement for all stop lights on vehicles to be red, or for battery sizes to be standardised, so that the same battery type will fit your camera, whether bought in London, New York or Tokyo.

What actually matters, therefore, is not the fact that rules but be agreed, but the way they are agreed – and the nature of the organisations that produce the rule. In short, this is the age-old battle, to which Booker and I referred, as between supranationalism and intergovernmentalism.

In the former, espoused by the EU, individual member states can be over-ruled under majority voting – thus over-riding the sovereignty of the members. In the latter, progress can only be made through consensus, and any one member state can opt out of provisions they do not accept.

The difference is more than adequately summed up in the short history of the 56-member United Nations Economic Commission Europe (UNECE), tells us of the early days of the Commission and the rules set by its first Executive Secretary, Gunnar Myrdal – previously Swedish Minister of Trade:

Very rapidly, Myrdal set out a method and two rules to ensure that the work of the subsidiary organs of the Commission would be practical and acceptable to all parties. First, the method was that "big and general problems, which are set forth in [the] terms of reference [of the subsidiary organs], are tackled in their technical aspects, by dividing these wider problems into their composite parts, so clearly stated and defined that government experts can usefully and effectively discuss them between themselves and seek agreement on practical solutions".

Second, his two rules were that "no meeting is better than a bad one" and that as a rule issues should not be brought to a vote in the working organs of the Commission. "This practice is founded upon recognition of the fact that no economic problem, indeed no important problem whatsoever, concerning sovereign governments can be solved by a majority decision in an intergovernmental organization, but only by agreements between as many governments as are willing to consent".

It is this latter founding rule that defines the essence of an intergovernmental organisation, and is the very antithesis of the regime set up by Jean Monnet, in establishing what has become the EU.

Here, there is also another crucial difference. A key feature of the EU is that the Commission holds the monopoly of proposal, so that only it can propose new laws. And since the only way a law can be removed is by proposing one to abolish it, by this means the Commission retains absolute control over the acquis.

The difference with UNECE is that any member state can propose a new standard (often called "UN Regulations"), and the organisation has a particular tool called the Common Regulatory Objective (CRO), where members can define their needs and convert them into international standards.

Then, through the mechanisms of the WTO Agreement on Technical Barriers to Trade, these can be adopted globally – and in particular by the EU, which is a signatory to the agreement. UNECE thus has the capability and the mechanisms for defining Single Market standards.

Delors then was proposing equal partnership in the "European village", with common decision-making in the formulation of the Single Market rule book. And, although, exactly a year later, he was to rescind that offer, the process has actually lived on through UNECE.

In much of my earlier writing about this organisation, though, I have been focused on the car industry and the UNECE-hosted World Forum on the Harmonisation of Vehicle Regulations, known by its short title of WP.29. But just as interesting is Working Party on Regulatory Cooperation and Standardisation Policies, known as WP.6.

This is described as a forum for dialogue among regulators and policy makers, where they discuss a wide range of issues, including technical regulations, standardisation, conformity assessment, metrology, market surveillance and risk management.

The Working Party, through its terms of reference, "makes recommendations that promote regulatory policies to protect the health and safety of consumers and workers, and preserve our natural environment, without creating unnecessary barriers to trade and investment". There is more detail in this brochure.

In common with much international quasi-legislation, none of this has binding effect, but that doesn't stop many of the recommendations becoming regulation through the EU and directly through national legislatures, or from being adopted as guidelines or codes of practice, which can also be given mandatory force.

The work on the container code of practice, with which we opened this piece, however, is handled by one of its many transport committees, the scope of which is vast – so much so that it is truly amazing that the organisation remains so obscure.

This is especially more so as UNECE is a champion of the nation state, remarking in its history document that, despite wild claims from operators in the financial markets, a few multinational companies, and the occasional visionary that the nation state is dead or redundant, a remarkable feature of the new age of globalisation is its resilience.

Indeed, it says, looking at its growth over the last sixty years or so the nation state has prospered: the membership of the United Nations in 1945 was 51 states, rising to 152 in 1979, the year when globalisation was on the point of acceleration, and to 192 today.

Thus, when we look to the future, and the prospect of withdrawing from the EU via the "Norway Option", we then have to think about the next step. That is replacing the EEA with a genuine Single Market, in which there is common decision-making in the "European village", as between the EU and all other nations.

Rather than seeking to re-invent the wheel, as so many have tried to do, we can look to an organisation which is already in place, one which has a sixty-year history of managing intergovernmental forums and has considerable experience in developing the process of globalisation - UNECE. That defines our "European village".

In its own words, the competence of this organisation, the engrained habits of cooperation, the treatment of all participants on an equal footing, and the demonstration that respect for diversity is compatible with economic and social progress, all add up to a civilised message and inspire confidence in the capacity of [UN]ECE to continue to provide good service to the governments and the people of the region.

With that, we end up with a hybrid exit model, which starts off with the "Norway Option" to get us out of the EU and morphs into a UNECE-administered Single Market, hosting the common decision-making process and replacing the EEA. This becomes the "Norway/UNECE Option" - or EFTA/UNECE if you prefer.  What's there not to like?