Asylum: down at the dirty end 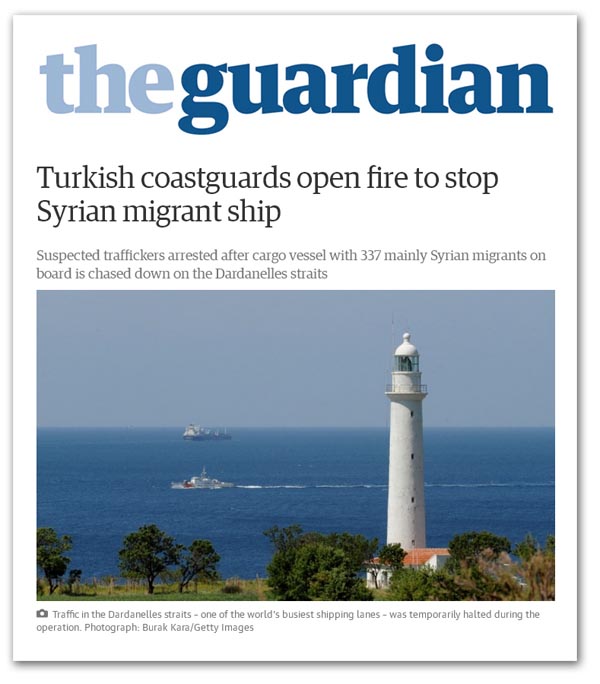 At the beginning of the week, we saw reports of a United Nations condemnation of Australia's asylum policy – speficially its treatment of the so-called "boat people". This was met with a typically robust rebuttal from Tony Abbott, who complained about being "lectured" by the UN.

These episodes made for an interesting, if not stark, comparison with a later report which asked whether "letting Syrian refugees drown in the Med to deter others" was now UK policy.

Arguably, it is not. The Mediterranean region is no longer a British sphere of interest, even if we made it so when we undertook joint actions against Libya. The primary responsibility rests with the maritime states, and especially Italy, Greece, and of course, Turkey.

But dealing with the traditional small boats is only part of the equation. Some of the wealthier refugees have taken to hiring the services of people smugglers to produce larger cargo ships, mainly out of Turkish porst, delivering people by their hundreds to [mainly] Italy.

Now, there has been a major development, with a report of a Turkish coastguard cutter opening fire to stop a cargo vessel carrying 337 mainly Syrian migrants, including 85 children and 68 women, heading towards the waters of EU member states.

Coastguards had launched an operation to chase down the 180-ft Istanbul registered Dogan Kartal as it headed through the Dardanelles straits, initially ignoring calls to stop, including warning shots. It was eventually forced to halt when the coastguards fired on the engines.

No more details seem to have been released, but there is bound to be more to this than we have currently been told. With the Turkish authorities having so far shown little enthusiasm for tracking and hunting down people smugglers, for this suddenly to happen suggests there has been some back-room deal.

Turkey, in intercepting these people, now bears the considerable cost of looking after them, and is also sending a message to other potential refugees not to attempt the journey – further adding to the country's already considerable costs in accommodating Syrian refugees.

If Turkey has been offered some financial assistance, or some other incentive, then this would be a measure of where Europe's real border controls start. Some of those migrants might easily have found their way to the UK, and that is where our controls also start.

This is something the Ukip zealots need to come to terms with. If asylum seekers arrive on our doorstep, under the terms of the 1951 Refugee Convention (and 1967 Protocol), we are obliged to accept them. Returning them to their point of entry in Europe is notoriously difficult and most end up being given leave to remain.

Furthermore, for those who do escape the net, and end up in Calais or other Channel ports, we have the facility afforded by neighbouring countries to post our own immigration officers to prevent potential migrants embarking without papers. If countries such as France and Belgium withdrew their cooperation, and even started waving asylum seekers through, we would be in serious trouble.

All of this underlines the simple fact that we cannot manage asylum policy on our own. We are not Australia – we can't intercept the ships in Turkish waters, and we don't have convenient islands on which we can dump our unwanted humanity. Like or not, we need "Europe" and countries such as Turkey – and more than they need us.