UKIP: the dimmest of the dim 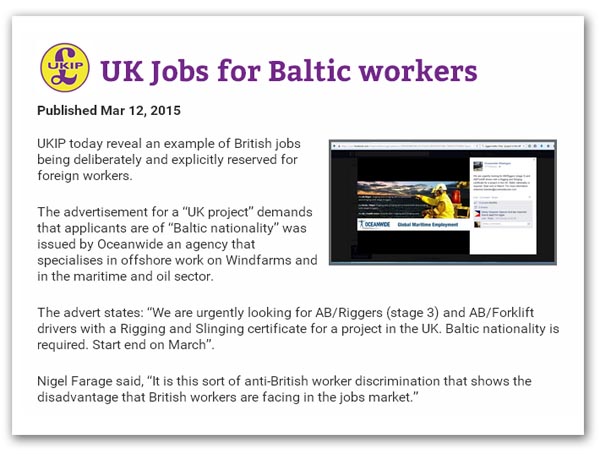 With Farage having landed himself in hot water, once again, his lacklustre cult masquerading as a party is trying to run interference by complaining of a job advertisement by Oceanwide Vlissingen for riggers and forklift operators, to work on a project in the UK.

Warming to its task, the party/cult tells us that the advertisement for a "UK project" demands that applicants are of "Baltic nationality", giving a platform to Farage to whinge that: "It is this sort of anti-British worker discrimination that shows the disadvantage that British workers are facing in the jobs market".

This is then reinforced by a boilerplate quote from Jane Collins, UKIP's employment spokesman. She says:

It is a sad indictment of government that we are importing labour from the Baltic States to fill UK vacancies, when we still have 1.9 million people unemployed. This is a prime example of what UKIP has been saying about British jobs for British people, as it is simply ridiculous that only employees from the Baltic States should staff a UK project.

However, as Complete Bastard points out, what the Ukip muppets have done is get hold of the English-language version of the advert published by the company's St Peterburg office, which recruits both Russian and Eastern European (i.e., Baltic) seamen for a variety of tasks.

As is customary for all agencies recruiting in this catchment area of mixed nationalities comprising Russians and some EU citizens, when advertising for jobs in the EEA, potential Russian applicants have to be excluded. They are not entitled to take up work there. Thus, as can be readily discerned from multiple websites, such jobs bear the legend "Baltic nationality" or sometimes "Baltic nationality only", this being more tactful than "no Russians", which is what it actually means.
The same jobs are also advertised on a Russian site with a contact point in Ukraine, bearing the standard legend, "Baltic nationality only". Elsewhere, though, on sites advertising within the EU area, the requirement is for "EU nationality", with not a hint of the "discrimination" of which Farage wrongly complains.

How absolutely typical it is of Ukip to get the wrong end of the stick, and even then it still manages to contradict itself. As the Guardian happily points out, the advert by Oceanwide Vlissingen would be "illegal under the EU laws Farage is complaining about, which say that all EU citizens have to be treated equally".

But, of course, this particular advert and the many like it would never be illegal, as they are directed to applicants outside the EU, where discrimination between EEA and other nationalities is permitted. In effect, "Baltic nationality" is anti-Russian, protecting the jobs of the British (and other citizens of EU member states) from the foreign hordes.

All we are left with then is another example of Ukip under-performing, adequate testimony as to why you wouldn't even trust the party with a TV remote.