EU politics: a story without substance 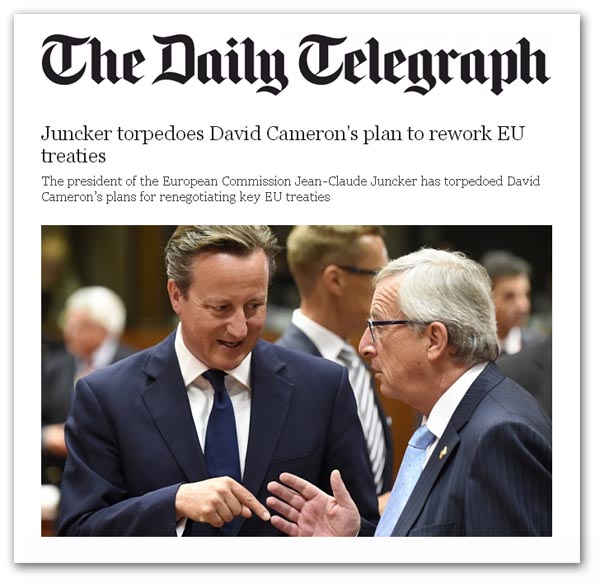 David Cameron's "planned timetable" for renegotiating EU treaties has, we are told by the Telegraph, has been "torpedoed" by Commission President Jean-Claude Juncker.

This feat, we are supposed to believe, has been achieved by the simple expedient of "scrapping a key paper on the future of the eurozone", one which is not identified by the newspaper, but supposedly an "analytical note" on "stronger economic policy coordination, convergence and solidarity". This, Juncker – we are told - was instructed last December to prepare for discussion by "EU leaders".

We must also accept from the Telegraph that the Prime Minister – without any evidence adduced to that effect - regarded this unidentified paper as a key "staging post" in signalling that his plans for a renegotiation for Britain could be delivered as part of treaty change to "ensure the smooth functioning of the Economic and Monetary Union".

By way of sources for all this, all we have to rely on is claimed "senior European diplomats" – rank, position, identity and nationality unknown – who are said to have told the Telegraph that the "blueprint" was dropped because of fears that any failure to directly address "the British question" could trigger "repercussions" ahead of the general election in May.

To one of these anonymous people is then attributed the following words: "It is very easy to damage the UK government, if such a paper starts to speculate on treaty change then you are in trouble", with this so-called senior diplomat also saying: "I could only imagine what kind of repercussions it might have".

With no more evidential support, we are then informed that Mr Cameron's strategy "is dependent on EU treaty changes to address the eurozone crisis and Downing Street had hoped that the paper from Mr Juncker would put that firmly on the political agenda".

This, though, is old hat. Certainly, there is very good evidence for the idea that "handbagging" a treaty generated by the "colleagues" was Mr Cameron's original plan but – as we discussed only recently - it has long been the case that plans for a treaty to address the eurozone problems have been shelved, and will not re-emerge in the foreseeable future.

Neither would there be any prospect of Mr Cameron being able to hijack the negotiations, as the planned treaty would have involved a convention as well as an IGC, putting it outside the timeframe for a 2017 referendum.

Thus, we have begun to see signals from Mr Cameron of a change of strategy, of which the Telegraph is aware but chooses to ignore, sticking to an outdated narrative to create a story empty of substance, with no evidential support, entirely lacking in corroborative detail.

Of some margin interest, though, is the claim that at the European Council in June (which the fatuous Telegraph still insists on calling a "summit"), Mr Cameron, if he is still Prime Minister, "will be asked to make concrete proposals for treaty change by the autumn of 2015 but will face stiff opposition".

That is entirely compatible with the idea that HMG is going for an Article 48 "simplified procedure" treaty, parking the eurozone questions for a later date – which is something that was decided many moons ago.

Otherwise, it is totally beyond me as to why we are supposed to be impressed, or even swayed, by a shallow story which makes a number of entirely unsupported claims, built on anonymous sources offering opinions which have no evidential support, with no corroborating detail.

If I wrote a supposedly factual report on such a slender base, my readers would (rightly) laugh me out of court.