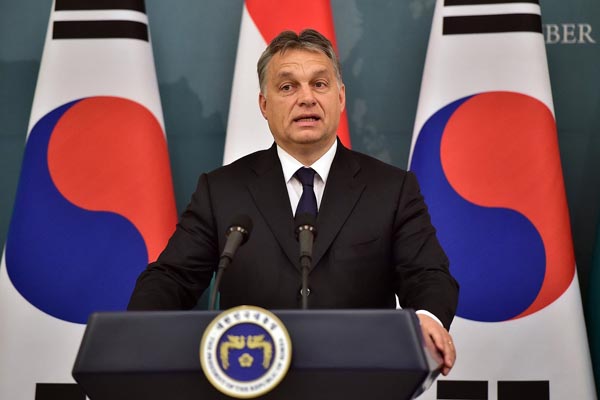 Jean-Claude Juncker says he is prepared to examine the UK's demands on how the EU should change – or so we are told by Bloomberg. but there is a caveat: he will not allow certain "red lines", including on immigration issues, to be crossed.

But what grabs the headline is the Commission President comparing EU-UK relations to a love affair. "It's easy to fall in love and more difficult to stay together", Juncker says, also observing that, "people shouldn't stay together if the conditions aren't the same as when things started".

That, of course, is horse manure: conditions always change, so the test is whether people can adapt to them. In the case of the EU though, which – at best – was a loveless, arranged marriage, there never was a situation when we should have stayed together.

Nevertheless, while Juncker still feels that, "it's in the interest of both the UK and the EU to stay together", he reaffirms that he won't weaken the EU's fundamental principles.

"When one mentions the end of the free circulation of workers, there can be no debate, dialogue or compromise", he says. "We can fight against abuses - and national lawmakers can do that - but the EU lawmakers won't change the treaties to satisfy the will of certain politicians".

So, it seems, Juncker is still playing the "bad cop" against Merkel's "good cop", although he's not saying anything very new.

Interestingly, though, Mr Cameron could be acquiring another ally, in Hungary's prime minister. Yesterday, he was urging the EU to limit immigration, saying that some people were abusing the asylum rules, when they were actually seeking employment.

This is Viktor Orban, who says he believes the EU's laws on asylum should be tightened, just a week after he said in the wake of the Charlie Hebdo attacks in Paris that immigration into Europe should stop – with not an EU flag in sight (pictured).

"This is a Christian country", he said on a Sunday radio talk show. "We can help those who are indeed chased out of their countries, but we have to make it clear we don’t want to be the destination for immigrants seeking to make a living here".

The number seeking asylum last year in Hungary was 43,000 last year, double the figure in 2013, Mr. Orban says, a large number in relation to Hungary's total population of a little below ten million.

"If Europe continues to bury its head in the sand, these trends won't change. It now seems like Brussels won't shield us from this issue; we have to protect ourselves", Orban adds, then saying that the Dublin Regulation should be upheld, so that those immigrants who manage to escape farther westward within the EU can be transported back to the country where they entered the EU.

Hungary is perhaps not the best of allies though. It gets asylum seekers routed through its territory from Greece and Bulgaria, most often via Serbia, where there were 19,951 illegal crossings in 2013, up 212 percent on the previous year. But in Hungary, though – as the German broadcaster Spiegel reported in September 2014, there is no functioning asylum system. Illegal detention is routine and guards use drugs to sedate migrants.

The few existing facilities are overflowing, so that many refugees are housed in former military barracks or community buildings converted into prisons for migrants. In April 2014, more than 40 percent of all male asylum seekers were being housed in a prison. The reasons for arrest were arbitrary and unclear. As a rule, migrants were held for a month without having committed a crime.

The UNHCR has been criticalof conditions in the asylum prisons, calling them "inhumane and demeaning".

Detainees remained behind bars typically for four to five months, while some for the entire length of their asylum procedure. They were locked in their cells much of the day, suffered verbal and physical abuse by the security guards, and were escorted in handcuffs and on leashes to the court hearings or even to doctors, treated like a criminal.

Hungarian authorities often automatically started the aliens police procedure and ordered detention of asylum-seekers. Courts tended to review detention orders in group hearings, dealing with the case of 5-10 people in 30 minutes that was not enough time properly to consider the facts of each individual case.

However, resistance to the flow of asylum seekers is also manifest in the Czech Republic where, on Friday, hundreds showed up for a rally in which protesters objected to allowing Muslims to settle in Central Europe (even after this Monday's Pegida rally had been cancelled.

The centre-left Czech government has so far been reluctant to offer asylum to refugees from the Middle East because of concerns that potential terrorists might be among them. It eventually agreed to take in 70 Syrian refugees under EU pressure, against thousands presenting themselves to the rest of the EU.

But that also makes the Czech government a potential ally for Mr Cameron, who is not looking quite so isolated on this issue as some might aver. Softly, softly, "Europe" is going his way. He may well confound Juncker, and bring home his treaty, sufficient for him to call upon the British to renew their wedding vows.