Booker: asylum seekers – the worst of all EU policies 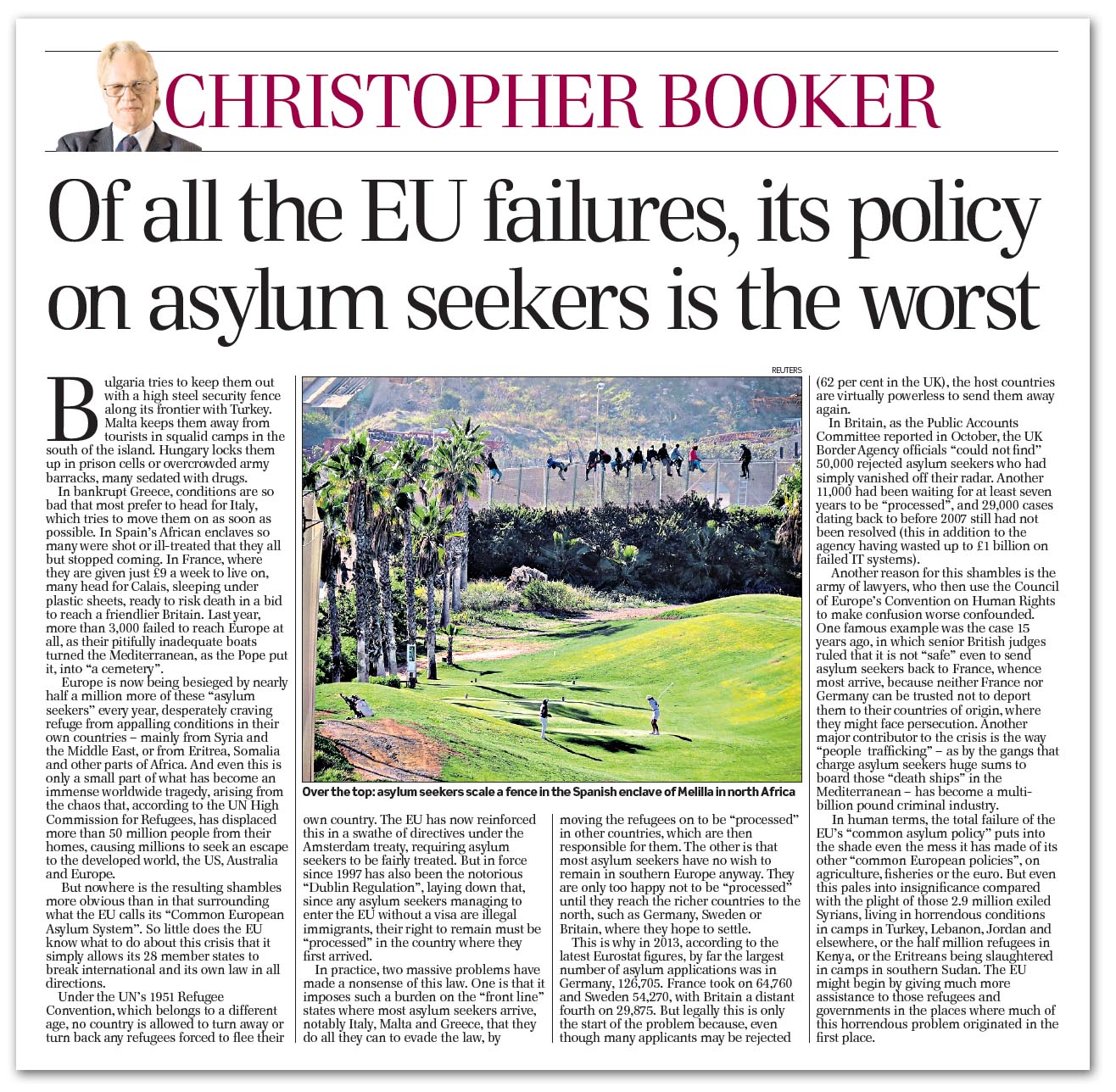 Bulgaria tries to keep them out with a high steel security fence along its frontier with Turkey. Malta keeps them away from tourists in squalid camps in the south of the island. Hungary locks them up in prison cells or overcrowded army barracks, many sedated with drugs.

Thus writes Booker, picking up on element of EU policy that has so far evaded widespread critical comment. In bankrupt Greece, he tells us, conditions are so bad that most prefer to head for Italy, which tries to move them on as soon as possible. In Spain's African enclaves, so many were shot or ill-treated that they all but stopped coming.

In France, where they are given just £9 a week to live on, many head for Calais, sleeping under plastic sheets, ready to risk death in a bid to reach a friendlier Britain. Last year, more than 3,000 failed to reach Europe at all, as their pitifully inadequate boats turned the Mediterranean, as the Pope put it, into "a cemetery".

Europe is now being besieged by nearly half a million more of these "asylum seekers" every year, desperately craving refuge from appalling conditions in their own countries – mainly from Syria and the Middle East, or from Eritrea, Somalia and other parts of Africa.

And even this is only a small part of what has become an immense worldwide tragedy, arising from the chaos that, according to the UN High Commission for Refugees, has displaced more than 50 million people from their homes, causing millions to seek an escape to the developed world, the US, Australia and Europe.

But nowhere is the resulting shambles more obvious than in that surrounding what the EU calls its "Common European Asylum System". So little does the EU know what to do about this crisis that it simply allows its 28 member states to break international and its own law in all directions.

Under the UN's 1951 Refugee Convention, which belongs to a different age, no country is allowed to turn away or turn back any refugees forced to flee their own country. The EU has now reinforced this in a swathe of directives under the Amsterdam treaty, requiring asylum seekers to be fairly treated.

But in force since 1997 has also been the notorious "Dublin Regulation", laying down that, since any asylum seekers managing to enter the EU without a visa are illegal immigrants, their right to remain must be "processed" in the country where they first arrived.

In practice, two massive problems have made a nonsense of this law. One is that it imposes such a burden on the "front line" states where most asylum seekers arrive, notably Italy, Malta and Greece, that they do all they can to evade the law, by moving the refugees on to be "processed" in other countries, which are then responsible for them.

The other is that most asylum seekers have no wish to remain in southern Europe anyway. They are only too happy not to be "processed" until they reach the richer countries to the north, such as Germany, Sweden or Britain, where they hope to settle.

This is why, in 2013, according to the latest Eurostat figures, by far the largest number of asylum applications was in Germany, 126,705. France took on 64,760 and Sweden 54,270, with Britain a distant fourth on 29,875. But legally this is only the start of the problem because, even though many applicants may be rejected (62 per cent in the UK), the host countries are virtually powerless to send them away again.

In Britain, as the Public Accounts Committee reported in October, the UK Border Agency officials "could not find" 50,000 rejected asylum seekers who had simply vanished off their radar. Another 11,000 had been waiting for at least seven years to be "processed", and 29,000 cases dating back to before 2007 still had not been resolved (this in addition to the agency having wasted up to £1 billion on failed IT systems).

Another reason for this shambles is the army of lawyers, who then use the Council of Europe's Convention on Human Rights to make confusion worse confounded. One famous example was the case 15 years ago, in which senior British judges ruled that it is not "safe" even to send asylum seekers back to France, whence most arrive, because neither France nor Germany can be trusted not to deport them to their countries of origin, where they might face persecution.

Another major contributor to the crisis is the way "people trafficking" – as by the gangs that charge asylum seekers huge sums to board those "death ships" in the Mediterranean – has become a multi-billion-pound criminal industry.

In human terms, the total failure of the EU's "common asylum policy" puts into the shade even the mess it has made of its other "common European policies", on agriculture, fisheries or the euro.

But even this pales into insignificance compared with the plight of those 2.9 million exiled Syrians, living in horrendous conditions in camps in Turkey, Lebanon, Jordan and elsewhere, or the half-million refugees in Kenya, or the Eritreans being slaughtered in camps in southern Sudan.

The EU might begin by giving much more assistance to those refugees and governments in the places where much of this horrendous problem originated in the first place.