EU referendum: getting closer to the treaty 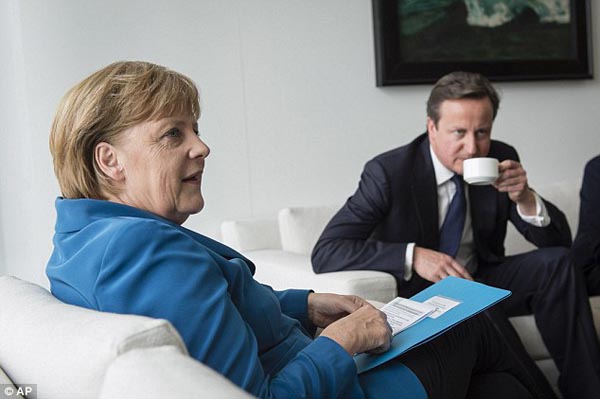 Cutting through the fluff, we note the report on today's visit by Angela Merkel, which tells us that the German Chancellor is understood to have indicated to the Prime Minister that she is prepared to back his proposals for strict limits on migrant access to benefits and public services.
British officials, we are further informed, hope the German leader will signal support for new rules to persuade British voters to vote "in" in a referendum on EU membership planned if Mr Cameron remains in Number Ten after May's general election.

And there lies the germ of a treaty. There is a distinct possibility here that we are seeing the foundations laid for an Article 48 "simplified revision procedure" treaty, albeit the language coded and obscure.

If we are anywhere near to identifying the path chosen by Mr Cameron – and there does not seem to be any other credible alternative – then these are dangerous days for Eurosceptics.

One recalls how easily the media was gulled into believing in Mr Cameron's treaty "veto", so much so that even to this day the Prime Minister parades this non-existent victory. It is thus entirely possible that the media will accept claims for a new treaty, and fall in behind calls for remain in the EU, on the basis of successful "reform".

What is particularly exasperating here is that the likes of the Financial Times, with its pretensions of "high quality global journalism" is misreading the meeting, telling us that Merkel "is expected to remind Mr Cameron that Germany will not back any British demands for a major rewrite of existing EU treaties".

The paper goes on to acknowledge that Mr Cameron has in recent days said his proposed reforms would require treaty change, but then informs us that Merkel "opposes any British deal that would lead to an unstitching of EU treaties or require ratification by referendums in any member state".

But, if the FT stopped one moment to think about what it had written, that does not in any way rule out a "simplified revision procedure" treaty, covering specific measures on benefits and public services, relating to migrants. Thus, despite a headline that says Merkel is to "rule out treaty change", there is everything to play for.

That much is evident also from the exposition in Deutsche Welle, which raises the possibility – if tangentially – of amending Article 45 of the TFEU, noting that Cameron would "require alterations to EU treaties" while being confident that he would be able to "get that done".

We are also getting similar mood music from The Times. Under the headline, "Merkel backs migrant benefit cuts", we are told: "Hopes are rising in Downing Street, however, that Mrs Merkel will go further than ever in backing changes to EU treaties beyond those needed to reform the eurozone".

Mr Cameron, Nick Clegg and Ed Miliband, the paper says, "have backed the idea of scrapping rules that allow EU migrants to claim benefits for their children who still live in their home country. The payouts cost Britain about Ł30 million each year. Rules on the payment of child benefit abroad are enshrined in EU treaties, meaning that all member states would have to agree to alter them. Germany is considered to hold particular sway".

Nevertheless, one expects the media to play up the personality politics, to the exclusion of any more detailed analysis. They will need little encouragement to stoke up high-level theatricals, invoking a dispute between Merkel and Cameron, and such would serve all the better to pave the way for another of Mr Cameron's victories.

It would be unforgivable, though, if the eurosceptic community allowed this "play" to be completed without challenge, or without us explaining how attempts are being made to manipulate public opinion.

Without pre-emptive action, I see us being outflanked - is exactly what is in danger of happening if we look at the Ukip response. They seem blissfully unaware that we face the prospect of a referendum on the basis of "successful" renegotiations and a new treaty, which would have us fighting a losing battle.

Mr Cameron bringing a treaty back from Brussels would be a formidable opponent, and the sooner we start cutting through the Ukip amateurism and discounting his ploy, the better.