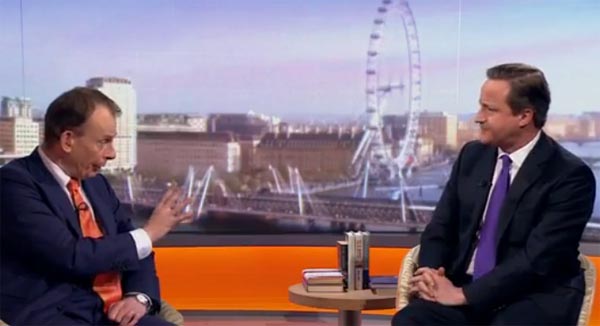 Challenged by Andrew Marr on his television show yesterday, as to whether he'd drawn back from his position last year on EU "reforms", David Cameron was quick to deny any retreat.

The changes, he was seeking, he said, "… do involve treaty change, and proper, full-on treaty change. We need to get out of ever closer union, that is something that shouldn't apply to the United Kingdom, we need parliaments to be able to combine to block regulations, I think that is very important, we need guarantees that as the single currency gets more countries in it the single market which Britain remains in is properly protected".

"Crucially", Mr Cameron added, "on the question of immigration we need these very big changes that I'm putting forward to the welfare system that will require treaty change".

This leaves us with the prospect of a Prime Minister who is so ignorant of the realities of the Lisbon Treaty that he does not understand that a "proper, full-on treaty change" is impossible – if by that he means the "ordinary revision procedure", which requires a "full-on" convention.

It does seem hard to believe that this is the case, which leaves us with the alternative, and possibly more plausible scenario that Mr Cameron will be bidding for an Article 48 "simplified revision procedure", confining treaty revisions to Part III of the TFEU – a play, we suggested at the end of November, after the "immigration" speech.

The significance of this, however, has been universally ignored in media reports, which have largely focused on Marr's questioning on the effect of a 2017 referendum on any new administration.

"Committed to a 2017 referendum, that's going to mean that, if you are re-elected with a majority government, you are going to spend the first two years engaged in intense internal and insupportable argument inside your party about nothing except Europe", Marr said, then asking: "Are you still committed to 2017 as the referendum date, or could you bring it nearer?"

The context in which this response is made is important, for it offers no promise of an early referendum. Simply Mr Cameron gives his non-committal and highly conditional agreement that, if it was possible to bring forward the referendum, he would do so.

Such equivocation, however, been elevated by the likes of the Telegraph and others, to give it far more significance than it merits.

We even have The Times asserting that the statement "potentially clears the path for a coalition agreement with Ukip after the election. Nigel Farage has made a swift EU referendum its key 'red line' in any deal with the Tories".

By any measure, these accounts are a serious distortion, apparently leading Ukip leader Nigel Farage to misread the situation. He spoke on the Sky News Murnaghan Show, declaring: "The Cameron offering frankly isn't good enough in the sense that it's all been kicked into the long grass into 2017 following a renegotiation that looks highly improbable at any level".

Even though Mr Farage then went to assert: "… I need a referendum, we need a referendum", he also insisted that "the best way to win an EU referendum was to get as many Ukip MPs elected to the Commons as possible". There is no indication, thus, that he has any understanding of Mr Cameron's possible strategies.

As it stands currently, though, the scenario of an Article 48 "simplified revision procedure" is the only possible play that can give Mr Cameron a treaty change in time for his 2017 referendum, and thereby give him a good chance of winning a referendum by presenting a "successful" renegotiation.

The Prime Minister is to hold talks with Angela Merkel when she visits London this week, and the mood music may give some hints of where she stands on the possibility of an Article 48 "simplified procedure" treaty.

My guess is though, after another Monday Pegida march, Merkel will be playing to the gallery, adding to the theatre that will eventually pave the way for Mr Cameron's great "victory". Either way, though, it doesn't look as if the media and most of the pundits will see it coming.