UKIP: when the wheels fall off 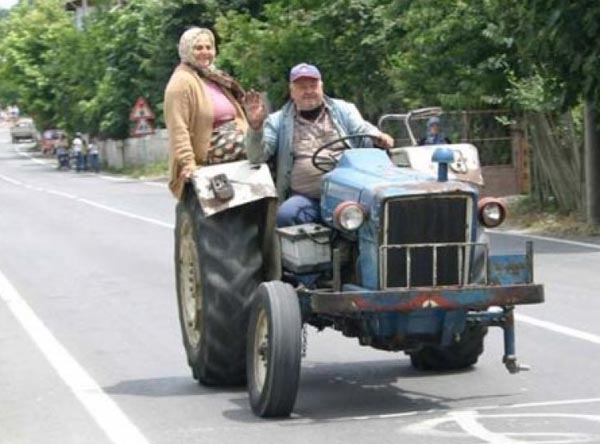 And so the great Ukip saga continues. But, of all the media pieces we have seen recently, one of the more entertaining was published last Monday in the Guardian. It featured the great sage Matthew Goodwin, telling us why "Ukip's scandals" didn't seem to be hurting its popularity.

It took only until the end of the week to show how wrong Goodwin was, with Iain Martin suggesting that there was a "rocky road" ahead in 2015 for the Ukip bandwagon. Interestingly, the piece was closed for comments.

This had come after a torrid rush of adverse publicity, culminating in a decline in the polls and a romp through recent events in the Mail on Sunday. "He's charmed thousands of voters. But after ruinous gaffes, was this the week 'Teflon Nigel' came...UNSTUCK?", the paper asked.

But why "social scientist" Matthew Goodwin should have got it so wrong is not so difficult to understand. He has made the mistake of looking at Ukip as if it was a typical political party, subject to the same influences and constraints as the other parties, instead of what it is - a one-man band in the grip of its increasingly autocratic leader.

In a way, it is an easy mistake to make. Like the tractor illustrated above, if it is viewed from a certain angle, it would appear to be a normal political party. In the case of the tractor, as long as weight is distributed to take account of the missing wheel (as is the case here), it can drive normally – or apparently so.

That is as good a metaphor for Ukip as you will get. Viewed from certain angles, it does look like a normal political party. And, "driven" with care along a straight, flat road, at moderate speed, it is quite capable of making some progress.

But without credible policies and a coherent ideology, it is missing a metaphorical wheel. If the weight shifts, or the road should become rocky, the whole thing will come a cropper. Like the tractor pictured, it will lose momentum and crash to the ground - as indeed it is doing.

A second story in the Mail on Sunday gives another clue as to why this should happen. It tells us that the egregious Kerry Smith – of "poofters" fame - was a protégé of Nigel Farage. But Farage is now accused by members of his own party of "abusing his power" in an attempt to keep him in place as the Ukip PPC for Basildon South.

Normally, Farage would have got away with this – having run the party as his own personal fiefdom for so many years, rigging the selection procedures, and putting his own people in place, their only ideologies being obedience to The Great Leader.

This time, though, his candidate was "dobbed in" by Joanna Cunningham, paid assistant to MEP Tim Aker, the one-time policy guru and aide to renegade Campbell-Bannerman in production of the 2010 train-wreck manifesto that Farage decided so publicly to scrap.

In this instance, we are told that Farage's team knew about Smith's "disgraceful remarks". This, apparently, is why he was fired in the first place. But Farage thought the tape recording would never see the light of day he was put him back on the list. Others thought the public should know the truth.

With this torrent of bad press, Goodwin's lofty assumption about Farage's supposed media skills is also looking rather sad. The Great Leader and his party are certainly getting the coverage, but little of it can be welcome - Farage is not so skilled when it comes to dealing with a hostile media attacking him on points of detail, or about his own conduct. 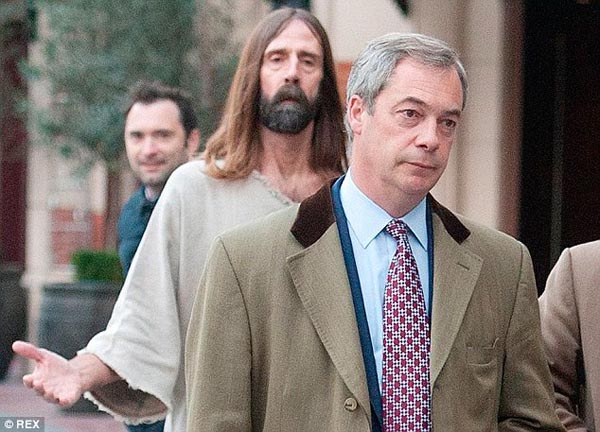 With a party which is said also have been able to exploit social media to great effect, the injunction by party chairman Steve Crowther tells a further story. With members being instructed, after a series of gaffes, to avoid Twitter and Facebook, this actually confirms that it is a party lacking digital skills. Moreover, Ukip is surrendering territory to its own opposition.

Then, contrary to the "cheeky chappie" reputation so assiduously cultivated by Farage, this is also a party suffering a serial sense of humour failure. Its dealings with spoof Twitter accounts have been lamentable, and the failure has been shared by The Great Leader when confronted by a Jesus lookalike. No smiles or boyish grins to be seen here (above). If he'd offered to take "Jesus" for a pint, he could have turned the tables ... but Nigel and his press team don't seem so good in thinking on their feet.

And still it goes on. For its next train wreck, Ukip has been forced to expel Thanet councillor Rozanne Duncan for "jaw dropping" comments made in an as yet unbroadcast TV interview. She has been accused of bringing the party into disrepute, joining an ever-growing list.

For different reasons, Ukip Rotherham could be accused of the same – albeit by accident. Perhaps the charge of incompetence would be fairer, after it allowed a Christmas greeting in the local paper to include the slogan "Say no to the UK!" (below). The paper had made the error, but the proof reading didn't pick it up.

The worst of it all, though, is research by Plymouth University - without the assistance of Matthew Goodwin. It comes to the view that the general election could prove tougher for Ukip than the current opinion polls suggest, and even then that was before the decline in the polling had set in. 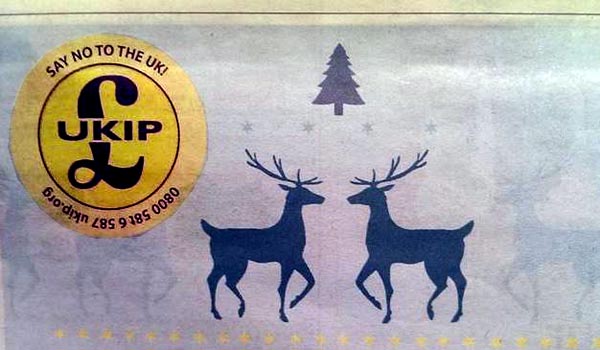 From this, it is concluded that Ukip's supporters are spread too thin over too many constituencies to have a decisive effect, unlike the more concentrated votes of the other parties. By that token, the Lib Dems are likely to do better than the polls suggest, limiting their losses to around 17 seats.

Ukip supporters, it would appear, are less committed than supporters of the three main parties. Indeed, a notably high 15 percent of Ukip voters say they strongly identify with the Conservatives.

Not for nothing does the Mail on Sunday venture that "the hole Nigel Farage is digging grows deeper and deeper", adding that, "he is now impaled on a fork of his own making" - presumably having slipped on the home-made fork he was using for his digging.

Meanwhile, a Survation poll in Scotland gives Ukip a mere four percent of the Scottish vote in the Westminster elections, and 2.2 percent for the Scottish Parliament Constituency vote. One wonders what sort of results we will be seeing in England by the time of the election.