UKIP: and they claim it isn't a cult? 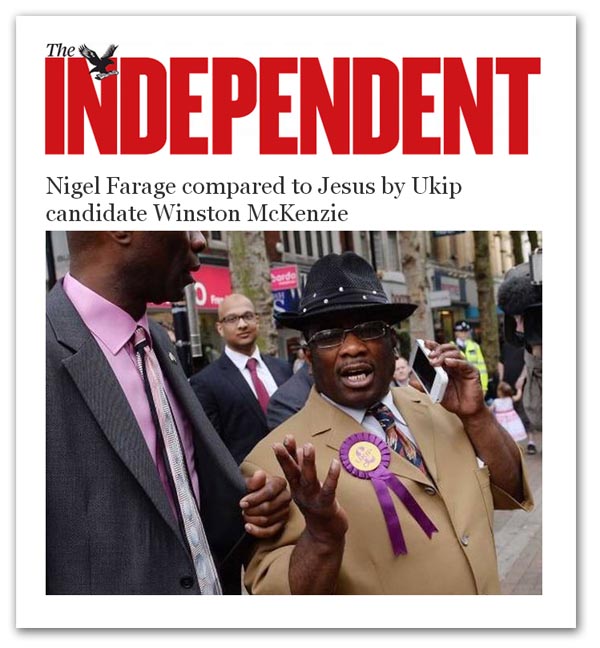 Nigel Farage has been likened to Jesus by Ukip's Commonwealth spokesman, Winston McKenzie. The Eurosceptic "army" was behind their leader, who can "do no wrong".

"Jesus was one man, we're his army. Farage is one man, and we’re his army and that's what it's all about", he says. "Farage is like (non-stick) Teflon – he can do no wrong. Everywhere he goes, it doesn't matter what he says or does - he gets away with it".

McKenzie may be Ukip's "token black" - interesting for a party that supposedly rejects political correctness -  and barking mad with it. But he is an official party spokesman, taken by the media to be representing the party view. On the other hand, this drip-drip of hostile media, may represent a change in tactics – or be an indication that the fourth estate is sensing blood.
For those Ukipites who complain that they are being "picked on", the obvious response is that, if the party didn't generate such unflattering publicity, it wouldn't be available to use. As to whether it is having an effect, we see today a Guardian/ICM poll which puts Ukip on 14 percent, down from the heady heights of 19-20 percent it was getting in October/November.

The latest YouGov poll poll has 16 percent – up from 14 percent over the weekend, but again down from the peaks it was getting earlier. Having gone through Ł2.96 million in the Euro-elections, outspending Labour, if the polls are any guide, Ukip will now need considerably more to succeed in the general election.

With the bad press it is now getting, though, it will take a miracle on a par with the feeding of the five thousand. Perhaps Farage needs to be the Son of God that Winston McKenzie would have him be. He would be advised, though, to stay off the painkillers.