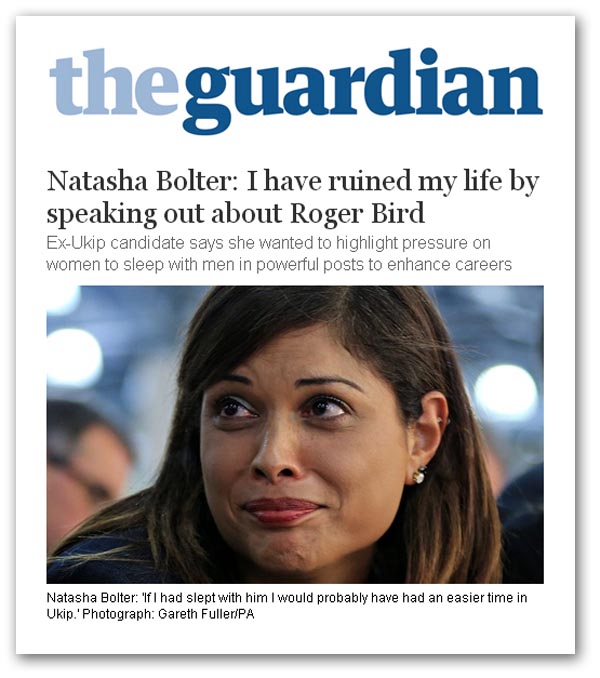 Perceptive readers may notice that, so far, I've kept away from the Bird/Bolter (née Ahmed) soap opera. However, I've now broken my own self-denying ordinance and posted the Guardian's take, conveying the words of UKIP's ex-finest.

"I have ruined my life by speaking out about Roger Bird", says the one of the women in Ukip who is "... seen for our intelligence and aptitude". She then goes on to tell us that "she wanted to highlight pressure on women to sleep with men in powerful posts to enhance careers". One Guardian commenter, though, is not convinced, telling Bolter: "No, you ruined your life by joining Ukip".

Whatever else one might think of the former Miss Ahmed, one notes from the lengthy Mail report that she married at the age of 23. In six years she had five children, now aged nine to 15, and has separated from her husband.

After spending years as a housewife, we are told, she studied to become a teacher, and taught religion at Eastbury Comprehensive School in Barking, becoming active in the Tower Hamlets Labour party until her sudden switch to Ukip just three months ago.

Prior to her marriage, she claims to have read PPE at Wadham College, Oxford, a claim repeated by Roger Bird from the podium at Doncaster, also an Oxford PPE-ist. Then he told the conference: "Now, I was particularly pleased to hear this as it means I am now no longer the only Oxford PPE-ist in Ukip, and Nigel will have to stop making jokes about PPE-ists".

Today, though, a spokesman for the university says that having checked the records against her date of birth and maiden name: "We can confirm that Oxford University has no record of a Natasha Ahmed having attended Oxford". It has also been confirmed that the former Miss Ahmed was not even a teacher, but a "cover supervisor", hired to "babysit" students when teachers were not available, although she has not worked in any school since Spring 2013. And even her age is a lie. She claims 35 but official records show her to be 39.

One wonders, therefore, why that Ukip ever thought this person was a suitable candidate for a Member of Parliament, and is the sort of person who could ably represent her constituents and her party – especially as doubts are now being cast over the rest of her story.

More likely, the former Miss Ahmed "qualified" for exactly the same reason she is receiving inordinate attention from the media, specifically that she doesn't "look a bit Ukip". It seems that Ukip, like the rest of the political parties, is no stranger to the idea of tokenism – or insulting the electorate by putting up what looks to be a serial fantasist.

But now, it emerges, that the focus of the internal investigation in Ukip is on the behaviour of its general secretary over suspicions that he "marked up" the former Miss Ahmed in selection exams. Mr Bird was stepping into forbidden territory – only Mr Farage is allowed to rig the selection process.

Furthermore, it has been learned that she have been thrown out of the Labour Party for failing to pay her membership fees before her high profile "defection" to Ukip. Yet, her apparent defection was hailed as a major coup for Ukip, with her speech on why she chose to leave Labour receiving a rapturous, uncritical reception from Ukip supporters at the Doncaster conference. 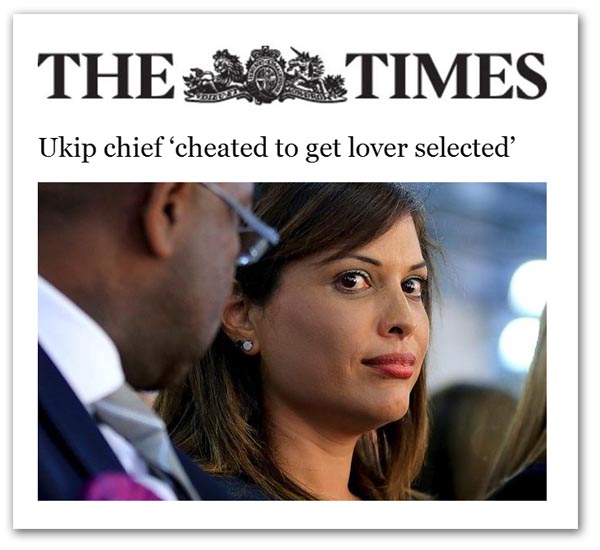 What interests me most, however, is whether the torrent of media coverage is a practical demonstration of this principle, known as the Parkinson law of triviality, or better known as the "bicycle shed syndrome".

The "syndrome" relates to Parkinson's observation of a planning committee reviewing plans for a nuclear power plant. It spent the majority of its time with discussions on relatively trivial and unimportant but easy-to-grasp issues, such as what materials to use for the staff bike-shed, while neglecting the design of the nuclear power plant itself – a far more important but also a far more difficult and complex task to criticise constructively.

Given a choice between exploring many other serious issues, and the trivial tittle-tattle of the former Miss Ahmed's affairs, the difference in column inches appear to tell its own story. But it isn't only journalists who are afflicted - blog readers also seem to be influenced by the syndrome. Compare, for instance, the number of comments here with this.
When it comes to a story such as this, which has extraordinary long-term significance, and this, which should get the coverage? Given a choice, I would say the former, whereas the media have opted for the latter – which deals with the spin off from the former Miss Ahmed – is getting the attention.

However, there are those of my readers who suggest to me that I should make choices, only that I should do the opposite to the media and concentrate on issues such as UNECE and global agreements on tyre standards, and steer clear of the more contentious stuff – like Ukip.

Yet, if my judgement is to be trusted on such details, then it is on matters which affect Ukip's performance, such as Mr Hamilton's expenses, and the decision to parachute him in as a replacement candidate, that it must also be trusted.

The behaviour of the political party which purports to seek our withdrawal from the EU is a legitimate interest for this blog. The events might be trivial but the context is not. A dysfunctional wreck dominating the eurosceptic territory is of concern to us all.

And this is where Parkinson got it wrong. The committee was not failing it its duty in spending time on the bicycle shed. We need well-designed cycle housing as well as well-designed nuclear power stations. Their mistake was in not dealing with the power station as well.

And that's what this blog should be doing – not either or, but both ... and that includes Ukip.