EU regulation: a confusion of responsibilities 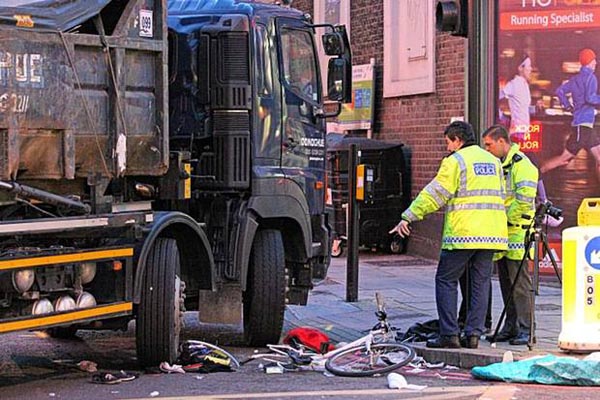 Although they account for just five percent of traffic, lorries are responsible for 15 percent of fatal collisions - around 4,200 in Europe per year - and around half of cyclist deaths in London.

So says The Times today, retailing a set of factoids which are taken out and dusted every now and again, especially by the EU when it is trying to justify more regulation of the transport fleet.

We thus saw in 2011 when the European Parliament tabled a declaration in support of the mandatory fitting of advanced emergency braking systems and lane departure warning systems.

Then, lorries accounted for three percent of traffic, giving rise to 14 percent of fatal collisions and 4,000 deaths. In percentage terms, lorries are killing fewer people. Quantitatively, more people are dying under the wheels of trucks.

The last time we raised this issue though, there was a discussion as to the general responsibility for safety, the extent to which it lay with the drivers and cyclists, and how much safety should be designed in, enforced by regulation.

Very much in the "design" camp is London Mayor Boris Johnson, who has joined with Chris Boardman, the former Olympic champion, and Kate Cairns, the sister of a cyclist killed by a lorry driver in London, to call on the Department for Transport to throw its full support behind measures that could save hundreds of lives each year.

The problem being addressed is the length restriction on different classes of lorries, leading manufacturers to design their vehicles with short, flat-fronted driver cabs, in order to maximise the proportion of load space. This results in cabs with multiple blind-spots and no crumple zones.

Until 1997, regulation on such issues as blind spots was a matter for the EU, but progressively such matters as the fitting of mirrors, vision panels, and other vision aids (such as video cameras) has been a matter for UNECE (United Nations Economic Commission Europe).

Progressively, EU legislation on vehicle design is being repealed and replaced with UNECE Regulations, implemented by EC Regulation 661/2009 under the aegis of Directive 407/2011, applicable since 1 November of this year.

Currently, we are in a transition process, and the state of play is helpfully summed up by our own Department for Transport (DfT), in this bulletin. It lists some of the 50 EU Directives that have been repealed and replaced with UN Regulations covering the same subjects.

However, to add to the confusion, the European Commission tells us that vehicle dimensions (and hence length restrictions) are not covered by UNECE, and remain an EU competence.

Having first checked that they would not contravene any international agreements, therefore, in April last, new EU Regulations on vehicle dimensions were agreed, after considerable delay, with the expectation that trucks conforming to these new dimensions (fitted with "safety cabs") could be expected on the roads by 2018-2020.

Now, it looks as if this is not to be. The thrust of the current Times story is to tell us that, under pressure from companies like Renault and Volvo, the French and Swedish governments are seeking to ban new cab designs until 2025 to avoid disadvantaging firms who have already begun introducing their new truck models for the next decade.

Campaigners are complaining that the UK government has been "sitting on its hands" and failing to mount strong opposition to France and Sweden. But what is of special interest here is that the DfT has said it favours alternative legislation, known as "type approval" to make safety changes.

Should this be the route taken, though, it would have significant implications, taking the regulations out of the hands of the EU and vesting the responsibility in UNECE, which deals with type approval matters.

This, in fact, is simply going with the direction of travel, signalled last year, when the Commission announced that it was steering a reform of the UNECE 1958 Agreement on international vehicle regulations, with a view to getting agreement on a system known as the "International Whole Vehicle Type Approval".

The 1958 Agreement, it says, has not been updated since 1995 and the specific challenges entailed by the accelerating globalisation of the automotive industry and market in the last decades call for a fundamental reform of this Agreement.

Very much under the radar, this process has been going on now for two years, when the Commission declared in its CARS 2020 Action Plan that international harmonisation of vehicle regulations had been a priority for many years.

The EU had taken the view that agreeing common regulations with other major markets around the globe offered the benefit of lower compliance costs, generated economies of scale and reduces technical barriers to trade. The overall objective was to establish the principle of "tested once, admitted everywhere", whilst ensuring the promotion and maintenance of the highest safety and environmental standards.

And, despite high profile initiatives such as TTIP – the EU-US trade agreement - the final CARS21 Report had concluded that the most effective instrument for international regulatory harmonisation was the UNECE 1958 Agreement, "provided it is modernised to accommodate the needs of emerging economies and to the extent that it enables the mutual recognition of international whole vehicle type approvals (IWVTA) starting with the category of passenger cars".

The acceptance of the regulations established under the 1958 Agreement by the EU's trading partners has been recognised as the best way to remove non-tariff barriers to trade.

Furthermore, the Commission avers, in order to enable countries with emerging automotive industries and markets to agree and apply common global standards alongside other major markets around the world, and thus to offer additional benefits of lower compliance costs and economies of scale, the attractiveness and the reliability of the 1958 Agreement needed to be enhanced.

What few people realise is how deeply embedded the EU has become in this process. The Commission has actually taken the leadership of the UNECE task force in charge of preparing the draft proposal for a new Agreement.

The first informal draft was presented to WP.29 – the World Forum on the Harmonisation of Vehicle Regulation - in March 2013 and, in November 2013, a formal document with amending proposals for revision was submitted. Currently, all contracting parties are scrutinising the proposed changes and will provide their feedback at the next session of WP.29 in June 2014.

An informal working group, under the co-chairmanship of the European Commission and Japan, expects to submit final proposals to WP.29, ready for the formal procedure for adoption of the revised Agreement to be launched at the March 2015 session of WP.29 with a view to allowing the Agreement to enter into force in March 2016.

Between them, therefore, Japan and the European Commission are setting the standards for vehicle regulation for the coming decades – an international agreement to which, at some time in the future, it is hoped that the United States will join.

The UK is part of this process, but only as 1/28th of the team that authorises the "common position" guiding the commission negotiators. It hands its voting power to the commission for the final approval of the Agreement, while countries such as Norway and Switzerland (and Japan) will exercise their votes on their own behalf.

For the future though, there will be no confusion about the source of vehicle regulation. It will be made in Geneva, the home of UNECE and WP.29, but with the active participation of the EU, which maintains a substantial office in the city. By the time it gets to Brussels, and placed in front of the European Parliament, that "showcase" of democracy, it will be beyond change.

When cyclists continue to be slaughtered in ever-increasing numbers, Mr Johnson's successor will have to by-pass Brussels and go straight to Geneva to lobby for new or additional laws.

The interesting thing then is that it will not make any difference whether we are in or out of the EU, the destination will be the same. In or out of the EU, the regulations will also be the same, which adds to a further level of caution to our previous piece.
We cannot begin to remove layers of regulation following our withdrawal from the EU, until we have worked out their origin. And where, as is the case here, the law originates in Geneva, it will be around long after the EU treaties are gone.