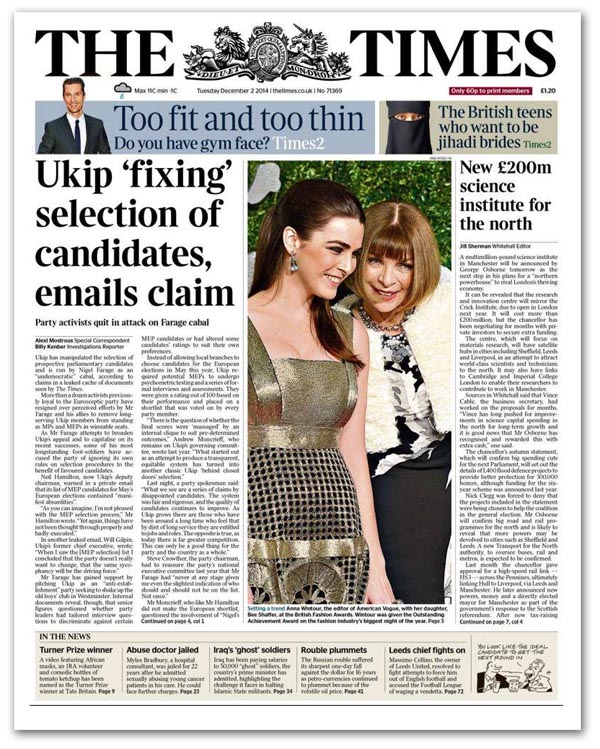 The trouble with doing reviews of Times pieces is that they are behind the paywall, so you can't just link to them and rely on the reader to click-through to get the details, thereby only having to publish the bare bones of the story. You have to post virtually the whole thing, which sometimes means giving more emphasis to a story than it merits.

This would have been the case with this not very important story, albeit on the front page (above). It's about UKIP rigging their own selection procedures for MEP candidates. Fortunately, though, the Independent has run it, which means I don't have to go into the detail.

The reason I needed to mention it at all is to make a quick point, as part of a more general piece about Ukip, correcting what appears to be a standard attack briefing that party supporters use to libel me on comment threads, in a usually forlorn attempt at character assassination.

The claim is made that I resigned the party "before I was pushed", after the election of Godfrey Bloom as Yorkshire Region MEP in 2004. To stop this falsehood spreading it, I have to rebut it. In fact, I resigned in 2003, in protest at the way the selection procedure had been rigged, and the way Farage, with the complicity of David Lott, then party chairman, quite deliberately blocked the appeal which could have set aside this selection and put me in pole position.

It is the case, therefore, that Ukip has been rigging its selection processes for many years, which partly explains why so many of the current batch of MEPs are such dross. Any such assertion from me, though, brings forward the accusation that I hold a "grudge" against The Dear Leader – so it is useful to have the legacy media detail other examples of rigged selection – doubtless because it too has a "grudge".

Actually, no one who knows me would ever suggest that I had such a base relationship with a man with whom I shared a desk for four years, and for whom I wrote speeches. Life is far too short. And even if I had become a Ukip MEP, I would almost certainly have resigned over the embarrassing Kilroy debacle, so the past hasn't been changed that much. Right now, I would still be out on my own.

Rather than a grudge, what I do have is the most profound contempt for Farage – the calm, icy sort. Any passion has long gone. And that's actually a very different thing. Outside the cult, his incompetence, dishonesty and other less than savoury personal attributes do not really support any other view, but above all else, his attempts actively to block policy development have to be the most important reasons for regarding him in such an unfavourable light.

Overall, this "rolling dysfunction" is holding back the party and threatens to bring down the entire anti-EU movement. An example of the immediate effects are picked up by Dr Eric Edmond, a perceptive critic of Ukip and its leader. He links to yet another train-wreck interview, this one with current chairman, Steve Crowther, graphically illustrating the policy chaos that exists within the party.

This is chaos which intensifies by the hour, after Farage disowned a policy on camera, despite it having been minted by deputy leader Nutall at the Doncaster conference in September - of which Farage was apparently unaware. That left him to admit he had "misspoken", after being forced to acknowledge that the policy on sex education remained party policy.

However, frequenting – as one does – the occasional comment thread, I recently had my own personal epiphany, coming to the realisation that Ukip's root problem is that its people don't actually understand what policy is. Even with the benefit of a thoroughly-grounded seminar in the principles of policy-making, I asserted, they wouldn't understand what they were being told, much less be able to put it into practice.

What, in essence, the party is producing is a list of aspirations rather than policies. The core failure is the lack of any connection between what they want to happen, and the means of making those things happen, in such a way that one can be assured that the outcomes are deliverable. This confusion between aspiration and policy means that the party can never progress to a state of coherence.

Party supporters, on the other hand (and not entirely unreasonably), point to the similar inadequacies of the established parties. But this simply highlights the further failure to understand the nature of politics. It is for the challengers, with no track record, to demonstrate their capabilities. Conventionally, this is done through the mechanism of policy statements – something which Ukip has so far failed to do.

Over the months to come, this failing will become increasingly evident, as Mr Cameron unveils his "play", with which he seeks to undermine and eventually destroy the upstart. Putting together a series of technical measures, complete with some theatrical contrast provided by apparently obstructive Poles, he will attempt to do this by delivering a policy which shows that he has the potential to control immigration from within the EU.

On the other hand, Ukip – despite making immigration its core issue, eliding it with its anti-EU sentiment – has failed yet to deliver a credible (or any) policy on how it would control immigration from outwith the EU.

It has failed in this context to realise that "controlling our borders" is not a policy, per se, but an aspiration – and a wholly unrealistic one at that. As long as the UK admits 34 million visitors to this country each year – the majority without visas – it has effectively ceded perimeter control, the system then relying on other layers and stratagems.

Nor indeed does it help having Ukip telling us that: "We will extend to EU citizens the existing points-based system for time-limited work permits". That does not begin to constitute a policy. Nor even is it, in itself, a component of a policy.

To have the makings of a policy, the statement would have to be directed to, and linked with, a specific objective or outcome. It would then have to be couched in such terms as to make it clear that it could contribute to the declared objective – whatever that might be. Any system or process, as such, is blind – and has as much a capability to obstruct as support any particular policy line.

But where the real policy wonks play is in co-ordination – the thing known more commonly as "joined up policy". The "perfect" policy is one thing, but can get a little bit raggy when you have to take other considerations into account. For instance, you might well come up with the best in highly-polished defence policies, only to have it fall apart when your foreign policy delivers you enemies you didn't want, didn't expect and can't fight - a bit like UK policy really.

Here, the rank amateurism of Ukip comes to the fore, best evident when one reads that: "UKIP would not seek to remain in the European Free Trade Area (EFTA) or European Economic Area (EEA) while those treaties maintain a principle of free movement of labour, which prevents the UK managing its own borders".

Now here one must recall that Ukip hasn't actually declared what it is trying to achieve, and we also know that "managing" borders is not a policy as such, but a process. So we end up with a political party that is prepared to ditch a proven and workable trade relationship because it interrupts an indeterminate process aimed at producing an undefined effect, with no specified outcome.

In this event, we are open to the suggestion that Ukip may be well-motivated and be seeking a desirable outcome. But since the party has neither defined its preferred outcome nor any credible means by which it might achieve it, we can be excused from accepting that it has any policies.

Meanwhile, we can see Mr Cameron's policy being rolled out, the overall objective undeclared but loosely translated as "stuff Ukip". Helping in this noble endeavour are his allies who are talking down immigration. They are also rubbishing the "Norway option", something they have in common with Ukip – which must tell you something.

Meanwhile, we have the entertaining prospect of theatrical Poles, providing the backcloth for Mr Cameron's stunning victory to come. The harder he has to battle, the better and more convincing he will look.

If Ukip had policies, of course, it would be easier to assess Mr Cameron's games, by reference to what Ukip had on offer. One would simply compare what is with what could be. That's the way politics is supposed to work. Poor Ukip, though, hasn't discovered this yet - and Farage never will. If his party grows up, things might be different but, for the moment, contempt seems in order for the Peter Pan of politics.