EU exit: a new ball game in the making? 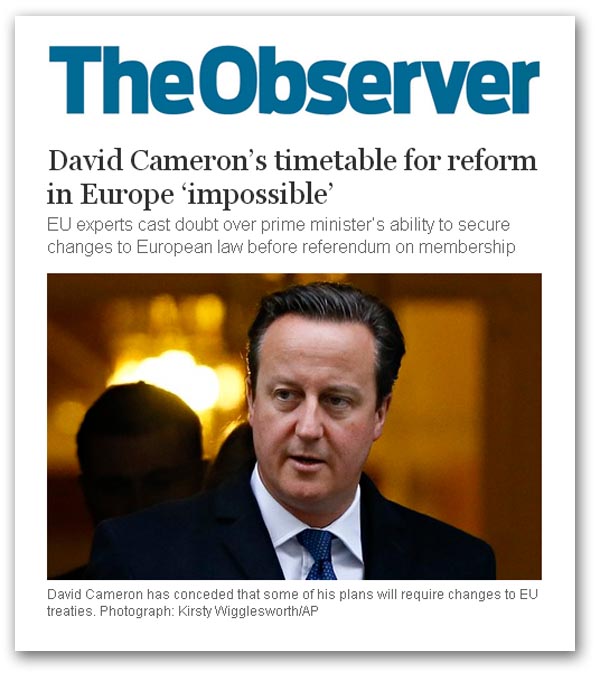 An interesting day yesterday included guarding the comment threat on the Paterson piece. If the Ukip claque takes over, a thread can quickly turn into an undisciplined mess. But it looks as if an active, aggressive presence, making its mark early on, can keep the bullies at bay.

Before even the day had settled, though, we were looking at a report from The Observer (illustrated above) which had "experts" casting doubt over Mr Cameron's ability to secure changes to European law before the 2017 referendum.

With a whole list of "experts" supporting this thesis, we then had The Sunday Times telling us that Mr Cameron had been warned that he would have "written his own death warrant" as Tory leader if he fails to win a majority at next year's election after "ditching plans to bring in quotas on European Union migrants".
has cas
Then, as we learned that "senior backbenchers" were expecting a meeting with Cameron to urge him to make tough demands of Brussels in areas such as EU law, Business for Britain's Matthew Elliott demonstrated why he can never be taken as a serious player.

Says Elliott, "If we're opening up the treaties, the prime minister should be far more ambitious in the changes that he seeks". In one fell swoop, he goes against the grain of received opinion, without beginning to understand that what he proposes is beyond mere impossible and lies in the realms of fantasy.

In the real world, however, Owen Paterson had been talking to Sky's Murnaghan, an interview picked up later by the Guardian.

This had the former environment secretary casting doubt on David Cameron's ability to deliver EU-wide immigration reforms. It looked, said Paterson, as if the government had been "sat on by the Germans" and complained that relying on an EU renegotiation to address the immigration issue could take too long.

Suggesting that Cameron was right to say that a balance needed to be struck on immigration, he said that Cameron also had to deliver on what he had proposed.

"That is where I think we possibly part company because he's looking to negotiate within the existing arrangements and it looks as if we've already been sat on by the Germans", said Paterson, referring to claims – denied by Philip Hammond - that Cameron had abandoned plans to propose a quota on EU migration under pressure from Angela Merkel.

Getting treaty change would take too long. This was "a real pressing problem", Paterson said. "We cannot go into long, rambling negotiations with the European Union, particularly if they're not going to play ball".

The Guardian was quick to exploit this sense of crisis by referring to an earlier Independent on Sunday report. It "revealed" that Bill Cash had been claiming that 200 Conservative MPs wanted to swap EU membership for a free trade agreement.

All that was against a background of Mr Cameron apparently wanting to shut down the immigration issue rather than talking it up. It was "never going to be a selling point" for the Tories in the general election and the best they could hope for now was to stop "haemorrhaging" votes to Ukip.

One serious clue as to what has been going on, though, is that the Prime Minister's chief of staff, Ed Llewellyn, an "old Brussels hand", took charge of writing the immigration speech. This suggests that there is a guiding mind behind the "simplified procedure" target, and a serious intent.

Nevertheless, what is particularly interesting about developments is the way the focus is shifting. Ukip may be the spectre at the feast, but the running situation is being portrayed as a battle between Mr Cameron and his backbenchers, with Owen Paterson providing an alternative centre of gravity.

That much indeed has changed. Gone are the days when the choice is between the Cameron emptiness and the Ukip vacuum. There is a new force emerging, which is putting clothes on a new paradigm, one which is plausible and practical - leaving Ukip out in the cold as a bit-player.

This, interestingly, is what Andrew Stuttaford sees, in National Review Online. Having understood the point of the Paterson speech, in defining the "how" as being as important as the "why", he demonstrates himself to be a serious player.

It is too early yet to tell how the Paterson paradigm will play out, but if the message does take root that Mr Cameron can't deliver, we're in a whole new ball game.