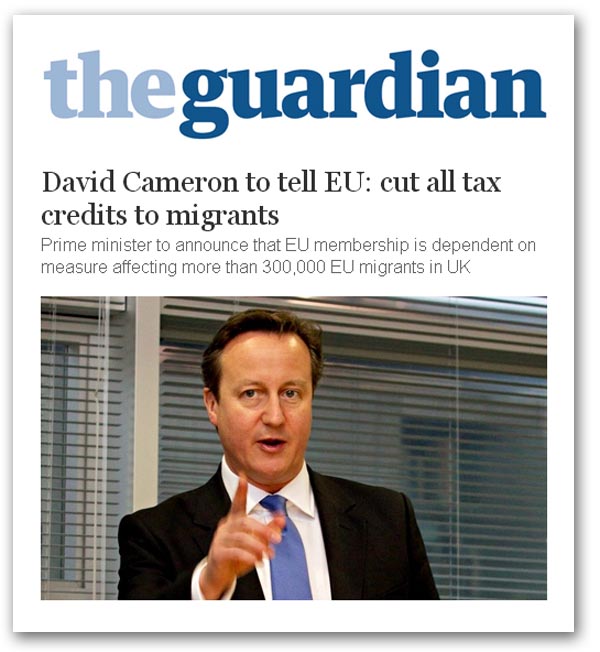 Entering what he may feel is the last chance saloon, in his bid to stave off a defeat in any EU referendum (and salvage the general election), Mr Cameron has today delivered his much-trailed speech on immigration.

Earlier, it had been previewed in the Guardian and elsewhere, from which we learned that the Prime Minister intended to negotiate a cut to EU migration and "make welfare reform an absolute requirement in renegotiation".

This is to be a central part of his renegotiation package with the EU, aimed at removing the financial incentives that attract migrants to Britain – effectively weakening the "pull" factors that attract workers and their families from EU member states.

EU jobseekers will not be supported by UK taxpayers; and they will be removed if they are not in a job within six months.

Cameron says that, together with other measures, this will deliver the toughest system on welfare for EU migrants anywhere in Europe. It will, he says, return free movement to a more sensible basis – the position before a European Court judgement in 1991 when Member States had the right to expect workers to have a job offer before they arrived - and a return to rules put in place by Margaret Thatcher in the 1980s.

The "other measures" will include the abolition of the system where EU migrants can bring family members from outside the EU without any restrictions. There will be tougher and longer re-entry bans for rough sleepers, beggars and fraudsters, and there will be stronger arrangements for deporting EU criminals and stopping them coming back.

Furthermore, there will be no access to labour market for nationals of new Member States joining the EU until their economies have converged more closely with current members.

The Prime Minister is to argue that these changes should apply to the whole of the EU, but should that not prove possible, he would negotiate them in a UK-only settlement. He will then reiterate his determination to secure "reform" and will make it clear that, "if the concerns of the British public fall on deaf ears", then "he rules nothing out".

"People", he will say, "want Government to have control over the numbers of people coming here and the circumstances in which they come, both from around the world and from within the European Union".

In recent years", he will add, "it has become clear that successive Governments have lacked control. People want grip. I get that…They don’t want limitless immigration and they don't want no immigration. They want controlled immigration. And they are right".

Setting out the framework, he will then say that Britain supports the principle of freedom of movement of workers and accepting that principle is a key to being part of the single market.

Thus, he says, we do not want to destroy that principle or turn it on its head. But freedom of movement has never been an unqualified right, and we now need to allow it to operate on a more sustainable basis in the light of the experience of recent years. His objective is "simple". He intends to make our immigration "system fairer and reduce the current exceptionally high level of migration from within the EU into the UK".

Looking at this in the round, some of this is already possible without treaty change, or even additional EU legislation. As we indicated earlier, these are measures that largely conform with the judgement on the Dano case, to the effect that freedom of movement is a "qualified and limited" right. For those specific issues, the renegotiation idea is a sham – we don't need it. With the necessary enforcement and administrative resources, the UK could probably go ahead straight away.
However, for other issues - such as removal of rights to bring in family members from outside the EU, treaty change and withdrawal from the ECHR will be needed. On that basis, Cameron will not be able to achieve success in this area.

What was also expected but is missing from the speech is a call for the right to apply a "temporary emergency brake" on free movement of workers if a country is being overwhelmed by EU migrants. The Guardian suggests that this absence will "disappoint Eurosceptics" who have become doubtful that fiscal disincentives will be enough. It "will prompt the Ukip leader, Nigel Farage, to argue that Britain will only regain control of its borders if it leaves the EU".

Fortunately, that "emergency brake" provision does exist within the EEA agreement, where there is a fallback position: Articles 112-3 are what comprise the "Safeguard Measures" which permit the parties unilaterally to take "appropriate measures" if serious economic, societal or environmental difficulties of a sectoral or regional nature arise and are liable to persist".

This puts EEA supporters in a powerful position. Mr Cameron is to argue that the measures he proposes are sufficient to control immigration within the EU. But more is available outside the EU, within the EEA. The improvement in the position effectively shoots the fox of the naysayers. And that is without ceding from the ECHR – which would be necessary to restrict rights of dependants and asylum seekers.

The total package applied to the EEA - plus the add-ons – would, however, shoot the Farage fox, provided certain other "pull" factors were dealt with – such as the use of private accommodation at cut rates made possible by the illegal overcrowding of rooms. There is no appetite for a total ban on immigration, and the totality of controls will be sufficient to satisfy most reasonable people that immigration can be brought under control.

To a very great extent, therefore, Mr Cameron has given the "Norway option" a huge boost. Nobody can say that the EEA provisions are inadequate, while at the same time arguing that controls within the EU are sufficient. We have them over the proverbial barrel.