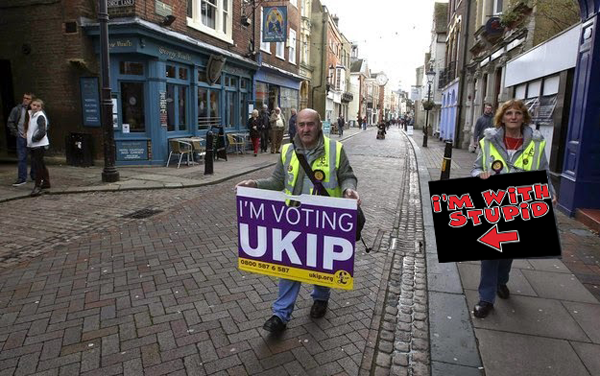 The fun started when ITV's Meridian asked Mark Reckless what would happen to EU migrants already living and working in Britain if the UK chose to leave the EU in a future referendum. His answers made it to the front page of the Telegraph and most of the other legacy media, after his comments were interpreted as an intention to deport EU migrants once we had left the EU.

Complete Bastard rightly posits that this is what happens when a political party goes public without having worked out its policies in advance. Then, without an established "line to take" and message discipline, it is easy for a motor-mouth candidate like Reckless to go off the rails – as he did with Libya, making unforced errors which then dominate the headlines.

And this really is UKIP's problem which, compounded by the profound ignorance displayed by spokespeople and candidates alike, means that they are constantly suffering from foot-in-mouth disease.

From the outset, the very idea of repatriating migrants who had exercised their rights of freedom of movement or establishment, under the EU treaties, is a clear breach of the international law doctrine of "acquired rights".

This is dealt with admirably in a Parliamentary briefing note and is so well established - having been formally evaluated by the International Law Commission in 1959 – that it has now taken on the status of customary law.

No one who had made any serious attempt to inform themselves of the state of art could possibly have made such fools of themselves. It is the rank amateurism of the man that rankles– a man at the cutting edge of the debate who is so ill-informed that he can offer in the name of his party a clear breach of international law as a serious policy suggestion.

Only later, via the Guardian, amongst others, do we get the official line from a "Ukip spokesman", disowning their own candidate, having to admit on the eve of the Rochester by-election that the 2.8million EU nationals living and working in Britain would be given the right to stay in the UK after an EU exit.

"Ukip's position on migration is entirely clear", says the spokesman. "We need to sort out our borders, and we cannot do so whilst we remain in the European Union. Those who are in this country lawfully, such as those from EU nations, would have the right to remain".

However, even now, Reckless doesn't seem to have a grip on the issue, apparently saying that people already in Britain "would be issued with work permits and nobody would be deported". Thereby, he seems unaware that even issuing "permits" would be a breach of law, making an absolute "right" conditional on an administrative procedure.

That brought Farage into play, telling the BBC, "When we invoke Article 50 of the Lisbon Treaty which sets us off on a two-year negotiation to leave the EU, part of that renegotiations is what happens to retired people from Britain living on the Costa del Sol and what happens to people from Warsaw living in London".

"Let me make this clear", he added, "during our divorce negotiations, even if the EU was to behave badly and say [British] people living in Spain were to be threatened with not being there, we would maintain the line that we believe in the rule of law, we believe in British justice and we believe that anyone who has come to Britain legally has the right to remain".

Nevertheless, this does not even begin to address the fatuity of the broader Ukip response. The ritualistic offering that we cannot "sort out our borders" whilst we remain in the EU is getting to sound a little tired, although none of the media seem to asking whether leaving the EU, per se would be enough to solve the problem.

This is the distinction between necessary and sufficient, with Ukip failing to appreciate the difference. On the other hand, implementing controls already permitted by EU law, addressing ECHR issues, dealing with drivers of migration, in terms of reducing "push" and "pull" factors, and then improving the lamentably poor administration of migration control, would doubtless yield greater dividends than the incoherence of a party which, to this day, can't even get its act together on an EU exit plan.

The point, of course, is that dealing with immigration in a post-EU Britain demands a considered policy response. So far, all UKIP have been able to do is play around with the idea of an Australian points-based quota system.

This, as an intelligent policy response, does not qualify. Britain is so different is so many ways from Australia that only a leap of imagination into the abyss could suggest it is of any utility. This country with its larger, more diverse economy, on the edge of a continental land mass, demands an entirely different response to a huge, under-populated land mass. Not least, this country has to deal with nearly 33 million visitors, against Australia's seven million, the greater number making the tracking of illegal immigrants that much harder.

All that UKIP has managed to achieve from this imbroglio, therefore, is to tell the voters that there is nothing it can do about the migrants already in place, with nothing to suggest that they know how to deal with migrants yet to come.

Unsurprisingly, therefore, the controversy lasted long enough for the BBC evening news remarking on the 6pm news that the policy gap is showing once more. But then, as Complete Bastard points out, this is UKIP. The only way there isn't going to be a policy gap is to rebuild the party from scratch.