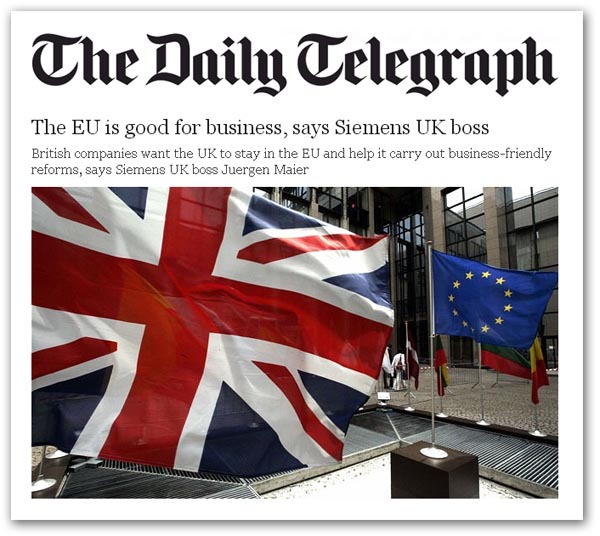 When confronting our so-called "captains of industry" speaking about the merits or otherwise of the European Union, we have to deal with the possibility that many of them are either rather ignorant, or they think we are and are lying through their teeth to us.

We got this with Stephen Odell, CEO of Ford Europe. In July last year, he was bitching about EU regulation, apparently oblivious to the fact that most of the regulation affecting his sector came not from the EU but from the World Forum on Vehicle Harmonisation, hosted by UNECE.

Nevertheless, the Europhiles and the EU-supporting media keep trotting out such people, but whether it is Open Europe, the CER or the CBI, it is always a similar message based on the same profound misrepresentation of reality.

This time, though, it is the Telegraph, giving space to Juergen Maier, chief executive of Siemens UK and advisory board member of Business for New Europe. It is he, representing a company not known for its probity - a company that had to hire a firm of lawyers to investigate its own the web of corruption - who is stepping up to the plate with the usual diet of tosh, half-truths and downright lies.

As always with these people, he fails to make the distinction between EU and EEA membership, thus asserting that there is "a pretty wide consensus in business ģ such as the belief that the EU delivers very significant value to the UK economy".

This, however, is just one building block in what is quite evidently developing into a political argument, for Mr Maier goes on to concede that this EU "does not work as well as it could and needs to be reformed".

Then, with a degree of understatement normally reserved for the British, he introduced a note of pretend balance, telling us that, "there is some disagreement over how that reform is to be achieved, with one school of thought advocating a referendum".

That referendum, he says, "may or may not happen, at a date yet to be decided upon, with a choice between two unknown options". And this, the poor darling bleats, "is profoundly worrying for business leaders".

The "worried" Mr Maier then sits back and observes that the EU "will certainly change over the next few years", and then complains that "we have not been provided with any details at all about what our relationship with our largest market would be in the event of an 'out' vote".

The thing is, a company the size of Siemens, with its huge resources ¢ a Ż3.6bn turnover and 14,000 employees in the UK ¢ could very easily make some informed guesses. But that isn't Mr Maier's game. He wants to bitch about "uncertainty".

As we blink back the tears over the plight of this poor man, we are assailed by concern for his beleaguered "business persons". These poor people need "... to know what conditions they will have to operate in". As if this was the unique prerogative of these precious persons, he then tells us, "Businesses need clarity".
For all that, Mr Maier offers a little bit of sense ¢ in a limited way. "The benefits of remaining in the EU are often overlooked", he says. "Take regulation. We all know that new regulations and directives coming from Brussels cause squeals of anguish from some corners in the UK".

"But", he continues, "the fact is that EU regulation almost always involves replacing 28 national sets of standards with one, Continent-wide standard. This means British exporters only have to comply with one set of rules ¢ hardly an example of suffocating red tape. This is a boon to business, not a burden".

As we absorb this, and ponder the sense in it, we wonder if Mr Maier is being deliberately obtuse.  I sometime wonder whether being thick is a necessary qualification for being a "captain of industry".
This is a man who is happy to argue about the advantages of selling to a market of 500m consumers "without worrying about complying with 28 different reels of red tape". Yet Siemens is a global company selling to over a hundred countries. What is good for 28 countries, therefore, has to be better for four times as many countries. Companies such as Siemens don't just need to satisfy Europe. They need global standards.

No more so is this necessary than in the car industry and, sure enough, Mr Maier tells us to: "Take the car industry". Well, let's take the car industry. "There are 2,350 businesses in our automotive supply chain", says Maier. These are dependent for their prosperity on foreign-owned car manufacturers, half of whose exports go to the EU.

At Siemens, Mr Maier's wonks have calculated that 25,000 jobs in the supply chain are dependant on UK operations, many of which are in small or medium-sized British businesses that often export to the EU through this company.

But what this deceitful little man does not tell us is that the regulatory system depends on Directive 2007/45/EC, EU law on the face of it, but only on the face of it. This Directive actually "establishes a framework for the approval of motor vehicles and their trailers, and of systems, components and separate technical units intended for such vehicles". Leaping then to Recital 11, we see:

Consequently, United Nations Economic Commission for Europe (UNECE) Regulations to which the Community accedes, in application of that Decision, and amendments to UNECE Regulations to which the Community has already acceded should be incorporated within the Community type-approval procedure either as requirements for EC vehicle type-approval, or as alternatives to existing Community law. In particular, where the Community decides, by means of a Council decision, that a UNECE regulation shall become part of the EC vehicle type approval procedure and replace existing Community law the Commission should be empowered to make the necessary adaptations to this Directive.

What this little gem tells us is that the regulator of record is UNECE, not the EU. Mr Maier's car industry needs global regulation and, within the limitations of that system, is getting it. And Norway is part of the body that makes the law. When it has helped decide what the standards are, they are faxed (or e-mailed) to Brussels, for processing under 2007/45/EC.

"It is perturbing that those who claim that Britain would be better off out have not put forward a detailed alternative for what 'out' means", Maier now says. We have, of course, but the likes of Maier don't trouble themselves with detail, or look round them to see what is on offer. They prefer their lies.

"The average Norwegian pays more than half of what the average Briton pays for access to the Single Market, and is ruled by a 'fax democracy' where the government must implement regulations it had no say in", this liar says.

Reviewing the actual EFTA budget, the sum attributed to "EEA related activities" is Ć8,145,000. That is the membership contribution, out of the Ć22,369,000 total EFTA budget, of which Norway pays just over half (55.35 percent). In effect. Noway pays about Ć5 million a year for single market access.

However, after clogging us with his lies, Maier insists that "businesses can only make an informed choice if they are presented with a vision of what Britain would look like outside the EU". "This worrying lack of clarity from Eurosceptics", he adds, "combined with a growing realisation about the risks of leaving, means that I believe the voices of businesses large and small shall begin to be heard".

Then says the man, "the majority of them will be singing the same tune ¢ that Britain will be better off staying in the EU and leading the Continent in carrying out the reforms that business needs to see".

But this is a total non-sequitur. Mr Maier is getting his pound of [regulatory] flesh. Businesses have nothing to fear from leaving the EU. The "lack of clarity" is largely self-induced, brought on by obfuscation and mendacity by a man who should know better.

We should also get better from the likes of the Telegraph as well though, but we are not going to get anything from that quarter, any more than we are from Mr Siemens.

And this is where we have our own political point to make. To deal with the lying likes of Siemens, we need some serious heavy lifting, the sort of that the UKIP millions and its media access can give.

Instead of serious effort, though, we're getting this sort of garbage, while the party is preening itself over the result to come in Rochester and Strood.

Yet the battle to come is not going to be fought in high-profile by-elections but in a referendum. There, unless we defeat it in detail, the "lack of clarity" that the likes of the lying Mr Maier are so keen to disseminate will exert a powerful effect and we will lose the fight.