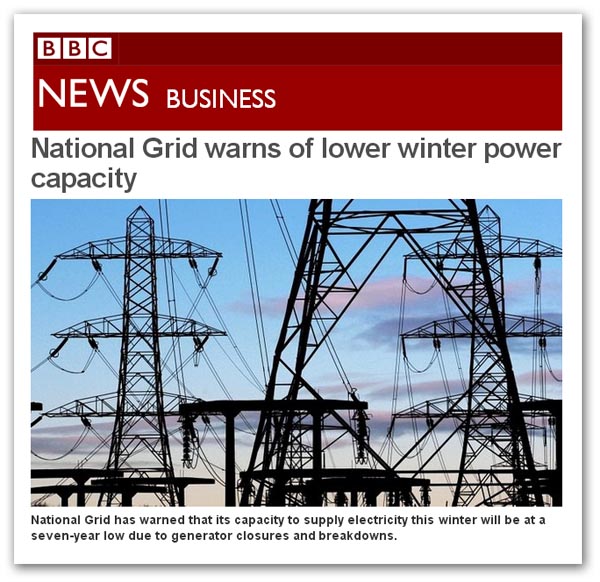 I suppose that, if the BBC was retailing something that no one wanted to hear, it would be accused in some quarters of "bias". But when this report, and others, such as from The Guardian and the Telegraph all tell roughly the same story, those who feel so inclined rush to believe what they want to believe - that we are close to suffering blackouts this winter .

The essence of the story, as retailed by the media, is that the National Grid has warned that its capacity to supply electricity this winter will be at a seven-year low due to generator closures and breakdowns. Spare electricity capacity, we are told, which ran at about five percent over the winter months last year, will be nearer four percent this year. And this compares with 17 percent three years ago.

Why this news is so welcome to some, I would hazard, is that there is a constituency which wants the system to fail, simply to demonstrate the failure of the green-driven energy policy. This is perhaps typified by this Bishop Hillite comment:

Personally I'm hoping for a few powercuts hitting London. Sorry London, but if you are affected the media are far more interested than if it happens in Bradford or Bristol. Only if this happens might MPs start to look at what their policies have done.

But while one can sympathise with the general sentiment, it actually looks as if the doom-mongers are crying "wolf!" – in the short-term at least. The quadruped is still over the horizon - as Booker pointed out last year.

Despite this, the short-term power cut narrative has become firmly lodged in the media, which means that the current reports bear no relation to the reality and in no way do the headlines reflect what the National Grid is trying to say.

To get the full picture, one has to venture past the press releases and lurid headlines, and look at the full 66-page Winter Outlook Report. This tells anyone interested enough to find out exactly what the situation is.

First of all, despite the media stressing that the mid-winter peak demand could hit 55GW, with a capacity available of 58.2GW – hence bringing the margin down to its slender level – this figures are based on a series of assumptions which make the declared margin an impossibly pessimistic worst case scenario.

Looking at the actual report then, we find that the mid-winter generation capacity is assumed to be 71.2GW while the forecast peak electricity demand  is 53.6GW. Therefore, the expected margin is actually 17.6GW. However, what the Grid is doing is, for planning purposes, it is creating a worse-case scenario.
Thus, to be on the safe side, it creates a pessimistic demand scenario, using a more arduous "Average Cold Spell" (ACS) electricity demand assumtion. This, the Grid says, has a 50 percent chance of being exceeded, bringing peak demand to a notional 55.0GW.  On the supply side, the assumed capacity of 71.2GW is then purposefully de-rated, to take into account availability and historic performance of the plant declared available.

So cautious is this estimate that, even though we have interconnectors from France and Holland (plus Ireland) capable of supplying 3.7GW, the assumption is that we are able to import only 750MW, while exporting rather than importing a full 3GW through the remaining interconnectors. Typically, though, we tend to import 3GW.

By this means, we end up with the 58.2GW, which really is a worst case scenario. But this is not a figure which represents any expected real-life situation. It is a working figure, used for margin analysis, from which is calculated the "operational de-rated margin" of 4.1 percent across the winter - the headline figure that the media have used.

This figure, though, is not a forecast. It is used simply as the basis for reserve planning, and even then it is not the base figure. This margin does not take into account Demand Side Balancing Reserve (DSBR) or Supplementary Balancing Reserve (SBR), two new balancing services which collectively increase the de-rated margin to 6.1 percent. That is the true figure, not the 4.1 figure quoted in the media, taking account of real additional capacity.

As an indication of how relaxed the National Grid is about the supply situation, it has taken a mere 319MW as DSBR and, of the 5.4GW bids it received for SBR (bringing back redundant and mothballed plants back into service), it contracted only 1.1GW. And even then, the 6.1 percent margin remains the figure for planning the additional  short-term reserve requirement.

The reserve itself includes STOR and, from the 3GW available last year, 3.5GW is contracted for this winter – a capacity in excess of that expected from Hinckley C. To this is added another 1.9 GW (approximately) of frequency response reserve – up a full GW from last year. On top of that, there is the "maximum generation" emergency reserve of 740MW.

All of this adds up a total reserve of about 7.5GW, which includes about 5GW of operating reserve, and an expected overall gap of about 25GW between the likely peaks and the possibility of a blackout.
The way the system works is that predictable problems (such as wind dropping out of the system) are accommodated by the de-rated margin process. That leaves the net (de-rated) margin and the operational reserve to cope with the unexpected: the unusual peak demands and plant breakdowns or other outages (grid failures, etc). This "hidden reserve" is more than enough to protect the system and prevent failure, yet the media acts as if its doesn't exist.
Nevertheless, we have Cordi O'Hara, Director of Market Operation, National Grid, in the actual report, telling us that the NG report is not a prediction of what could or will happen. Based on the work done, she says, "it's clear the country has the ability to meet its energy needs".

On this, Ofgem concurs. Rachel Fletcher, Ofgem's senior partner for markets, says: "The message … is that there is no increased risk of blackouts", adding to industry sources which are offering the same message.

In other words, there are substantial reserves in the system, giving it far more resilience that the media allow. Despite the wishes of the doom-mongers, it is extremely unlikely that we will see any power cuts this winter. But that is not the game the media wants to play. The narrative requires that the public is misled, and misled it shall be, fortified by those who willingly believe the fiction.