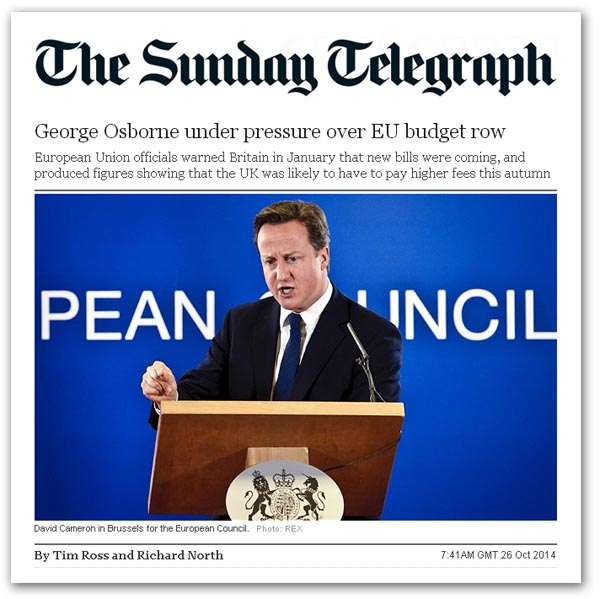 Something of the story behind the story on Mr Cameron's Ł1.7bn began to emerge in the Sunday Telegraph yesterday, with lead writer Tim Ross kindly adding my by-line to the copy. The Mail on Sunday, however, went for a fictional version of events, going for Mr Gove's incredible theory that the Barroso personally dumped a Ł1.7 bill on the UK as an act of revenge.

The Financial Times though, is coming up with a completely different version of events. The Ł1.7bn figure, it tells us, is a one-off payment which accounts for less than 0.1 percent of UK GNI, representing a top-up to UK contributions covering 11 years. Thus, the paper says, Britain is being asked to pay a "modest" adjustment of an extra Ł150m a year over the period, a sum that would barely deserve a footnote in the UK's annual accounts.

Now, the Mail is saying much the same thing, that "the European Commission issued the demand to the UK after using rules dating back to 1995 and finding Britain's economy has grown faster than expected, so must pay a greater share to Brussels".

This, one assumes, is based on the Commission Q&A on the revision of Member States's GNI, which I only saw last night. Contradicting completely my report on the application of ESA 2010, it states that this year's technical adjustment does NOT take into account the new method of calculating member states' GNIs. This new method, it says, will have no impact on their GNI contributions to the EU budget until the new own resources decision comes into effect, which is probably 2016.

To the question of why this year's technical adjustment sees such big increases of contributions to the EU budget for some member states, the Commission tells us that this year's adjustment includes GNI re-calculation dating back to 2002 for most member states and to 1995 for one.

There were, we are told, a number of unresolved issues that had accumulated over the last years. The decision to resolve these historic issues now results from a joint effort of member states in cooperation with Eurostat. With all these issues now cleared, future such corrections will again be rather minor, as they were in recent years.
This seems to be borne out by sight of an (undated) information note to member states, which sets out the sums involved, on which much of the media publicity has been based. It sets out in detail the adjustments for the different members states for the years 1995-2013.

As to the legal authority to apply retrospective adjustments, the Commission cites Council Regulation No 1150/2000 of 22 May 2000 implementing Decision 94/728/EC on the system of the Communities' own resources. It would seem that Article 10(8) applies, referring to Article 3(2) of Directive 89/130/EEC on the harmonization of the compilation of gross national product at market prices.

There is nevertheless something very odd about the Commission Q&A, because it cites Council Decision 2007/436/EC on the system of the European Communities' own resources, as being the basis for calculating the Members' contributions. Yet, as we see here, that Decision has been repealed and replaced by Council Decision 2014/335/EU on the system of own resources of the European Union. It takes effect from 1 January of this year.

The crucial thing about this updated Decsion is that it tells us that Member States' GNIs "shall mean an annual GNI at market price, as provided by the Commission in application of Regulation (EU) No 549/2013 (ESA 2010)" - thereby installing the new European System of Accounts, except that pro temp contributions were to be based on ESA 95 because ESA 2010 had not been available at the time of the adoption of the 2013 Decision.

But, the Decision went on, "the contributions should be adapted as soon as all Member States have transmitted their data on the basis of ESA 2010". "In the event that there are any amendments to ESA 2010 which entail a significant change in the level of GNI", it then said, "the ceilings for own resources and for commitment appropriations should be adapted again". A method of recalculation was then set out.

On this basis, it would appear that the Commission is wrong in claiming that ESA 2010 does not apply. Its own legislation says it does, and unless there is an unknown factor here, the new standard applies to the current figures and the adjustments.

Therefore, what I think has happened is that, guided by Directive 89/130/EEC and Decision 2014/335, the UK and other Member States have revised their GNIs retrospectively using ESA 2010, which has given rise to the adjustments recorded. But it must also be remembered that the procedure requires Member States to calculate their own GNIs, and send the results to the Commission. This is not something the Commission does for us – we do it for ourselves.

Thus, as far as the awareness and the advance notice goes, my previous report would seem to be accurate (unless or until we see further developments).  The UK was informed that changes were in progress. It is unlikely that Mr Cameron can claim that the Commissions was not entitled to the money it is claiming, as the sum is based on data provided by the UK – presumably calculated by the ONS - in accordance with well-established procedures.

Since the ESA 2010 changes have been flagged up continuously, the UK government – and therefore Mr Cameron – can have no justification for saying they didn't know what was coming.

Seldom though have I met a more complex scenario – where the Commission also seems to be getting it wrong. Even Mr Barroso didn't seem to know what was going on. And that may just provide a small window of opportunity for Mr Cameron. It the Commission itself is all at sea, he could claim that it is unfair to expect him to know better.

Of course, his "Rolls-Royce" civil service could have told him, except that Rolls-Royce cars is now owned by the Germans. That is perhaps why Mrs Merkel was in the know and Mr Cameron wasn't.