UKIP: the "cult of Farage" 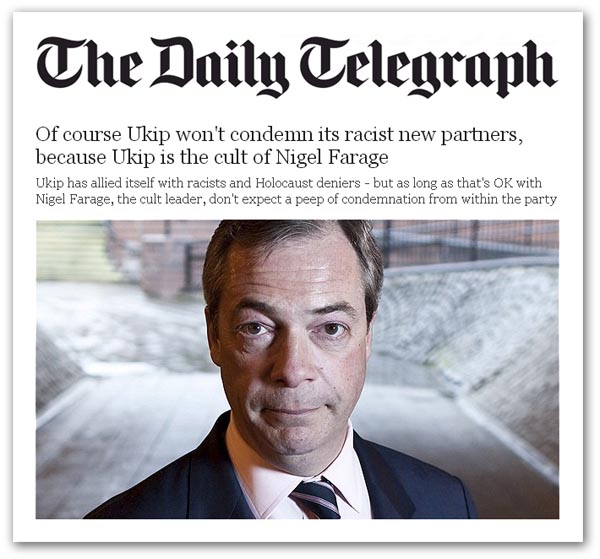 There I was, quietly working on a technical post about the latest developments in the WTO and up pops Dan Hodges outing UKIP as "the cult of Farage".

Interestingly, the Telegraph hasn't opened up the piece to comments and, for once, I don't blame the paper in the slightest. We're all sick to the hind teeth of the tedious, repetitive UKIP claque which drowns out the sensible voices in the party.

It is good to see the phrasing coming out into the open again, though, even if Compleat Bastard got there earlier, and the Telegraph beat us all by a country mile.

Despite my supposed "bitterness", EURef was relatively late into the fray with this description, coming to it only in June of this year. That piece, however, was especially to the point, as every time this blog writes critically of Farage, we can almost guarantee that some Muppet will crawl out of the woodwork with the "bitter" meme, straight off the UKIP playlist.

Hodge's outing, however, has been a long time coming. In general terms, we were writing about the cult of personality and UKIP in June 2013, cross-referring to this.

Gradually, though, the message has spread, not least after the spectacular u-turn by Suzanne Evans, one of Farage's more recent sock-puppets – although the loathsome New Statesman was banging the drum in April. Yesterday, Compleat Bastard was noting how Left and Right were now combining (at last) to focus on UKIP, but again they are late to the party.

This morning I was writing a private e-mail, telling my correspondent that I saw in UKIP (as fashioned by Farage) something very similar to the 1930s British Union of Fascists (BUF). Both parties had somewhat similar aims - take out "immigrants" from Farage's speeches, and substitute "Jews" and there isn't so much difference.

It is as well to note that Mosley had the full support of the Daily Mail and the much of the rest of the British media, and at its height, the BUF had a larger membership than does UKIP at present.  But, like UKIP will, the BUF disappeared without trace, to leave only a footnote in history.

The essential problem for UKIP is that it is a party without policies – almost a contradiction in terms. The very life-blood of politics is policies, which means that UKIP is fundamentally empty. That leaves it wide open to the demagogue, which Farage has become, turning the organisation into a cult – so rightly diagnosed by Hodges.

This, of course, will have no effect whatsoever on the cultists. So besotted are they with The Dear Leader, that he can do no wrong. Anything he says or does is alright by them, and anyone who has the temerity to criticise Him is beyond the pale.

Sadly – for the cultists – it cannot last. The empty vessel may make the loudest noise, but in the crucible of British politics, its very emptiness will be the undoing of the Farage cult. Whether UKIP will survive the experience is anyone's guess, but if it doesn't, a lot of good people will have been betrayed.