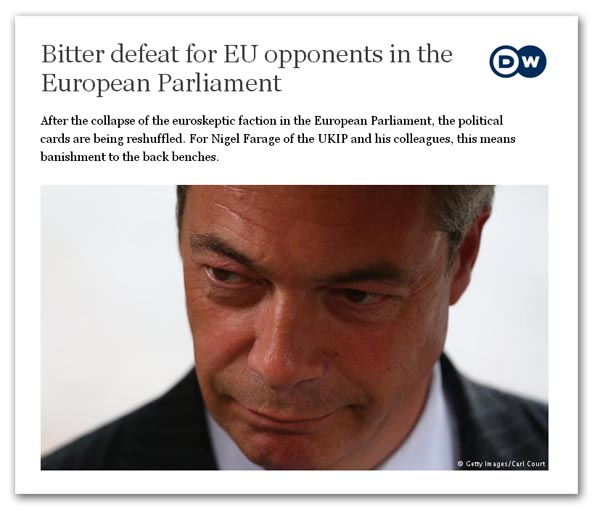 We had an extremely good meeting in Rotherham yesterday, with some good, high quality people – most of them UKIP members. That reminds me of why I joined UKIP in the first place, and then how much the party has been let down by its current leadership.

I will write further about the meeting, organised by local UKIP member John Wilkinson, but first need to address one particular issue pointed up earlier on this blog and now raised by Deutsche Welle as representing a: "Bitter defeat for EU opponents in the European Parliament".

This was the collapse of Farage's "Europe of Freedom and Direct Democracy" (EFDD) group, a "defeat" that is in fact extremely serious for UKIP in general, and Mr Farage in particular. And while it has been given some coverage in the British media, such as here in the BBC, the event hasn't had a fraction of the coverage that it should have received.

One suspects that some of the reason for this is that the media is completely missing is the scale of the defeat, with the BBC, for instance, wrongly pointing up that the groups are (only) paid €59.8m (Ł48m) from the European Parliament Budget.

This they are taking from Chapter 4 of the budget (p.77), which covers "secretarial, administrative and operational expenditure", plus expenditure on "political and information activities conducted in connection with the Union's political activities".

However, they haven't realised that the group staff are paid from a different budget line, covered on p.17 over the staff budget of €936 million, and not separately identified. You can, though, see from page 72 that just over 1,000 staff members are employed by the EP on behalf of the groups, without the specific sum being identified.

This equates to roughly 1.5 members of staff to every MEP. For technical reasons, it actually amounts to slightly more, which means that the UKIP delegation gets about 40 extra staff working for them in Brussels, off the books so to speak, paid for out of the European Parliament budget.

There are also other budget lines which incorporate expenditure by political groups (for instance, see 3.042 on p.55) and when you add these and the staff costs in, the expenditure picture is very different from that portrayed by the BBC and other media.

As the European Parliament itself points out (and it should know), some six percent of the EP budget of € 1,756 billion is allocated for political group activities. This works out at roughly €105 million a year, or a "dowry" of €140,000 per MEP. For the five years of the coming parliamentary term, that means that UKIP – with its 24 MEPs – was due to get about €17 million (Ł13 million) in cash and kind.

As independent members, known in EP jargon as "non-inscrits" (NIs), they lose the group staff, and only have a small administrative staff to rely on, serving the whole NI – currently just over 50 MEPs. These are provided by the parliament. The 40 or so political staff that UKIP had working for them are lost (although a small number may be re-employed on administrative duties).

To each of the NI MEPs, the residual budget is allocated individually, about €43,000 each, an effective loss of about €100,000 per MEP. Added up over the term, that means Farage's UKIP loses about €12 million, and Farage loses control over what was once a central budget. Each of the MEPs become responsible for spending their own budgets.

This loss, of course, is on top of the privileges afforded to Farage himself, as president of the group: the personal chauffeur-driven limousine; the spacious office suite; membership of the Conference of Presidents; his front-row seat in the EP; and the first bite at the cherry when it comes to speaking allocations.

These visible losses, though, pale into insignificance when it comes to the financial loss. It was group money in 1999 that kept the show on the road, an invisible dowry over which the national party had no control and scarcely knew existed.

Basically, within the constraints of the EU rules, the group money was in the gift of the group president, which for this session would have given Farage €12-million-worth of leverage which he has now lost. Apart from weakening UKIP, it considerable weakens Farage's own personal power base, as he loses all that taxpayer-funded patronage.

Why the group collapsed is another story, but one factor has been Farage's own behaviour. Angered by his posturing (even if it plays well to the domestic audience), the "colleagues" have been progressively tightening the group rules, and in such a way as quite obviously to discriminate against Farage's group. Now it has collapsed, you might say that this is Van Rompuy's revenge.

It didn't have to be that way. When I joined the parliament in 1999 as group staff, I proposed that we should avoid fouling the nest in Brussels. Our battle was not with the "colleagues" but with our own government. Even if we were disliked, I averred, we should at least be respected.

That line held until I left in 2003, but relations between UKIP and the EP have since deteriorated – largely because of a number of high profile YouTube videos. It is a matter of judgement as to whether they were worth it, but at least we are now able to put a price tag on them - €12 million.

And, with Farage now consigned to the back of the hall, and his allocation of speaking time limited to such riveting subjects as the reform of the comitology system, and the CAP vegetable regime (the sort of thing we were getting in the 1999 term), his YouTube days are probably over.

It was good while it lasted. But UKIP members may now wonder whether they have been well-served. Effectively, Farage has cost his own party €12 million.