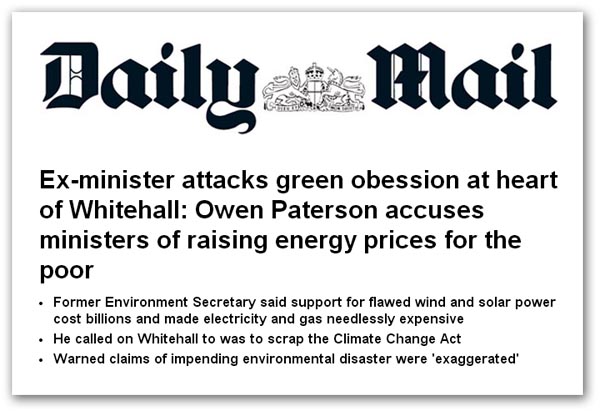 So, after all the hype, we get the lecture and the reports now follow. Dellers has done quite a respectable job but, unlike Booker, there's far too much emphasis on climate change and not anything like enough on energy. From some reports, you wouldn't even know the speech had been about energy policy.

Then, you get the likes of the Mail which tells us that Mr Paterson claimed the effects of climate change had been "consistently and widely exaggerated", and policies to encourage onshore wind farms will cost Ł1.3 trillion by 2050.

This wasn't what was said at all – the cost is for "decarbonisation" of the electricity supply but, true to form, this wasn't mentioned at all. I think some of the issues raised are so foreign to the media that they simply can't cope with them. At least Mr Paterson, in the BBC's Radio 4 Today programme, was allowed to say that the process, largely based on renewables, simply wasn't deliverable.

But to get the Mail to run the Ł1.3tn figure is an achievement. Earlier, this was set at Ł1.1 trillion, only to be savaged by Richard Black. He argues that the source puts the cost of keeping the lights on to 2050 without any climate change targets at Ł760 billion.

Black is evidently desperate to play down the massive costs - which the government itself dare not put in the public domain. With an emissions target but no renewables target, the figure "only" comes to Ł960bn, he says. The larger sum comes if you have emissions and renewables targets. So, he says, the marginal costs are not as big as that Ł1.1 trillion figure might imply, especially when you consider that they're spread over nearly 40 year.

Here, though, Black has blundered into a trap of his own making. He is exploiting that fact that there is no agreed figure on the total costs of the "decarbonisation" policy. There isn't even any agreement as to how it should be achieved - not surprising when, as Mr Paterson puts it, it is simply not "deliverable". No wonder the government is so reluctant to tell us how much is being spent on a policy that can only fail.

But this is where the Ł1.3tn figure comes in. Mr Paterson has found other sources which are prepared to be more candid about the costs. Ironically, one is the European Commission. It estimates that the additional investment to achieve decarbonisation (over and above that which would be spent anyway) could run to €304bn a year, between 2011-2050, for the whole of the EU.

From this, it is relatively simple to work out the UK expenditure, based on the relative proportions of the GDP. That's where Ł1.3tn comes from, some Ł200bn higher than the original figure used - and wholly attributable to "decarbonisation". Furthermore, the Commission is not alone. The prestigious International Energy Agency estimates the additional global costs at $44tn. Apportioned on the basis of the UK’s contribution to global GDP, this comes out at Ł1.3tn as well.

Thus, the higher Ł1.3tn is a much more secure figure than the Ł1.1tn estimate, coming from an authoritative source and triangulated by another. Even then, my guess is that this is on the low side, but at least it is largely critic-proof. The bizarre thing, though, is that the sum is about the size of the National Debt, so we're effectively doubling it, for the single purpose of running ourselves out of electricity, and ensuring that the lights go out.

Moreover, it says, the course set by the Labour leader and his Lib Dem successors – obsessed by inefficient wind turbines and biomass that causes more pollution than coal – cannot possibly meet the Act's emissions target, while failing utterly to provide for the UK's energy requirements. Thus, the message is getting out into the open.

Only then, however, are we allowed some inkling of the "alternative means of achieving cleaner energy more cheaply". The paper tells us that Mr Paterson is calling for  "more and smaller nuclear reactors, exploiting shale gas and making use of the heat produced by power stations". At the very least, we are told, "his ideas deserve full examination", even if the paper stops short of doing that .

Nevertheless, the Ł1.3tn has lodged in the media consciousness. "When MPs of all parties voted in 2008 to support Mr Miliband's law, it hardly occurred to them that they were making the most crippling commitment in our peacetime history", the paper says, then adding the essential words: "The Climate Change Act must surely be amended or repealed".

Putting the boot in, it then concludes that, "if Miliband could pose such a huge threat to our children's prosperity as a mere climate change secretary, heaven help us if he becomes prime minister".

Unlike the news article, therefore, this editorial is quite encouraging, elevating the political profile of energy policy, even if we are not allowed much detail about the alternatives. But, to put the scale of the issue into context, the Marshall Aid programme for the whole of Europe was only about Ł200 billion (in today's money). Mr Miliband's Act is set to cost us more than six times that amount.

Perhaps our senses have been dulled by the constant repetition of billions and trillions, to the extent that such large figures no longer have the effect they should. But, if ever there was something to be alarmed about, it is this. To pursue their fantasies about climate change, our masters are driving us into penury.