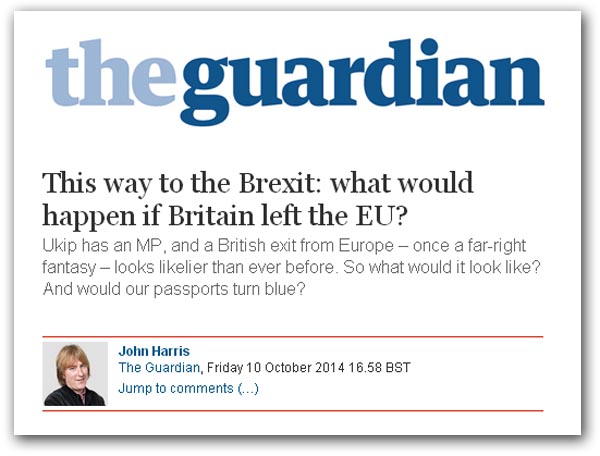 Still up of the UKIP website is its latest post-Brexit position statement. This time, I've reproduced the whole thing:

We would review all legislation and regulations from the EU (3,600 new laws since 2010) and remove those which hamper British prosperity and competitiveness.

We would negotiate a bespoke trade agreement with the EU to enable our businesses to continue trading to mutual advantage.

UKIP would not seek to remain in the European Free Trade Area (EFTA) or European Economic Area (EEA) while those treaties maintain a principle of free movement of labour, which prevents the UK managing its own borders.

We would reoccupy the UK's vacant seat at the World Trade Organisation, ensuring that we continue to enjoy "most favoured nation" (MFN) status in trade with the EU, as is required under WTO rules.

Had I reproduced it in full when I referred to it earlier, I might have picked up the inherent contradictions. As it was, I took the last paragraph which, together with the first, which essentially means that UKIP are seeking to adopt the WTO option (with certain caveats).

However, tucked in to the script is the second paragraph which tells us UKIP "would negotiate a bespoke trade agreement with the EU to enable our businesses to continue trading to mutual advantage". This, effectively, is a version of the Swiss Option, which means, effectively, that they are seeking to adopt this and the WTO option together, something that I did not expect.

Probably, the reason I did not take this on board is because the two options are normally considered incompatible. The reason for this is that, under WTO rules, if you adopt MFN status, when you grant someone a special favour (such as a lower customs duty rate for one of their products), you have to do the same for all other WTO members, under what are termed the non-discrimination rules.

Within the framework of a regional free trade agreement (such UKIP is suggesting with the EU), where special concessions are agreed, members are allowed a waiver under WTO rules, which permits them to discriminate against non-members.

If this waiver is not applied, all the concessions applying to members of the trade agreement would have to be granted to the rest of the UK's trading partners. In effect, therefore, the EU would then be in a position to dictate the UK's external trade policy, and prevent it doing special deals with other partners, without also passing on to the EU any concessions given to them.

Being forced into MFN status is precisely what Kenya is complaining about, in respect of its dealings with the EU, and here is UKIP wanting to commit voluntarily to a distinctly unfavourable position. Even I didn't think the party was that stupid.

Back in amateursville, we see UKIP wanting its "bespoke" trade agreement with the EU – presumably within the ambit of Article 50 negotiations. Never mind, though, that it took the Swiss 16 years to conclude their limited "bespoke" agreement with the EU and the negotiations for the EU-Canadian Comprehensive Economic and Trade Agreement (CETA) started in June 2007 and still hasn't been concluded. How long does UKIP think it will take to negotiate its "bespoke" agreement?
Untouched by reality, UKIP then gets the idea that it can remove EU regulations which hamper British prosperity and competitiveness, but not a thought is given to those regulations (such as all the Codex rules) which are agreed at international level, which we would have to adopt anyway, even if we left the EU.

But then there is the principle of "national treatment" under WTO rules, which requires members to treat imported and locally-produced goods equally. Thus, if specific rules are applied to imported goods, they – or rules no less rigorous – must apply to domestic goods.

Since this rule also applies to the EU, when importing goods from outside the Single Market, EU member states have to obey internally all the rules (that are relevant) which are applied to imported goods.

In order thus to avoid conflicting regulatory codes between trading partners, the EU seeks regulatory convergence (where all parties apply the same rules, externally and internally), and to make this happen applies the doctrine of "conditionality", making such convergence a condition of agreeing a trade deal.

Currently, this is why there is such a problem with TTIP, where two trading giants – the EU and the US – are having serious problems in seeking regulatory convergence. In then seeking to slash EU regulations, UKIP is going entirely against the grain, and is unlikely to secure any agreements with the EU if it starts making deep cuts in what is still a common regulatory code.

Just to add to the complications, if such cuts are made, the UK could be in breach of WTO rules if it then tried to enforce international standards on imported goods. If it doesn't apply those standards, though, it could end up as the dumping ground for sub-standard goods from around the world.

All of this, though, passes UKIP by. They have their narrative, and nothing is going to stop them parading their ignorance. Than, adding confusion to the ignorance, we have UKIP's Paul Nuttall talking to the Guardian about Brexit.

As he and his party see it, this newspaper is told, the UK should get out as quickly as possible, and replace the economic aspects of our EU membership with "a simple free trade deal, either with individual countries or with the European Union as a whole".

It is Nuttall's good fortune that writer John Harris is probably as ignorant as his interviewee on the finer points of this issue, thus allowing Nuttall to argue that this wholly unrealistic aspiration "would put us in a comparable position to Switzerland, whose dealings with the EU are framed in a series of bilateral treaties – but with one crucial difference".

"We're not Switzerland", Nuttall triumphantly declares. "We're the seventh-largest economy in the world, and we're Great Britain. And because we run a huge trade deficit with the EU, they'd need us far more than we would need them".

This is the great mantra, the get out of jail free, that covers every eventuality. But, for the 27 remaining trading nations in the EU, it simply would not wash. No matter how much the UK is "needed" – and perhaps not as much as Nuttall thinks – the EU is not going to breach its own fundamental rules, or those of the WTO, just to accommodate the UK.

And the thing is, we may have a trade deficit with the EU but, in the absence of a trade deal with the EU, is the British government really going to stop British traders importing BMWs and Mercedes, and all the other high value goods we get from the Continent?

But, in the UKIP book, anything goes. Their 24 MEPs – of which Nuttall is one – are over the five years of the parliamentary session, going to cost us the best part of Ł140 million, and this is what we get for our money: incoherent amateurs, man-in-pub blatherers with not the first idea of how the world works.

And the interesting thing is that it is this writer who gets complaints for being "negative" about UKIP.