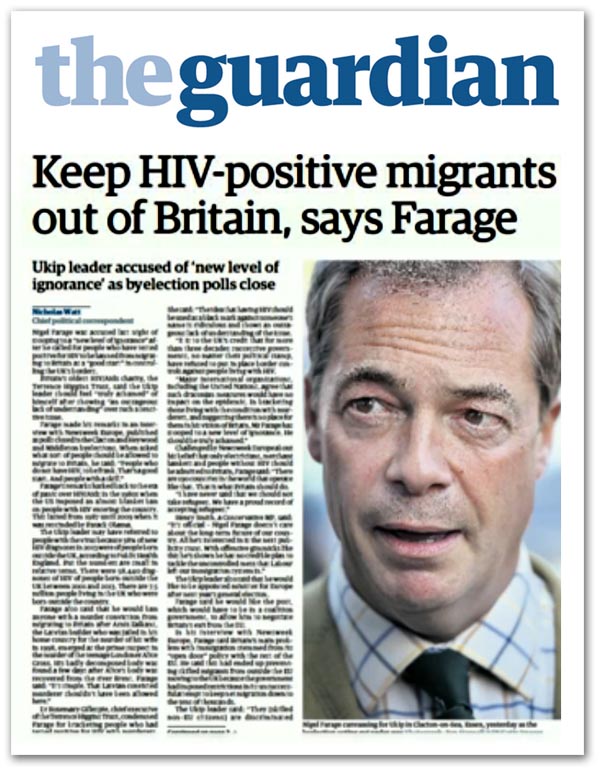 Commemorating what may well be UKIP's first elected MP, the Guardian offers on the front page of its print edition a story about Farage wanting to ban HIV-positive immigrants, leaving him to be accused of stooping to a "new level of ignorance".

This is a measure of the state of the political debate, which has UKIP irrevocably locked in as the anti-migration champions, a role it is happy to take on board as it publishes a website statement setting out its stall on immigration, saying:

UKIP would not seek to remain in the European Free Trade Area (EFTA) or European Economic Area (EEA) while those treaties maintain a principle of free movement of labour, which prevents the UK managing its own borders.

Never mind that the UK isn't actually in EFTA, so it could hardly remain in, after departure from the EU, and gloss over, if you will, that EFTA doesn't actually have a treaty agreement with the EU which maintains the principle of free movement (the agreement is with the NIL members). This is the sort of facile amateurishness one comes to expect from UKIP.
Simply focus on the issue that this makes UKIP a serious liability should we ever get an EU referendum, as the party abandons any idea of continuing with the Single Market, and wants to leave our trading arrangements in a shambles. I've updated Flexcit, reworking Chapter 6 (page 85), to take account of this development, and will have more to add later.

But for that, Douglas Carswell back in Parliament should have been an asset to his new party- even with a reported turnout at 51.2 percent. One MP, properly organised, can be a fearsome antagonist. I recall Owen Paterson in oppostion taking the government apart over Bovine TB, with 600 Parliamentary questions, a record for one subject.

But with his party totally compromised, and tactically inept, even Carswell's self-acclaimed acumen and experience could be to little avail. UKIP is working itself out of the script, standing for something which could lose us a referendum.

Meanwhile, in Heywood and Middleton, where a second contest has been declared, the turnout has been reported at 36 percent. Not even (or especially) UKIP could energise the by-election, that Labour won on 41 percent of the vote, 600 votes ahead of the Farage party, after a "bundle check" being declared. That means it sends its MP to Parliament on a popular mandate of 14.8 percent.

Labour sources were claiming through the count that the Conservative vote has dropped to ten percent, down from 27.2 percent in 2010, with the Lib-Dem vote collapsing. If the bulk of the displaced vote has gone to UKIP, it would blow out of the water any claim that the Farage party is "ripping lumps" out of old Labour. Labour is doing what it usually does in these events - staying at home.
In the long run, however, I see UKIP as an irrelevance – which it needs to become - petulant children squabbling about how badly treated they feel by the LabLabCon in Westminster, with not the first grown-up idea of what they would do in their stead.
As to Clacton, it wasn't worth staying up to wait for the result of what was a foregone conclusion, leaving the morning news that Carswell had "swept" to victory with 30.5 percent of the popular vote, in what could hardly be considered a ringing endorsement of his idea of how to spend public money.

With the collapse of the Conservative vote, he took 21,113 votes (59.7 percent of those that voted) ahead of the Tory candidate Giles Watling on 8,709 votes. The Conservative vote fell from the 53 to 24.6 percent on a dismal turnout of 51.2 percent. Popular movement, this is not.

In Carswell, though, we have a man who is at odds with his own party on leaving the EU. He favours the "Swiss option", telling us in January that the Swiss "have control over their own borders by virtue of being outside the EU".

The Swiss, of course, signed an agreement on 21 June 1999 with the EU on the Free Movement of Persons. This extended the right of free movement to citizens of EEA Member States, complemented by the mutual recognition of professional qualifications, the right to buy property, and the coordination of social security systems. This gave them a posted immigration rate of 23.3 percent, as opposed to the UK's 13 percent, and an ongoing (and as yet unresolved) constitutional crisis, following a referendum requiring the federal government to breach the free movement agreement.

Thus, as it stands, we have UKIP going for the WTO option, while their only MP, Carswell, plumps for something else, the nature of which he shows no sign of understanding. His famous "plan" (p.125) calls for: "Replacing EU membership with a Swiss-style bilateral free trade accord". Carswell and his new master need to get their acts together. In particular, Mr Farage needs to have some stern words with his newest (only) MP, about this little gem:

Immigration, many Outers seem to believe, is our strongest card. It links one of the public's number one concerns with the question of our EU membership. Perhaps. But the Out campaign must not descend into any kind of angry nativism. First and second generation Britons must feel as comfortable voting to quit the EU as those whose ancestors came over before William the Conqueror. An independent Britain is not going to have no immigration. It will have democratic control over immigration – like Switzerland, where one in five workers is non-Swiss. Or Australia, where thousands of new arrivals become new Australians each year.

Mr Carswell's "democratic control" gets him 23 percent in the case of Switzerland, and 27 percent in Australia, as against 13 percent in the UK. In the EU, only Luxembourg's migrant levels are higher (see table below, which also shows that the UK has twice as many non-EU migrants as those from the EU - click to expand). 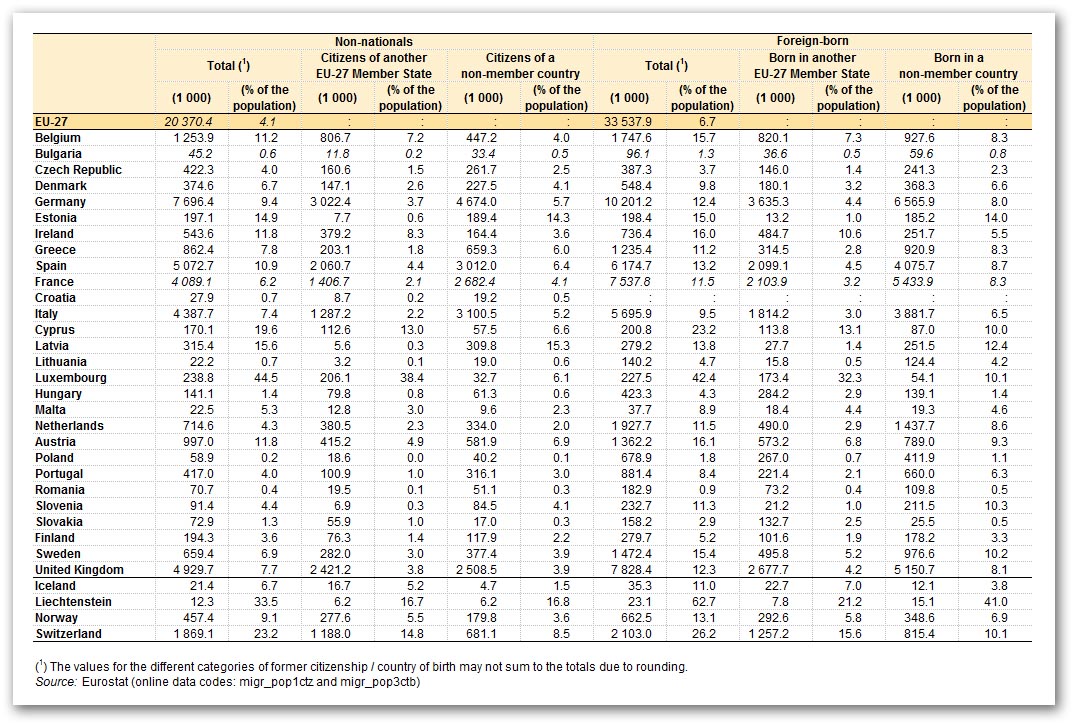 In the longer-term, we face the prospect of more ill-considered "policy" statements emerging from UKIP, of the same ilk as the party's rejection of EFTA/EEA, leaving the party in its usual quagmire of inconsistency. Thus, the more successful in its own terms that UKIP becomes, the more work it will create for the rest of us in trying to undo the damage it is doing.

Weary as I am with having our own side as the biggest handicap in our fight, that really isn't anything to celebrate. Every "victory" simply gives UKIP yet another opportunity to undermine the rational case for managing our departure from the EU. That leaves us, Kasserine Pass style, having to fight through our own side to get to the enemy. We can defeat the enemy, but I'm not so sure about our own side.