Ukraine: a proxy war in the making

One was said to be a Larom system developed by Aerostar of Romania and Israel Military Industries to meet requirements of Romanian MoD, and the other the Spanish Teruel 3. Both are 40-tube multiple rocket launchers based on the Soviet BM-21 "Grad".

One of the aircraft delivered a large quantity of ammunition for the MLRS, and the launchers moved under their own power on the bypass road in the direction of Starobelska, north of the rebel city of Luhansk.

This, according to Pravda, follows a deal reached between Ukraine and a number of NATO member countries on the supply of high-precision weapons, announced by president Poroshenko at the NATO summit last week.

Kiev has already received about 15 million for the modernization of its army and for strengthening its "defence", with NATO Sec-General Anders Fogh Rasmussen saying that Ukraine has always supported NATO, and it's now time to see the alliance supporting Ukraine.

Pravda notes the "double standards" of the Western Alliance, in complaining of the Russians supplying the rebels with arms, with NATO also ignoring the fact that it is not safe to supply even "precision weapons" to Ukraine, given the lack of professionalism of the Ukrainian military.

Creating a need for ammunition, NATO is also likened to a drug dealer who initially supplies his addict with free drugs until consumption reaches the desired level, when the bill is presented for the higher "dose". 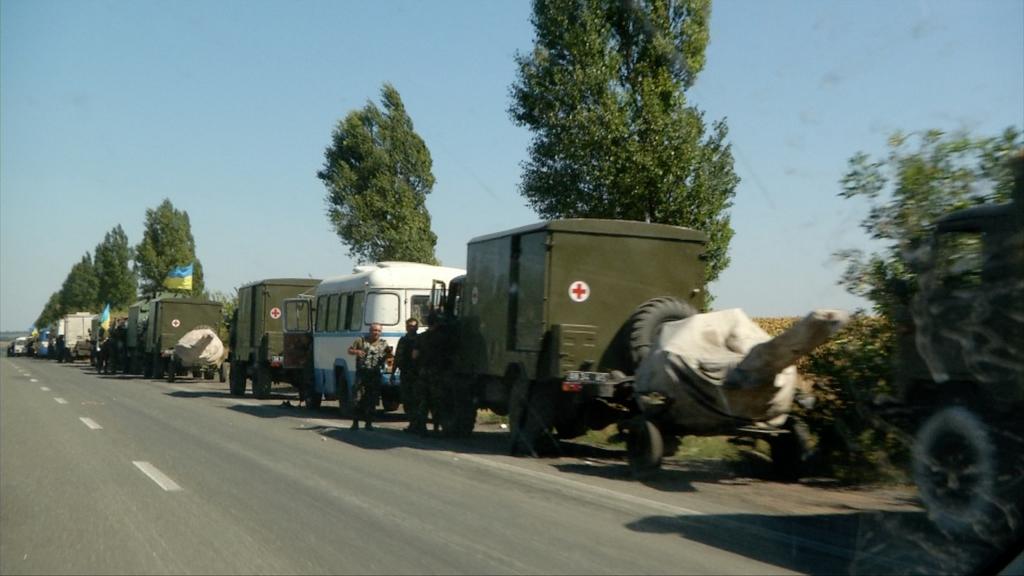 And as a controversy builds about the apparent use of Red Cross marked Ukrainian Army vehicles to tow artillery (above), Wikileaks has released a previously secret cable sent in February 2008 from the US Ambassador in Moscow, warning that the Russians would act adversely to attempts to bring Ukraine into NATO.

In Ukraine, he wrote, "these include fears that the issue could potentially split the country in two, leading to violence or even, some claim, civil war, which would force Russia to decide whether to intervene".

No specific mention is made of the EU, but either way, the implications of Western intervention in Ukraine were well signalled. Foreign Minister Lavrov is said to have stressed that Russia had to view continued eastward expansion of NATO, particularly to Ukraine and Georgia, as a potential military threat.

While Russia might believe statements from the West that NATO was not directed against Russia, when one looked at recent military activities in NATO countries (establishment of U.S. forward operating locations, etc.) they had to be evaluated not by stated intentions but by potential.

Lavrov had told the Ambassador that maintaining Russia's "sphere of influence" in the neighbourhood was "anachronistic", and acknowledged that the US and Europe had "legitimate interests" in the region. But, he argued, while countries were free to make their own decisions about their security and which political-military structures to join, they needed to keep in mind the impact on their neighbours.

This is something Ukraine, the EU and NATO members consistently failed to do, and which NATO members currently supplying weapons to Ukraine are also failing to do. Whatever "legitimate interests" the US and Europe might have in the region, arming Ukraine in a war against Russia turns it into a dangerous proxy war.

Rarely has the behaviour of our own "side" seemed so inept, and rarely have we been so lacking in agreement with the action of our own government in backing NATO and the EU. Whatever the rights and wrongs, we see no value whatsoever in making a dangerous situation even worse.

In that, it seems, our concerns are shared by Tony Brenton, former British Ambassador to Russia, whom the Telegraph allows to say: "The whole affair raises serious questions about the competence of Western policymaking towards Russia". It's time, he says, to back away from the Russian wolf.