Ukraine: the answer could not be clearer 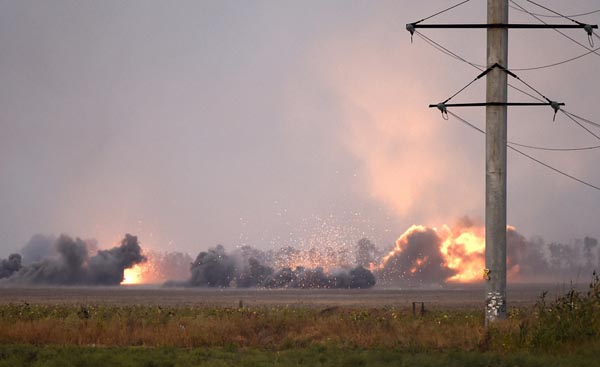 NATO delegates, ensconced in its temporary luxury home in Newport (which must make a pleasant change from their decaying home in Brussels), must have been overworking their mini-bars. Apparently unaware of the real situation – or choosing to ignore it – they are "telling" the Kremlin to pull Russian troops back from Ukraine and stop supplying separatists with "arms, fighters and funds".

Even as Rasmussen was speaking, however, and Cameron and Obama and other senior NATO were discussing with Ukrainian president Petro Poroshenko the possibility of a ceasefire, Putin was already delivering his response (pictured above).

In the major port town of Mariupol of the Azov Sea, major fighting broke out yesterday, part of the very obvious Russian stratagem of clearing a land bridge through from the eastern boundary, into Ukraine, linking to the Crimea.

Ever since the Crimea broke from the Ukraine, it was always going to be the case that Russia was going to build a new buffer between its territory and the west-leaning Ukraine. And there is nothing either NATO, its members or Ukraine were ever going to do to stop it.

As we have seen over the last week or more, and especially after Ukraine forces started shelling civilian buildings, Russian intervention has brushed aside the Ukrainian Army, which is now in a state of collapse, and its deployed formations barely constituting a coherent force.

Nevertheless, there seems to be little recognition of this reality in the councils of NATO. President Obama, in particular, seems unable to come to terms with the limitations of power, and that the US writ does not hold in Putin's back yard.

Thus, while the White House, Obama and leaders of Germany, France, Britain and Italy have agreed on the sidelines of the NATO summit that Russia should face "increased costs" for its actions, they will not succeed in diverting Putin from his current path. Even the dozen countries who will later this month join a Ukraine-US Army exercise in Lviv, Ukraine – a few miles from the Polish border - will have little effect .

Meanwhile, Ukraine's apparent enthusiasm for a cease-fire must surely reflect the weakness of its military position. Putin, one assumes, will stand down his men, when he is ready.