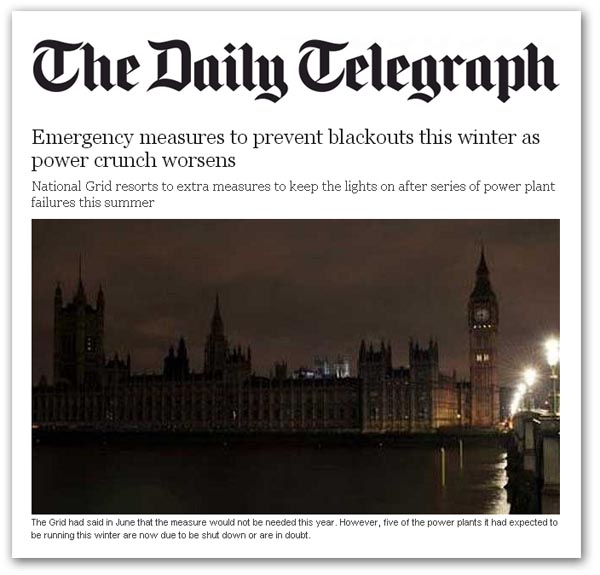 Last year, we were assailed with several stories about how the electricity was going to run out over winter. However, this year, it seems, the scare is starting early.
The early bird is Emily Gosden, who is telling us that in June, energy regulator Ofgem estimated there would be between 2.7 gigawatts (GW) and 5.4GW of spare operational power plants on the system – a capacity margin of between 5-10 percent over and above peak winter demand.

But, she says, the situation has deteriorated as 3.67GW of power plants are now in doubt or shut down as a result of a series of incidents – threatening to wipe out the spare margin unless the Grid recruits extra plants.

However, even when last year it was calculated that there was a 1 in 20 chance of a peak demand of 59.0GW, and posted generation availability could fall to 58.8GW – a potential shortfall, on paper – there were no concerns of there being blackouts.

This is because the contracted winter period STOR is 3.5GW, plus the system frequency response was to be brought up to 1.9 GW. Then there were Maximum Generation Contracts in place for Winter 2013/14, providing up to 1GW of extra generation in an emergency – which is not recorded on declared reserves.

Thus, last year we had a "hidden reserve" of over 6GW, to cover a worst case scenario, with the possibility of invoking "inadequate system margin" warnings, which give generators advance warning of problems, enabling them to reschedule planned shut-downs and to bring mothballed gas plants back into use. Those would have given us another 4GW if necessary.

That meant that last year, we had a reserve of 10GW in the system, over and above the capacity margin – which was never in fact needed. As the winter progressed, the scare stories evaporated, and we heard nothing of any blackouts.

Concerns were expressed in August though, after a fire damaged the Ferrybridge coal-fired power plant, and four of EDF energy's nuclear reactors were taken offline due to safety concerns. Nevertheless, these are due to return later this year, which means that the Ofgem estimate issued in July still stands.

This tells us that the margin range for winter 2014/15 has increased to between 5-10 percent, up from its 2013 assessment which put the range from 3-7 percent. Even the worst case scenario only has capacity margins tightening to two percent.

Actual volume requirements are modest, with a requirement for only 330MW, which means that the Grid is not needing major input – unsurprising given it still has at least 6GW of hidden 10GW reserve.

However, it now seems that shortfall scares are part of the legacy media mainstream, so we can expect a repeat run of stories over the next few months. Meanwhile, I have no plans to buy a generator.