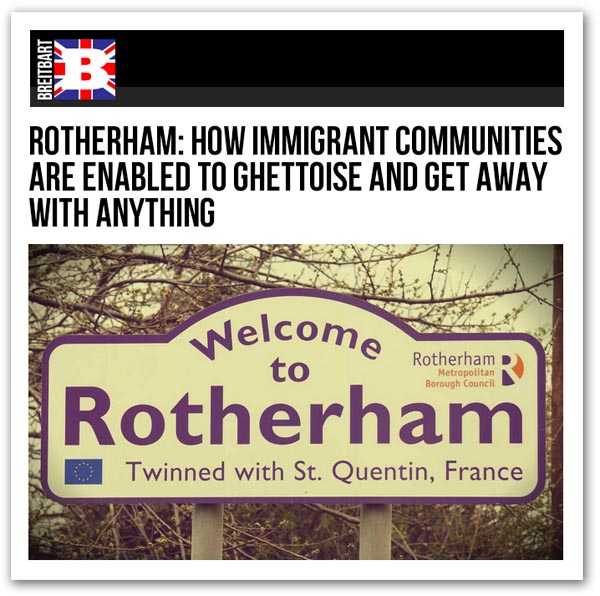 One of the most enduring lessons I've ever learned in relation to problem-solving is that nine parts or more of the solution lie in defining accurately the nature of the problem, and the causes of it.

Talking to Dellers about the nature of the problem in Rotherham, and the generality of the child sex slavery affairs which have riven our towns and cities, he asked me to write on some of my observations, which were published yesterday on Breitbart.

Much of what I wrote was motivated by precisely that enduring lesson, which makes it so instructive to see comments dismissing the work as "left wing drivel". But, more worrying, there is a strong constituency which would attribute this problem entirely to one thing – Islam. Nothing else is of any significance or relevance.

This even mars this otherwise valuable report which attributes the motivation almost entirely to "Islamic doctrine", despite it also noting the "hugely disproportionate presence of 'Asians', particularly those from the Islamic state of Pakistan".

The point, of course, is that there is more than one common factor here. There is Islam and there is Pakistan. And, hidden from sight in the Pakistani communities prone to this behaviour is tribalism. While Islam is a powerful motivator and behavioural modifier, no studies of these communities can be complete without taking into account tribal mores.

Yet, in the report to which I refer there are 416 references to Islam, but not a single mention of the tribe, or tribalism in any form.

A lot of these communities, in fact, are Kashmiri, and many are Pashtun in origin. Any number of scholars have expended huge effort on understanding the relative effects of Islam and the tribal code of Pashtunwali, and the considerable differences between them. For contemporary workers to ignore the possible effects is illogical, and no analysis can be complete without at least considering the role of tribalism as a behavioural determinant.

And nor are we just talking about Pashtuns. Most other tribal groupings have "honour codes" and many of these also co-exist with Islam. In these situations, the codes often pre-date Islam, so the religion forms a veneer, layered over the original codes. And typically, where these is conflict or ambiguity, the codes take precedence over Islamic teachings - which themselves are variable.

It was this that I sought to explore in my Brietbart piece, observing that the failure of our police and officials to understanding these dynamics have contributed to the lack of early and effective action. Putting it altogether, though, at the heart of these matters is a failure of law enforcement and, beyond that, sequential failures of complaint systems.

Of these men that have committed so many heinous, I take them to be a cultural offshoot, locked in primitive, obsolete tribalism, to which fundamentalist Islam is but an overlay, a veneer.

This is an offshoot that hates and fears its own women, and then gets its sexual gratification from abusing the women of other races. It is a sterile creed that is going nowhere. It can destroy, it can cause endless misery, but it cannot build or create. Hence, I say, fundamentalist Islam is the religion of losers.

Their religion is attractive to them because they were losers first, and can eke out justification for their actions in ancient scripts. It is not the cause of their inadequacies. It is a symptom of them.

But, I conclude, their criminality survives and prospers, not because of their inadequacies, but because of ours – reinforced by that profound ignorance which plagues our officials and administrators. If our officials had had a better understanding of what they were dealing with, and then enforced the law, much of which came to pass would never have happened.

In my view, therefore, putting it all down to "Islam" is simplistic to the point of being dangerously misleading. We need to do better.